You are using an out of date browser. It may not display this or other websites correctly.
You should upgrade or use an alternative browser.

BoxsterCy said:
Didn't see this noted anywhere. Some gal from Poland of all places for us to be recruiting for 2021.

I live in an area with the highest precentage of citizens of Polish heritage outside Poland. Jokes aside, and mixing metaphors, she looks like a slam dunk addition.

This is a really nice 5-min recruiting video for our Volleyball program. I hope everybody gets healthy and our team can go back to the NCAA tourney this fall.

Of all the ISU Athletics programs, Volleyball is the only one that posts a father appreciation video on Father's Day. Nicely done!

Preseason All B12 VB players for Fall 2021 released today. Holthaus and Herrera named to the team as well as IA native Aliyah Carter from KSU: 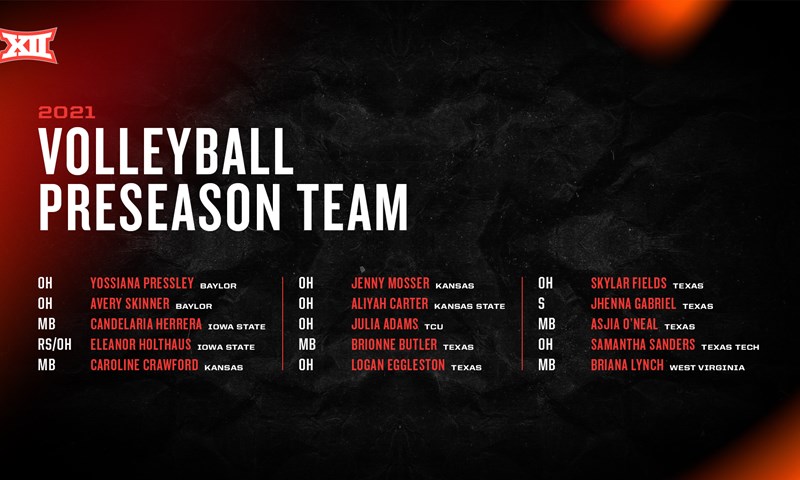 The Big 12 announced its 2021 volleyball preseason awards, including the All-Big 12 Team, Player of the Year and Freshman of the Year.

We are picked to finish 5th in the preseason poll. I hope we can exceed the expectation.

That is where I would put us without seeing how any of the new pieces will work. I hope the libero situation is sorted out and we can pass a ball to a setter whom I have never seen play at club level or college level.

Congratulations to Candee for making the 12-player roster of the Argentina Volleyball National Team for the Tokyo Olympics! Your dream has come true. AMES, Iowa – The Iowa State volleyball program announced its schedule for the 2021 campaign on Tuesday, a slate which will once again feature the regular mix of strong non-conference foes and the difficult Big 12 schedule.

The official 2021 Volleyball schedule for the Iowa State University Cyclones

That non-con schedule appears to be brutal. It will definitely help the RPI but if the overall record is sub .500 as a result, RPI won't make a difference.

I don't care for continuance for the COVID driven conference match doubleheaders but it definitely is a money saver for all of the non-rev VB programs.

No reason to think we will make the NCAA tournament with that schedule. Other teams made adjustments against us we didn't seem to make any on day two.

If saving on travel means we keep volleyball alive so be it.

Piper is to continue her volleyball career in Porto, Portugal. May she find great success in her new adventure!

One major flaw is that the Portuguese Club got confused with ISU and UI in their official tweet so we have to correct them in our VB tweet. Piper Mauck is the latest addition to AJM/FC Porto, which this year will be coached by Spaniard Carlos Carreño.

The 22-year-old American setter signed for a season and is the 12th addition of the blue and white emblem.

First experience in Portugal: "It will be my first time in Portugal, but not in Europe, because I visited my sister when she was studying in Sweden. Seeing photos of Porto makes me very excited, because it looks so beautiful, and I can't wait for being in the city."

Characteristics: "I'm a very serious person on the field, whether playing or training, but at the same time, I like to contribute to a good environment and have fun. As goals, I have, at a collective level, revalidate the championship won in the last season and, on an individual level, as this is my first season as a professional abroad, to learn a lot. I'm looking forward to being in Portugal to absorb everything."

FC Porto: "I know that FC Porto is a great club, with many sports, which is very good. I'm excited to meet my teammates and the rest of the club, I don't know anyone in particular, but I know there are excellent players and I'm looking forward to being with them. I really want to meet the fans, represent the club in the best possible way and have a great season.
Last edited: Jul 16, 2021
Reactions: Cyclone27inQC

Pretty cool that Cande is the only active college player in Tokyo. Looking forward to a great year from her in Ames!

Cande at the Olympics