AMES — For several seconds, Mitchell Harger and his Iowa State teammates basked in the moment.

The redshirt senior walk-on had scored his first career touchdown — until an untimely flag for an illegal shift nixed the bucket-list moment.

“I probably had a few expletives going on in my head,” said Harger, who’s part of a group of senior walk-ons (and former walk-ons) who’ve made a big difference in Cyclones coach Matt Campbell’s first season in Ames. “And I’ll keep it ‘PG,’ but at first you’re devastated. You wait five years and then all of a sudden it’s just called back…. It wasn’t easy.”

But Harger — who hopes to help ISU (2-8, 1-6) to a second straight win when Texas Tech (4-6, 2-5) comes calling Saturday at 2:30 p.m. — knows that nothing happens for a walk-on without the requisite blood, sweat and tears-laced backdrop.

One play later in last week’s eventual 31-24 win at Kansas, offensive coordinator Tom Manning dialed up Harger’s number again. This time on third and goal from the Jayhawks’ six-yard line.

“I’ll be honest with you: I didn’t know Mitch (had) never scored a touchdown,” Manning said. “And after the game I went up and talked to him and I realized pretty fast that that was the first one and he was so pumped up. It was pretty neat. That was a good moment obviously for him, an incredible moment.”

One that almost didn’t happen. Originally, Manning had chosen a pass play. Fate intervened and the play call was changed.

“It almost seems like a higher power came into play because the next play, third and six, you’re thinking pass and they called a pass, and I was like, ‘OK, you’ve still got to do your job. You’ve still got to block,’” said Harger, who starred at Alburnett before becoming a Cyclone. “All of a sudden they waved it off and I looked over to the sideline and it was a run called. I was like, ‘Huh? All right.’”

Then, the fireworks. The feels. That tingling sensation set in for Harger and the rest of the rebuilding team that surrounded him.

“It’s like third and six, and I’m just like, I don’t know what they’re going to do,” said Harger’s roommate and fellow walk-on, Josh Jahlas, who’s seen his playing time increase in year one under Campbell, too. “I thought they were going to pass it and they handed the ball off and chills went down my whole body. I was so excited just for him. A great experience.”

Campbell called senior walk-ons and former walk-ons such as Harger, Jahlas (a linebacker), and offensive linemen Nick Fett and Brian Seda “the foundation” of the program’s culture change.

They simply work hard. They rarely attract acclaim. They don’t often score touchdowns, but their examples from the weight room to the practice and game fields shine like a beacon throughout.

“They’ve been the rock as this culture has started to really change,” said Campbell, whose team seeks to win two straight games for the first time since the 2013 season. “It says a lot about them and you hope by the time you’re a senior, your seniors understand what the values of your football program look like. Attitude and effort, commitment, those things, and they teach that to the juniors and the sophomores and the freshmen. I was fortunate to play in that kind of program and fortunate, I think, at Toledo where we were really creating that kind of program where the kids were teaching the young guys in the program, ‘This is what the expectation is.’ When it’s always the coach doing it, that’s hard. I need to tell you, they tune the coaches out, too — 18-to-22-year-old young men, but when it’s coming from your players, man, that’s really special.”

Harger could have left the program after graduating. He’d put in his time. He’d earned a degree that yielded an enticing job offer. Instead, he came back. He wanted to be a part of this new beginning.

“I guarantee you that he’s happy he did,” Fett said.

Rewards don’t always come wrapped with glossy win-loss records. Take Fett, an Audubon native, who started against Oklahoma State last season and played well. He thought that performance would lead to more playing time, but it didn’t materialize. Heading into his senior season, he remained a walk-on and faced new unknowns — until Campbell arrived.

“I don’t know why that didn’t happen with the old staff or whatever,” Fett said. “I thought that was all she wrote. This new staff came in and coach Lou (Ayeni) and (former assistant strength coach, Erich Anthony), they both threw in some very good things to say about me and basically off that game and off of practice, they gave me a scholarship for that. Coach Campbell hadn’t known me and Tom — coach Manning — hadn’t known me at all either. So I think that laid the groundwork for me. They looked at me as a guy who could come in and lead the group and be a good player.” 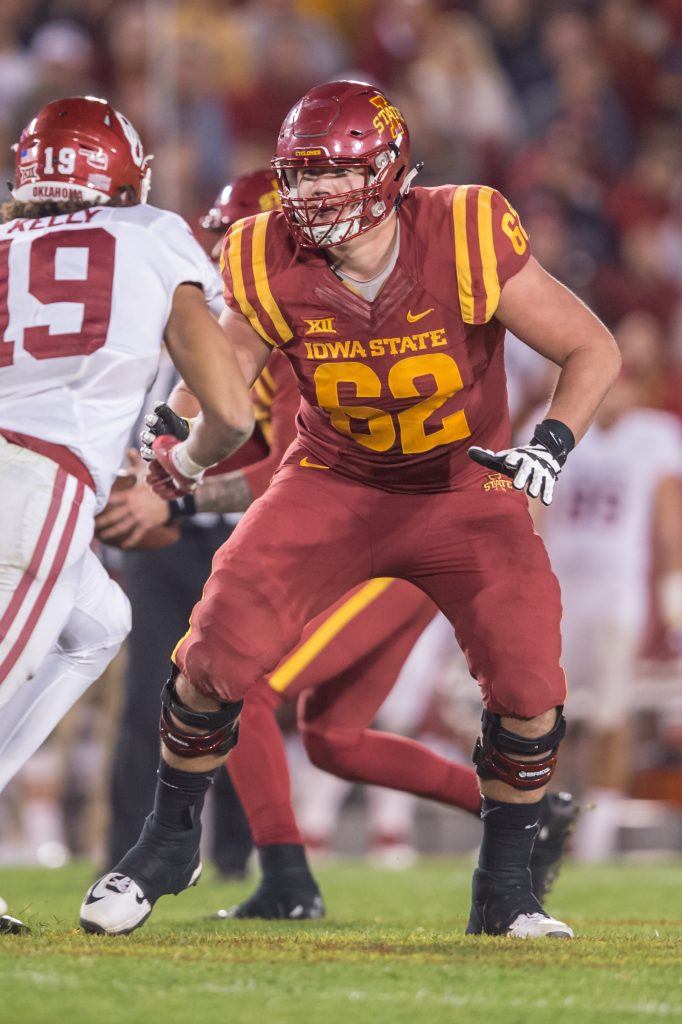 Fett has done that. All he needed was a chance.

“Obviously you come in as a walk-on and you’re not getting paid or anything,” he said. “You come in and you want to start and you want to earn a scholarship, that’s the two goals that you have — at least that I had and I think most of the guys here have. And to finally get that, it was surreal, it was really cool.”

Jahlas, a former Cedar Rapids Kennedy standout, established himself as a hard-hitting special teams star in his redshirt sophomore season. He recovered two fumbles while covering kicks and punts, but couldn’t find a route to the field as a proper defender — until Campbell arrived.

In the season opener against Northern Iowa, Jahlas finally played some snaps at linebacker. He’s continued to see the field since. It’s all he ever wanted — and reminds him of what he, Harger, and Fett talked about when they all tried out for walk-on spots five years ago.

“I kind of remember thinking, just dreaming of the day, we were like, ‘Maybe we’re going to be the guys out there some day,’” said Jahlas, who has three tackles for loss and a forced fumble this season. “It’s a dream come true, really.”

It’s more than that. It’s an example of what determination and grit can overcome. Once overlooked and now looked up to, ISU’s senior walk-ons have come full circle.

“You never know what a kid is capable of doing until they have the opportunity to do it,” Manning said. “And recruiting’s not an exact science and a lot of times you make mistakes and you miss guys. Especially at Iowa State where there is a greater passion for Iowa State and there is a great passion across the state that kids want to come here and play football. I think it’s foolish to not give people the opportunity to do so because you never quite really know. Thats one thing that has really helped us this year.”

Harger may or may not score another touchdown. He may or may not even carry the ball again. But what he did last Saturday — and for the past five years — will endure well after he’s gone. So will the work of Fett and Seda, who carved out his path to paydirt. So will the tenacity of Jahlas, who felt the chills when Harger powered into the end zone.

“To finally get something sustainable, to finally get something tangible to all the hard work means everything,” Harger said. “I mean, for the past four years it’s been these little moral victories or something like that. Three years ago it was, ‘Oh, I finally touched the field. Oh I finally got a carry at the end of the game.’ Now its finally, ‘I’m contributing to something that is working towards competition and actually working towards winning games.’ And seeing guys like Spencer Benton or Josh Jahlas, Fett, Seda, you name it — everyone. There is no difference, really, between scholarship and walk-on anymore. Everyone’s just working towards everything.”

That’s a culture change. No cliques. No long-standing laurels. You earn what you get, every practice, every game, every offseason.

“That WOPA (Walk-On Players’ Association) group so to speak is definitely the foundation of our program right now just because of the time and hours they put in here the past five years, they’ve been through a lot of things,” said star receiver Allen Lazard, whose brother, Anthony, is also a WOPA member. “They’ve had a lot of different coaching changes, positive and negative. So just to see them go through the things that they’ve gone through and still be able to come to practice every day and work their butts off is unbelievable.”

Last Saturday, that translated into Harger scoring a touchdown not once, but twice. That’s bleeping something — and he most certainly didn’t celebrate alone.

“You could look at the highlight film or look at that play and you could hear all of us on TV just yelling,” Fett said. “And it’s not just the walk-ons. All the scholarship players see how hard that he works and stuff and how good of a guy he is, so to have him score, that wasn’t just a walk-on deal. That was everybody. You should have heard the locker room after the win. (Coach Campbell) brought up, ‘How about Mitchell Harger?’” And the whole locker room just lit up.”