There were a lot of abnormalities with the Cyclone offense this past Saturday in their 45-42 loss to Baylor. As the possessions mounted, so did the successful drives ending in touchdown after touchdown, which quite honestly is extremely rare for Iowa State offenses in recent and not so recent memory.

Those are all good questions and all good signs for the improvement of the Iowa State offense, especially when compared to the abysmal performances in the first two weeks against UNI and Iowa.

I tweeted this earlier in the week, but when Iowa State topped 40 points against Baylor that became the 15th instance in Cyclone football history where they scored at least 40 points in two consecutive games (note that three of those instances were a part of three game streaks). It hadn’t been done since 2008 and it is just the fifth time it has happened since 1976.

Below is the complete list of game streaks where Iowa State scored 40 or more: 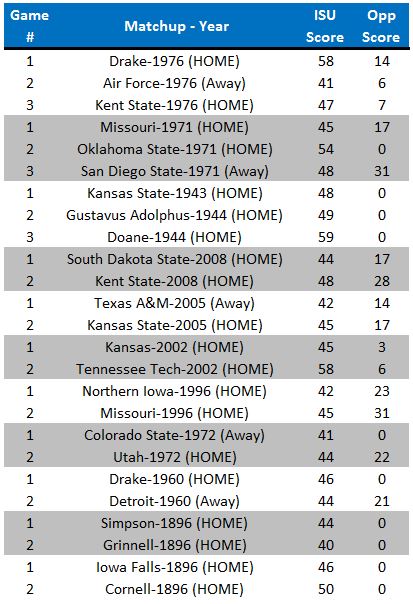 Those huge scoring outputs against Gustavus Adolphus and Doane are especially impressive!

So what about the efficiency we witnessed?

Six straight possessions, six touchdowns (eliminating the last possession of the first half where they sat on the ball to run out the clock); has that ever happened before?

Well, I can’t say for certain but I can say that it hasn’t happened since 2005 (as far back as my data can take me). Below is the list of games from 2005 to current day where Iowa State scored touchdowns on three or more consecutive possessions, just 13 times.

But first, a couple of notes about the data compilation. I wrote logic to remove any drives that likely started in a situation that would’ve had the offense kneeling the ball out like we saw in the one possession Saturday. Those were defined as starting inside the 30 yard line with less than 90 seconds on the clock in the 2nd or 4th quarter.

Also, any touchdowns scored via special teams or defensive returns are mixed in with the offensive touchdowns. For this it would have been better to remove them, but that task was way too large for the overall small impact of leaving them in.

Lastly, this is not the first however many possessions in the game, but instead any streak of possessions within the same game—but also not from one game to the next! 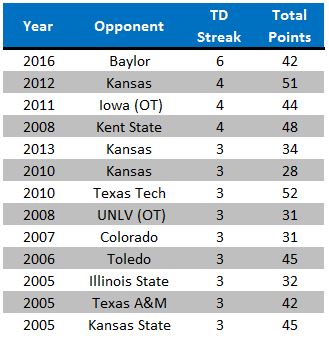 As you can see, the performance versus Baylor is at the top of the list. From 2005 to today there have been three games with four consecutive touchdown drives; the streak against Iowa in 2011 where three of the four touchdowns occurred in overtime.

As an attempt to guess on the odds of if this could have possibly occurred prior to my data’s starting point, I looked at how often Iowa State has scored enough points to equate to a six possession streak of touchdowns in the history of the program.

To analyze that, I created a table to show the percentage of games in the history of the program prior to 2005 where Iowa State scored at least 36 points to 42 or more points. I couldn’t just get total team touchdowns to know the exact number of touchdowns scored, so it had to be done this way (also had to account for a bit of a history of missed extra points…)

Of the 1,051 games played in the given time frame, ISU scored 36 or more points in 116 games, or 11 percent. As the list goes down with the point totals going up, the percentages obviously decline. All the way to 6.7 percent of games at 42 or more points. All of this to say, Iowa State has potentially done this before but the odds aren’t too high. It would only be mathematically possible in up to 11 percent of those 1,051 games but realistically that percentage is much lower.

Especially if you consider the competition instead of those great teams from Simpson, Grinnell, Iowa Falls, and Cornell back in 1896.

While I was at it I became mildly curious about one more thing. How often does Iowa State score a touchdown on their opening drive of the game? Further, has that led to more wins (in simplest form without accounting for the strength of the opponent)?

Below shows the number of games where Iowa State opened with a touchdown on their first possession compared to the total number of games in the season as well as how many of those games resulted in wins. 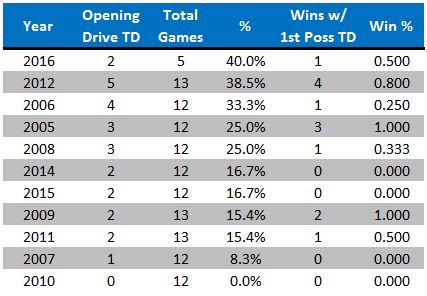 Looking at the numbers, I don’t think there is much profound information here, especially when you consider how intermingled the good seasons and bad seasons are. But, it is interesting as a reference point for how often the Cyclones have started games off on the right foot, with a touchdown.