Texas Tech’s interim president John Opperman said it best on Friday: “The rumors of our demise are greatly exaggerated.”

The current headlines stemming from the league’s annual spring meetings in Dallas are refreshing: For once, the Big 12 appears to have had a good day.

The headline-grabbing news was that a conference championship game would return in 2017 but that wasn’t the most significant. I’ll explain why and more with these five thoughts on the spring meetings and the future of the league.

The best news of all…

Money talks. Because of that, I’m of the belief that as long as the Big 12 is financially sound, it will also be stable.

Before Friday, estimates had Big 12 schools making $23 million per year.

The league is projecting that the return of the Big 12 title game will be worth approximately $30 million per year, so that’s another $3 million per school.

The Big 12 is never going to surpass the Big Ten or SEC in revenue but being in the same ballpark as them is not only surprising, but impressive. 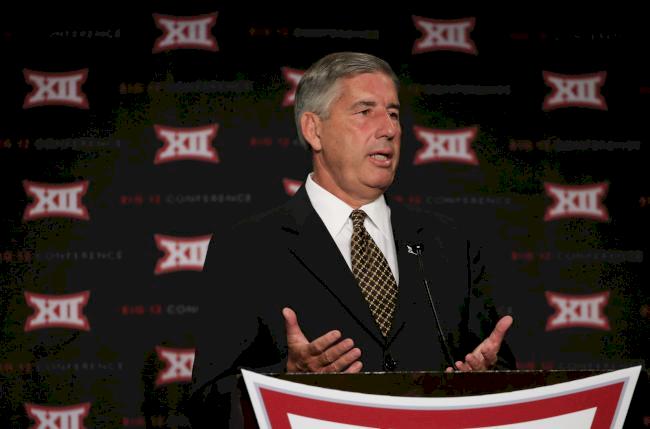 As far as divisions go…

If (a big if) the Big 12 stays with a 10 team, round-robin format, how will it determine who plays in its championship game?

I don’t understand this talk about splitting the Big 12 up into divisions.

Why not just match the top two teams in the league up for an epic rematch at the end of the year?

Take advantage of the recent deregulation ruling and don’t even have divisions.

I have to give my friend Travis Hines (from the Ames Tribune) full credit here. When Big 12 expansion talk fired up a few months ago in Phoenix, he (on my radio show) was the first person I heard go all in on the Big 12 forgetting about television and going all-in on some sort of digital network.

It’s hard telling exactly what is being discussed behind closed doors, but administrators made it very clear on Friday that because of the tumultuous state of the medium, a league television network is no longer in the cards, and that’s ok.

Why that’s a good thing for future expansion…

…Because it keeps Texas happy and doesn’t touch their precious Longhorn Network (that’s worth $15 million a year to Texas from ESPN).

If a third-tier television network is no longer in play, then television market sizes shouldn’t be as important in future expansion. Football brands will trump that.

And then there’s this…

Earlier this week, Dennis Dodd from CBSSports.com reported that if the Big 12 grows to 14 teams, it could be worth an extra BILLION dollars from ESPN and FOX.

What kind of sane organization turns down a billion dollars?

On Friday, Dodd (who has been all over this story) added this nugget, which I found fascinating.

Everybody said all of the right things, and that hasn’t always been the case within the Big 12.

Oklahoma president David Boren says that expansion is still on the table and for now, the waters have settled.

Money is being made, and so is progress.

I’d call it a successful week for the Big 12.