It didn’t take long for Matt Campbell and his staff to get busy with scholarship offers after their satellite camp in Addison, Texas, earlier this week.

Shortly after camp ended, three recruits in the class of 2018 tweeted out that they had received offers from the Cyclones — including Cedar Hill, Texas, running back Joshua Fleeks. 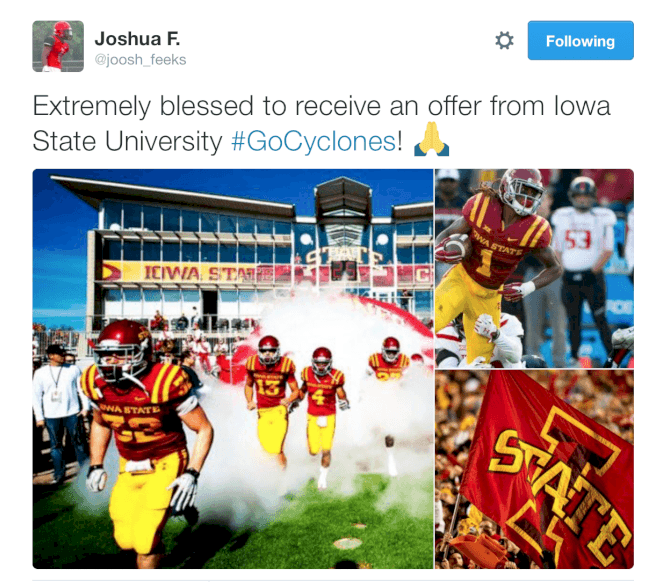 Just this week, the 6-foot, 165-pound, back has earned offers from Iowa State, Houston, Illinois and SMU. Texas A&M and TCU have reportedly started showing some interest as well after strong showing at camps their staffs attended.

“It was a great experience and it was fun,” Fleeks said about the camp jointly hosted by Iowa State and Michigan.

The 2018 prospect is likely to see his stock continue to rise as he goes into his junior season and beyond. Last year, he ran for 135 yards on 30 carries as a sophomore for one of Texas’ biggest powerhouse programs.

He turned some heads when he ran a 4.48 40-yard dash at The Opening-Dallas during the spring.

His performance at the camp, especially in a drill he called the “rabbit drill,” was enough for ISU quarterbacks coach Jim Hofher to offer him a scholarship.

“He was just telling me about the school and he wants me to come out really soon,” Fleeks said. “He said that the program is great on grades and the football team is more family than team.”

He hopes to make a visit to Ames soon, but doesn’t have any sort of timetable set.

Being in the class of 2018, contact between Fleeks and the coaches will be limited until later this fall. They can only communicate on visits, at camps and on calls made to the coaches by the recruit.

You can see his highlight film from spring football right here.