1 – Since I learned how to read, I have been a passionate college football preseason magazine guy. I might run a website for a living, but I still get the newspaper delivered to my door every day and Sports Illustrated in my mailbox on Thursdays.

Perhaps that is still why I like these magazines that provide college football junkies something to chew on during a brutally long offseason. They create conversation. A well-informed fan is the best type of fan. Study up, Fanatics.

Yesterday, I picked up Athlon’s annual Big 12 preview edition. For the sake of transparency, I write the Iowa State content for Athlon so I am very biased here when I write that Athlon produces the most thorough preseason magazine on newsstands every year (besides Phil Steele, but that isn’t really comparable as the publications are totally different). This has nothing to do with me, but I know the ins and outs as to how the publication is produced. These guys really do their homework.

Today in Musings, I am going to go through and analyze much of Athlon’s analysis of the Cyclones and Big 12. 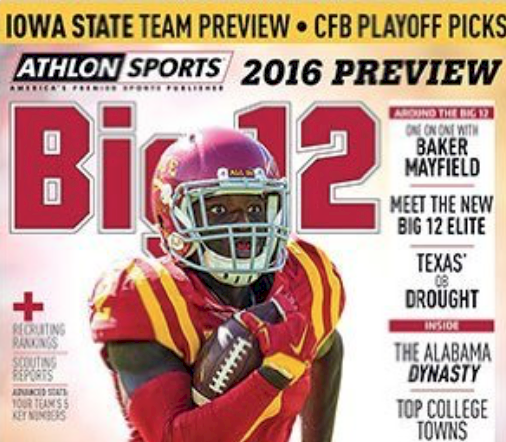 “Exceeding last season’s three wins should be a reasonable expectation,” it reads.

I have yet to see an actual line on Iowa State’s O/U for wins in Vegas, but my guess is that it will end up at 4 or 4.5.

My very early feeling on this team: It is very similar, but better (and more experienced) than last year’s group that lost a handful of close games in heartbreaking fashion. Really, the only position group to lose much was on the offensive line (and it’s not like the big men up front were very impressive in 2015).

Maybe it’s Kool-Aid. I know it is wishful thinking. But I do think that Iowa State’s final record will be in the 4-6 win range in 2016. The schedule lightens up a bit too (San Jose State at home instead of at Toledo is a plus).

I’m a believer that things have a way of evening out over time. Iowa State has had SO MUCH bad luck over the last three seasons (much of the reason for that, of course, is that the team simply wasn’t very good).

My very early guess is that Iowa State goes 5-7 in year one under Matt Campbell.

3 – When you read Iowa State’s depth chart in this year’s Athlon Big 12 preview, be gentle in your criticism of it and understand how big of a bitch (pardon the language) it was to come up with.

Filing out that two-deep was one of the most grueling things I have been asked to do in my professional career. New staff. New schemes. Campbell’s staff moved guys around all spring and has yet to release any sort of a two-deep to anybody. It was difficult but hey, I tried.

4 – Athlon is picking Texas to go 6-6 and finish seventh in the Big 12 this year. If that indeed happens, Charlie Strong absolutely has to be shown the door, which sucks because deep down I believe that he is a really good coach.

I just get annoyed with all of this Big 12 expansion/instability talk that is out there when I think about Texas’ role in it.

Things would be a lot rosier around the league offices if Texas would just do something in the sport football other than underachieve. In my opinion, there is no greater reason for this so-called “psychological disadvantage” that the league is facing than Texas’ mediocrity (and that’s being nice).

You still a big dog, Texas? I know that your big brother, Oklahoma is. It’s time for you to step up and prove it. 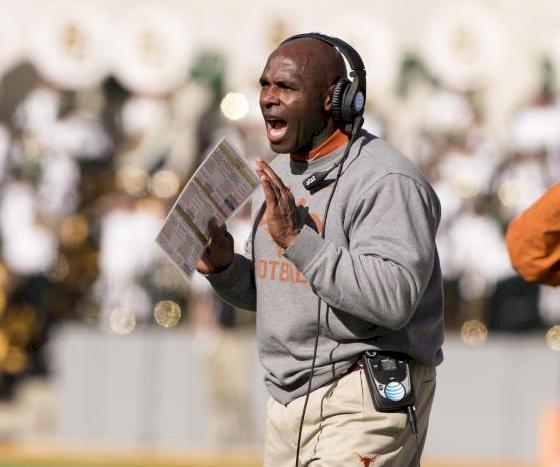 5 – Thanks to Mike Warren, Iowa State has the 4th-ranked group of running backs in the Big 12 this preseason. As noted in point one, I am a preseason magazine nut. Every year, I buy all of them and attempt to read every word. I don’t remember Iowa State ever being ranked that high at any skill position – ever.

After that, Iowa State’s next highest mark is 7th for WR, DL, LB and DB. Iowa State’s quarterbacks are ranked 8th with the offensive line being 9th.

Kansas is ranked 10th in every position group except linebacker (9th). I have to ask: How awful are West Virginia’s linebackers going to be?

6 – This will obviously change as the weeks move along but to me, the most intriguing game on the college football schedule right now is Oklahoma vs. Houston (on a neutral field in Houston) on the opening week of the season.

Houston, who is led by former Iowa State offensive coordinator Tom Herman, has a real opportunity to spoil the Power-5’s College Football Playoff party but it has to defeat the defending Big 12 champs in week one to do so.

Houston also has Louisville scheduled in its non-con. Playing in the American with those two out-of-conference matchups, a 13-0 Houston team should go to the Playoff. 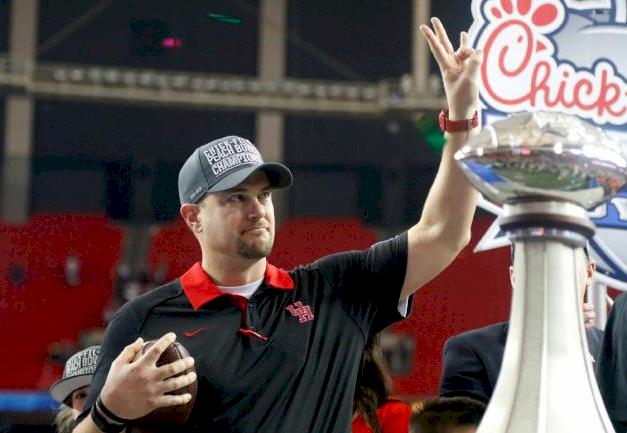 7 – Coming out of the Big Ten spring meetings that were held last week in Chicago, a lot of conversation has been had about the league’s future television package and specifically, who is going to own the second-half of its tier-one rights (opposite of FOX).

The bulk of the talk has been if the Big Ten plans to end its 25-year history with the worldwide leader, ESPN.

My guess is no. The two entities need each other. ESPN can’t claim that it is the “home of college football” without the Big Ten and despite what the pundits say, the Big Ten still needs ESPN’s reach. Every league does.

ESPN is facing its share of struggles right now, but it is still the top dog by a wide margin.

My prediction: Something will get done between the two sides.

8 – A quick content tease for you guys: Starting next week, Rob Gray will be writing Cyclone “Where Are They Now” pieces once a month for the site. For his first installment, Rob will be profiling former Iowa State quarterback/wide receiver and fan favorite from the Dan McCarney years, Austin Flynn.

Expect to see this piece up on the site either this weekend or early next week.

9 – One more content note: if you missed it over the weekend, check out Jared Stansbury’s recruiting podcast. It is short but informative. I am so excited that Jared is now on board full-time. Our football recruiting coverage is about to go through the roof.

10 – Lastly, thank you to all of the participants in the 2016 Cyclone Fanatic Golf outing that went down last Friday at Jester Park. We had a great response, which made me happy. We will definitely do this again next year, where it will be bigger and better.

Here is a shout out to my partner, Adam Gray. He is the reason this tournament happened and was successful. Adam planned everything. I simply showed up on Friday and golfed.