Iowa State picked up its 10th commitment in the class of 2017 on Monday when Lenexa, Kan., three-star defensive end Angel Dominguez tweeted his commitment to Iowa State. All 10 of the Cyclones’ commits are three-stars and they should be in position to rise from No. 27 in the 247 class rankings once they are updated.

"The first time I visited I thought to myelf that I could see myself being there," Dominguez told CF in a text on Monday after making his decision. "Then just over time I fell in love with the university." 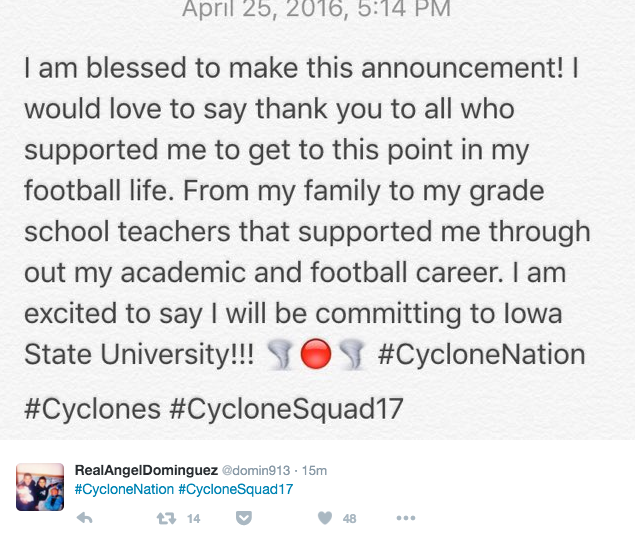 The 6-foot-3-inch, 250-pound, prospect chose the Cyclones over offers from Kansas, Northern Illinois and Oklahoma State. He was a first team all-state selection last fall as a junior in class 5A.

He racked up 79 tackles, 17.5 for a loss and 11 sacks, last season and has already been on two visits to Ames since the new year.

"This morning Coach (Eli) Rasheed watched me work out then I called my Dad and told him about it," Dominguez said. "I just said, ‘I want to commit. That’s where I want to be.’"

On film, he looks to have a quick first step and is adept at getting around the edge while rushing the quarterback. He’s a big kid and appears to be pretty heavy hitter.

He will take part in Nike’s The Opening this weekend at the New York Jets’ facility in New Jersey. He’ll also attend the Rivals camps in Kansas City the next two weekends and plans to camp at Iowa State during the summer.