Richard Bowens III thought he could be watching his future team when he walked into the Glass Bowl in Toledo on Sept. 20, 2015. The three-star cornerback was in town to watch Matt Campbell’s Toledo Rockets take on Iowa State. 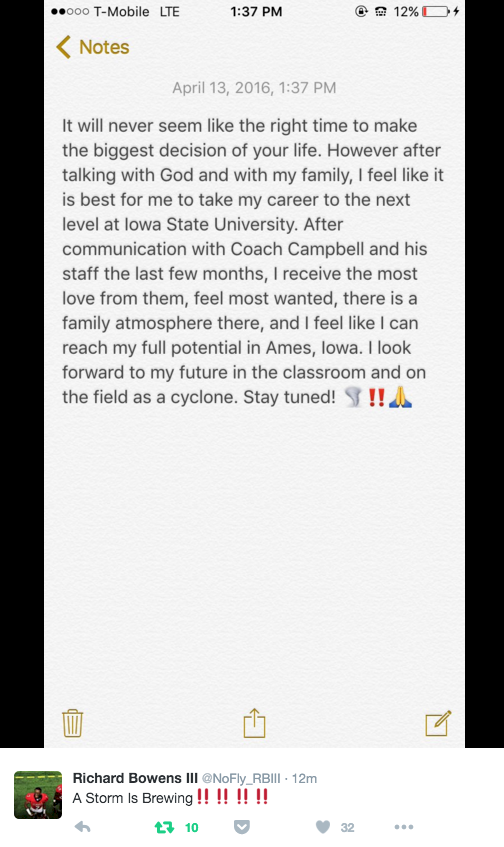 “No, not at all,” Bowens said when asked if Iowa State was on his radar that night when the Cyclones lost in double overtime. “At the time I was there as a Toledo fan.”

He was very familiar with the Rockets and their energetic coaching staff. They had offered and started recruiting him before his junior season where Bowens and his Orchard Lake St. Mary’s team won the Michigan Division II state championship.

The 6-foot, 175 pound prospect knew Iowa State would likely be on the rise after Campbell and his staff moved on to Ames. The staff’s success at Toledo made him confident that they could do the same at Iowa State but it wasn’t even a coach that hammered that home the hardest.

“One day after track practice I go on my phone and I see all these tweets that he’s tweeting me,” Bowens said. “‘C’mon, fans. Get him to come to Iowa State.’ He did one about why it’s on the rise, basically persuading me. I was like, ‘How this dude find me? He working.’ He said the coaches told him about me and that’s how that went.”

Speaking of the track, Bowens might show out there just as much as he does on the football field. He broke the school record and won the state championship in the 300 hurdles as a sophomore. He’s already close to breaking his record after one meet this season and what he describes as “crappy Michigan weather.”

Bowen is using track as another way to get better – another way to make himself bigger, faster and stronger before his senior year of football. He’s accumulated offers from 13 schools including Minnesota, Cincinnati and Syracuse.

He took a break from track season to visit on April 2 and saw everything he needed to see.

“I liked Coach Campbell and his staff, the success they had at Toledo. After going down to my visit I see that they will be able to have success at Iowa State,” Bowens said. “I saw a program on the rise. And, you know, for a DB, what better conference to play in than the pass happy Big 12. Go against the best receivers week in and week out. So I will love to be put on that stage. That’s pretty much why. Also, the family atmosphere they got going on. I felt wanted there and I wanted to be a part."

I wouldn’t be surprised to see that offer number rise for the player Scout has rated as the No. 5 cornerback in the Midwest after his senior season. That doesn’t mean he will be ready to listen.

“I’m glad I got the commitment out of the way because I can focus on becoming a better football player,” Bowens said. “I don’t have to go camping all across the country anymore. I can stay at home, stay in Detroit and just get better.”