When I arrived to the Jack Trice Stadium parking lots at around 11 a.m., I was amazed as to how packed they were. We held our Cyclone Fanatic tailgate party in lot C-6 thinking that it wouldn’t be to crowded and that we would have room to breathe.

Packed, I tell ya.

It was an awesome sight. Just over 15,000 Cyclones showed up for tailgating, the spring game and many took part in the annual Cy’s House of Trivia event later on that evening.

Seeing the hundreds of former players that showed up gave me goose bumps at one point.

To me, this is one of Iowa State’s flagship days every year and with that many people attending the spring game itself combined with the amazing weather, this was one of the best April days in Cyclone history.

2 – Following our tailgate (thanks to the hundreds of you who stopped by), I assumed my spring game position on the sideline of the Gold team (I like to watch spring games from the sidelines as opposed to the press box. You gain perspective that way).

An older Iowa State fan that I adore and have known for a good decade approached me and said, “This is different.”

He didn’t even say hi or give me the usual handshake/man-hug. Just, “This is different.”

Those three words spoke volumes to me.

He went on to explain how this feels – to him – like the Johnny Majors era all over again.

Admittedly, I get a little bit frustrated when people talk about Johnny Majors. I respect the hell out of the man. For our younger readers, in 1971 Majors led the Cyclones to an 8-4 record and a birth in the Sun Bowl. Iowa State lost in the Liberty Bowl the following year before he left for Pittsburgh, where Majors would eventually lead the Panthers to a 12-0 season and national championship in 1976.

The man is a college football legend, but he also didn’t coach Iowa State in the current Big 12 with nine conference games and the southern dominance. It’s a different world now. Again, no disrespect to that era of Cyclone football is meant, it’s just a difficult comparison for me to grasp because things are so different.

But that kind of perspective – the words I received from my friend who was close to the Majors program – you just can’t find very often. When people describe Majors, they talk about a “big time” feel that he brought to Ames. It was a win-at-all-costs culture that had never been seen before and perhaps hasn’t been seen since. (I have no opinion on this. That’s for the older Cyclone fans to hash out.)

That quote stuck with me the entire day.

I have only been around since about 2003 but I must agree, things do feel special to me too.

3 – Let me say this: Obviously Matt Campbell has not coached a game yet. Everything he has done up to now and will continue (that we will see from afar) to do leading up to September is cosmetic. Cool uniforms and being active on Twitter are awesome but if you don’t win, people will soon forget about it.

However, judging what we can judge from the day he got here up until the end of spring ball, I’m not sure what Campbell’s staff could have done to be more impressive.

The stuff we see – the social media and what not – is impressive.

4 – …Has been nothing short of unbelievable.

These guys compiled the highest ranked class in program history in two months.

247 currently ranks Iowa State’s class as the 29th best in all of college football (keep in mind that it is still very early).

When is the last time that Iowa State was even in the conversation for a prospect vs. the likes of Alabama, Tennessee, Ole Miss and Mississippi State?

Right now, when it comes to 4-star safety Kam White, Iowa State is the leader.

I’ll exit the football conversation with this, another quote from another friend who has been close to Iowa State football for a really long time: “If these guys don’t win here, nobody will.” 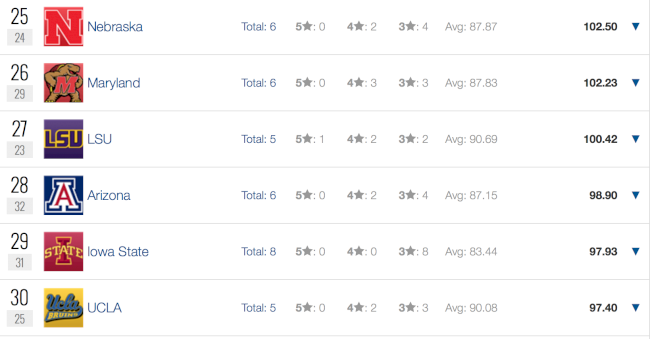 5 – Moving onto the elephant in the room…The reported lawsuit that former women’s basketball player Nikki Moody has filed against Bill Fennelly, Iowa State university and the state of Iowa.

Full disclosure: As I have said (and written) multiple times over the years, I have a very difficult time being objective about anything that has to do with Bill Fennelly. I’ve traveled with his team. I have called his team’s games on the radio. I’ve spent a lot of time with the man.

I believe he is a hard ass and for some kids these days (or any day really), is likely very difficult to play for.

But I don’t believe he is a racist.

Having said that, knowing what I know (which isn’t much), I have no right to call Nikki Moody a liar either – and I won’t.

So I’m going to sit back and let this thing play out before giving much of an opinion on the matter.

Have a great Monday.