DENVER — On Wednesday afternoon, I joined Ross Peterson and Andrew Downs on 1460 KXnO and they asked to give a percentage ranking my confidence in Iowa State’s first round NCAA Tournament game on Thursday (1 p.m. central on TBS) vs. Iona.

First of all, that is an incredibly difficult question to answer (for the record I said 75 to 80 percent) because in the NCAA Tournament, there are just so many variables. As we all learned last year, weird stuff happens. Plus, no matter how much research I’ve done since Sunday (and I’ve done a lot), I hardly consider myself to be an Iona expert.

I will confidently say this though: I have never seen this particular group of Cyclones as focused as it was on Wednesday afternoon at the Pepsi Center, where on the court and in the locker room, I witnessed razor sharp focus from the guys.

Just minutes after watching 12th seeded Little Rock go through quite possibly the loosest shoot around I have ever seen at an NCAA Tournament, Iowa State threw down perhaps the most business like one. No jokes. A few smiles but not many, and I’m totally fine with that.

I mean really, what is there to smile about? It seems like every pundit in the country is picking a school with a hair over 3,000 students to bounce Iowa State in the first round for the second year in a row. That’sembarrassing. If Iowa State learned anything from last year’s trip to Louisville, this team shouldn’t be smiling this weekend in Denver.

All work. Not much play. And no dyed hair this year either (thank God).

“We are a trendy pick to be upset,” Jameel McKay noted. “It’s more like they still think about last year. It’s time to not only prove them wrong but continue to go.”

Much like “Hampton,” “Blazers” is a cuss word in the Williams house.

If Hoiberg is the Cyclone messiah, then Jerod Haase is Lucifer.

Sorry to bring it up, but Iowa State has obsessed with last year’s stinging loss since – well – that long and depressing trip home from Louisville.

During a tumultuous summer, the motivation that was losing as a three-seed kept this group close while #HoibergWatch dominated headlines. 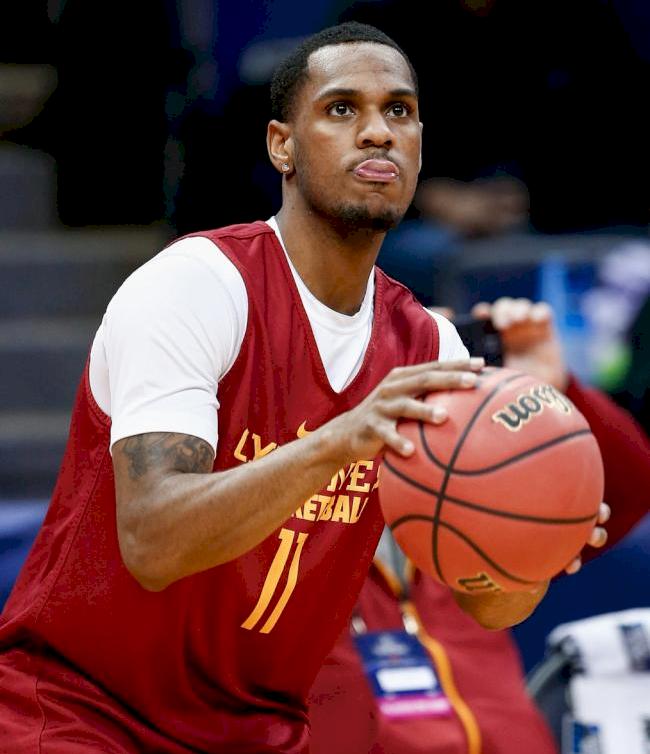 This year seems so different though.

Last time, the Cyclones were the sexiest Final Four pick in the Tournament.

Didn’t Obama have Iowa State going to the show? I know Dan Patrick did.

This year, Iowa State is the trendiest team to be upset.

My gosh, did you see Dan Dakich rip the good guys Sunday night on ESPN?

“You can tell by our focus that everyone is taking it in,” McKay said. “It’s just more motivation. Last year everybody picked us to win. I tend to think we play better when our backs are against the wall.”

There’s an interesting storyline heading into Thursday that I don’t feel has gotten enough attention. Steve Prohm, who has participated in multiple NCAA Tournaments at Murray State (as an assistant and head coach), is in a totally different position this time around.

At Murray State, he was always the underdog. Now, the pressure is on.

“On this end, you are expected to advance,” Prohm said. “Now it’s time to win. Our guys are focused. Our guys are ready. We know we are playing a really good opponent.”

Prohm, unlike his team, seemed loose on Wednesday. He’s excited. After all, coaching this team on this weekend is why he left Murray for Iowa State in the first place.

For the sake of conversation, let’s say that Fred Hoiberg’s basketball philosophy is comparable to Hillary Clinton on the political spectrum. That would make Iona’s Tim Cluess is Bernie Sanders.

I like Iowa State in this game but on the right day (when the Gaels get hot), Iona can beat anybody.

We are all going to miss this guy when he’s gone.

Fans love watching him play. As a journalist, I love listening to this walking quote machine talk.

Niang was asked how many points it will take to win Thursday’s game and his answer was an all-time classic.

“Shoot. You should ask Vegas. I don’t know.”

Niang is 48 points away from tying Barry Stevens on Iowa State’s all-time scoring list. You’d think that if Iowa State gets out of the first weekend, that should be a fairly easy feat to accomplish.