Being that the Cyclones are a 6-seed this week in Kansas City, I can’t kill that argument. However given the circumstances, it could have been a lot worse.

On this eve of the 2016 Big 12 Tournament, I challenge you to imagine how Steve Prohm’s first season could have gone had Matt Thomas not made the drastic improvement that we have seen from his sophomore to junior season.

When Naz Mitrou-Long elected to opt for a medical redshirt late in non-conference play, Thomas emerging was a key to the season and with that, the Wisconsin native has responded like a champ.

“Matt said he would step up,” point guard Monte Morris recalls from a tumultuous time in December. “That’s easy for a guy to say but he’s actually doing it. I take my hat off to him.”

The tasty cherries on top: Thomas has surprisingly molded himself a niche as Iowa State’s best perimeter defender and his 3-point percentage has improved 10 percent (43 percent compared to 33 percent).

That will be a major storyline on Thursday night (8 p.m. on ESPNU) when No. 6 Oklahoma’s (23-6,12-6) Wooden Award candidate Buddy Hield laces up his sneakers with hopes of ruining Iowa State’s attempt at a Big 12 Tournament championship 3-peat.

“Buddy’s so good,” Thomas said of his Big 12 rival. “He can score in so many ways, a variety of ways. You just kind of have to limit his touches and make everything tough on him and do our best to contain him. I don’t think there’s any secret to trying to stop him, you’ve just got to make it tough.”

Hield, the two-time defending Big 12 Player of the Year, is averaging 25.1 points per game this season while shooting an incredible 47 percent from 3-point range. 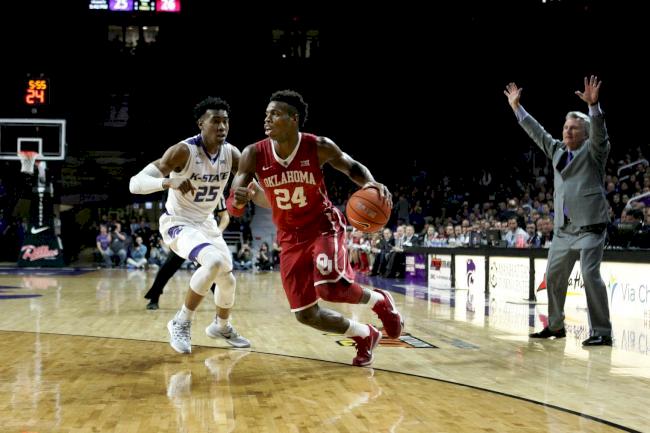 Thomas though has been widely recognized for the defense he played on Hield during Iowa State’s two regular season meetings with the Sooners. It took Hield 23 shots to score 22 points in an 87-83 Sooner victory on Jan. 2. On Jan. 18, Hield scored 27 on 23 attempts but made seven threes – most of which were contested – in doing so. In both games, Hield ‘got his’ (he normally does) but it wasn’t easy.

“He still had 27 points, so I don’t want to take too much credit for that,” a humble Thomas said. “I think I did a decent job of trying to make things tough on him. I’ve just got to do the same thing tomorrow. Same effort. You’ve just got to make him take tough shots and hopefully he misses.”

Since the day he stepped on campus, the issue with Thomas was never talent, only confidence. That’s what Fred Hoiberg told us at least.

These days, the message coming out of Iowa State’s locker room could not be more opposite: Thomas has confidence, heck, let’s call it swagger. He has even surpassed the preseason expectations of his new coach, Steve Prohm, who recalled a summer conversation with assistant coach T.J. Otzelberger, the man who originally recruited Thomas to Iowa State.

“He isn’t just a jump shooter anymore,” Prohm said. “He can shoot, which is great, but he can put the ball on the floor a little bit and he’s become a really good defender for us on guys on a guy like Buddy. He’s tough. He’s strong and he’s grown up a bunch.”

Prohm went as far as to compare Thomas’ work ethic to the great Georges Niang, which is more of an accolade than a casual fan likely realizes.

“His work ethic is terrific,” Prohm said. “He works all of the time, before and after practice, in the summer. He does drills that nobody else wants to do if it is footwork or sprints.”

Three summers ago, Thomas arrived at Iowa State as a highly touted prep shooter and when the shots didn’t fall early in his career, the rest of his game suffered. The game was moving faster than his mind could compute.

“His confidence is at an all-time high right now, Morris said. “He’s shooting the ball, playing good defense and rebounding actually. I feel like his focus going into these games is phenomenal and it’s paying off for him.”

More proof that Thomas just keeps getting better: His scoring average is 12.1 points per game during Big 12 play – that’s up two points from the less competitive non-conference schedule, which is rare.

Think whatever you want about how the season has played out, but after the Mitrou-Long injury, there’s no way Iowa State would be in good of a spot as it is today without the emergence No. 21.

Finally, the real Matt Thomas has stood up.

Every loss this year was to a Tournament team

I’ve been working on an “insider” column for you guys (should be posted tomorrow) regarding the 2016-17 basketball schedule an it got me thinking long and hard about this season’s non-conference slate.

Turns out, it was a lot better than anybody could have predicted in October.

— Every one of Iowa State’s 10 losses this season has come to a team that will be playing in next week’s NCAA Tournament (thanks to UNI winning the MVC Tournament on Sunday).

*     The season opening 68-62 triumph over Colorado in Sioux Falls. The Buffaloes went 22-10 this season, won their first game in the Pac-12 Tournament (75-67 over Washington State) on Wednesday and is safely in the tournament according to the experts (ESPN’s Joe Lunardi has them as an 8-seed).

*     Then there is Chattanooga, the Southern Conference champs who Iowa State handled 83-63 in Hilton Coliseum on Nov. 23. Lunardi currently has them as a 13-seed.

— Overall, KenPom.com ranks Iowa State’s strength of schedule as the ninth toughest in the country.