DENVER — I finally figured it out.

You want to know the biggest difference between the Iowa State basketball team that topped Iona 94-81 on Thursday in the NCAA Tournament and the one that got bounced in the first round last year?

Let’s start with Matt Thomas (14 points and six rebounds in 40 minutes), who has always been a stand up kid, but now is consistent in everything that he does. On the floor and in the locker room, Matt Thomas is a leader. The last two years, as much as I like him, I couldn’t have written that about the guy.

How about Abdel Nader?

Since October, he has has been praised by head coach Steve Prohm for consistency. Trust me when I tell you that is a word that Fred Hoiberg’s staff never once used to describe “Dooley.” 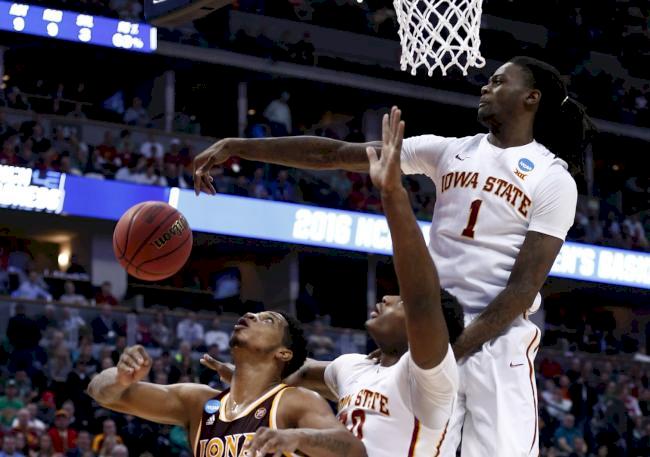 In the locker room, I asked Monte Morris what he had to say to the “experts” across the country who slobbered all over Iona heading into this game.

“We don’t really want to do anymore talking,” Morris, who scored 20 points with eight assists said. “We just smile and wait and see. From here on out, we are going to play with a chip on our shoulder because we know everyone is going to doubt us.”

Such a mature answer. He could have taken a shot or two there. Could have gloated. Every pundit and his dog picked Iona to win this game (it seemed like that at least). Nope. Just move on. That’s what Monte did.

Being around the team, let me tell you guys that there is a much different tone this time around. Iowa State’s locker room isn’t loose, but I wouldn’t call it tight either. It’s confident.

“We have been anxious for this,” and assertive Jameel McKay said. “We have been waiting on this moment. Our focus was unbelievable. I expect to keep going with that focused and for us to be even more focused in the next round. There’s no time for setbacks right now.”

McKay is another great example of the development of this team’s mental state. A month ago, his mind was in the clouds. His teammates couldn’t count on him. Now, dare I say that Jameel McKay has established himself as a leader? Against Iona, he was one rebound shy of recording his fourth double-double in five games.

In the past, the word cocky might have been fair when describing the Cyclones. Now, it’s confidence and the Cyclones know they have a golden opportunity in front of them to accomplish special things.

“You’ve got to run with it. You’ve got to make it happen,” Georges Niang said after his 28-point performance. “Look at UConn a couple of years ago. They were a seven-seed and they made a run like that. You have to get into the tournament and then it’s about who is hot. It’s a one game season. Nobody is counting your record anymore.”

Up next is a date (Saturday at a time to be determined) with another lower seeded mid-major. Little Rock, champions of the Sun Belt, upset Purdue 85-83 in double-overtime.

Steve Prohm’s motto when he took over this program was to “win the day.”

That is exactly what this group of Cyclones did this year in the Round of 64. It doesn’t matter what seed the next opponent is or what conference they play in. I anticipate that the Cyclones will do the same on Saturday.

Because you know, that’s what grown ups do.