When it comes to Iowa State football, I have a bit of a history of being a bit of a hopeless romantic. By nature, I am a glass half-full guy.

When Gene Chizik was hired in November of 2006, I was a ripe 21 year-old aspiring journalist who truly believed that this defensive coordinator from Texas would eventually lead Iowa State to a national championship.

He told me that was his goal, so why wouldn’t I believe it? Why would Gene Chizik of all people hyperbolically pander to this hungry fan base?

My expectations dropped in 2009 when Paul Rhoads got the job. Then a 24-year-old sportscaster in Shenandoah, Iowa, I dumbed down my expectations. Simply, an outright Big 12 championship and BCS bowl game would do.

Now I am 31 with an amazing wife and beautiful one-year old daughter. I am admittedly still green, but have also developed a callous over the years. I won’t buy a hot dog from just any vendor on the street, if you know what I mean.

When Matt Campbell was hired in December, I made a vow to my optimistic self that I wouldn’t get too fired up this time.

When others called it a “home run hire,” I refused go there. How the heck do I know how this hire is going to look five years from now? I have no clue. No way. Not again. I wasn’t going to go there.

Okay. So here we are in the middle of spring football. Matt Campbell has yet to coach a game in God’s country but I must say, this man has not done a single thing that I do not love.

“These guys came in here expecting to win eight or nine games next year,” one person close to the program told me.

Daddy likes the sounds of that.

But let’s be real: Chances are, Iowa State probably won’t win eight or nine games next season. However, what’s not to love about that brashness?

Recruiting has been red hot under the Campbell staff. In two months, the man put together the best class in Iowa State history (literally).

Campbell added to his impressive off-the-field accomplishments last week while scratching me right where I itch.

On June 13 in Addison, Texas, Campbell will team up with Jim Harbaugh (If you listen to my daily radio show on 1460 KXnO, you know how much I adore Michigan’s head coach.) to host a satellite camp featuring the two programs and their coaches.

“My belief in this is always, where can we get the most value, the most bang for our buck? And I think obviously being able to link up with Michigan down there I think maybe gives us the most value rather than just Iowa State going down there,” Campbell said on Tuesday. “Obviously, this is such a touchy subject and it’s fluid until the NCAA goes to vote on all these issues, but I think the reality is it’s great for kids and it would be a shame if this goes away.” 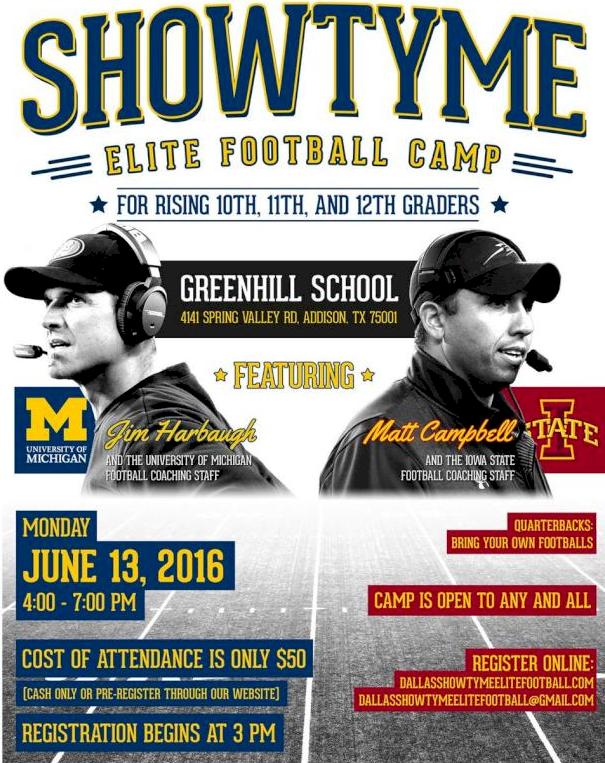 If you’re wondering why Iowa State should team up with anybody, here’s why.

Because unlike Iowa State, Michigan football is a national brand (sorry but it’s true). Every year, Michigan turns down dozens of kids that Iowa State would take – solid players who end up at other Power 5 schools.

I don’t know about you guys, but I will take Jim Harbaugh’s leftovers every day of the stinking week.

Plus, the camp is located in the recruiting rich state of Texas.

“I think we’re going to continue to find unique ways for us to get to certain areas that are maybe outside our own radius, and how can we get the most value for us and our football program,” Campbell said.

You can’t consistently win at Iowa State by doing things just like everybody else.

In basketball, you have to take some transfers and occasionally hit the jackpot with a JUCO or two (check out the Floyd, Eustachy and Hoiberg eras for your examples).

In football, when others zig, you have to zag. Heck, even Michigan has to do this now. Every college football program located in the northern Midwest is at a geographical disadvantage to the SEC, much of the ACC and the southern Big 12. There are more players in the south. That’s a fact.

In a college football landscape where official visits don’t mean that much anymore (look at the number of prospects who commit on unofficial visits in the summer these days), you have to find a way to connect with those guys before the season begins – the guys who can’t afford to make it to Ames for camp.

Iowa State hasn’t had a first round pick in the NFL Draft since George Amundson in 1973.

It’s also a reason why this program has never been able to get over the hump. Iowa State hasn’t gotten enough quality, Big 12 level talent.

This is Iowa State using a gray area to recruit, recruit, and recruit some more.

Got any other rules that this program can stretch going forward, NCAA? Bring em’ on.