AMES — Mitchell Meyers tried to close his eyes, but slumber evaded him. Too much to think about. Too much to process.

Iowa State’s inspirational defensive lineman returned to Ames yesterday — having faced more than a year of wide-ranging treatments for Hodgkin’s lymphoma. He’s smiling (though a little sleep-deprived) now, secure in the knowledge that this constitutes yet another new beginning.

“This was always a big milestone for me, coming back,” Meyers said after attending the Cyclones’ fourth spring practice Tuesday morning. “When I was in Houston, I just thought about coming back every day. I knew once I got back to Ames I’d be on the other side of it. Now that I’m back I can feel like I’m finally better and hit the ground running and start working out again.” 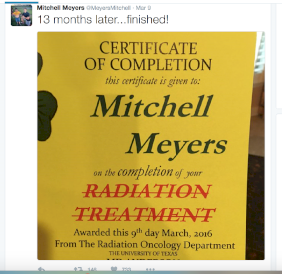 Slow and steady applies to this race back to the gridiron. Meyers, who plans to re-enroll at ISU this summer, underwent rounds of chemotherapy, radiation treatment, and a stem cell transplant during his bout with cancer.

Along the way, former head coach Paul Rhoads and his staff offered vigorous support. New coach Matt Campbell and his assistant have picked up where Rhoads and Co. left off.

“Mitchell was my first phone call when I got here day one,” Campbell said. “That was because of just understanding what this young man was going through and having an understanding of what he was fighting to do. The fact that I want guys that love to play football — and here’s a guy that fought for his life to get himself back here to put himself in a position to play football. …

Here’s this guy that has sacrificed everything and has really gone through it all, fought through adversity, just to get back here and be a part of this football team. And Mitchell’s standpoint, if you haven’t talked to him yet, he’s not coming back for the story. He’s coming back to start. That’s what I love about him and his demeanor and his effort.”

Overcoming cancer — and Meyers said his last two PET scans have been clear — is simply an adversity-filled chapter in his action-packed book.

He said he truly learned who his friends — guys like Luke Knott, Grant Rohach and many more — are. Other teammates also showed support and drew strength from Meyers’s indomitable spirit.

“It was a good feeling having them there,” an emotional Meyers said. “Helped a lot — and being part of a team. Being part of this program, there’s really nothing like it from a support standpoint. I couldn’t imagine doing it by myself.”

Encouragement came from less familiar corners of the sports world, as well. Meyers said a Northern Iowa softball player (Katelyn Kinnetz), who has faced a similar road to recovery from Hodgkin’s lymphoma, reached out to him shortly after he was diagnosed last February.

“I remember she told me, ‘You know I had a stem cell transplant … but don’t worry, usually people don’t have to do that,’” Meyers said. “So I kind of didn’t think too much about it and once I realized I was going to have to do that, then we kind of came in contact again. She’s been a really good person to get some tips and pointers from. It’s been really helpful.”

Meyers will return to Houston for another scan in June. All signs point to him being able to be back in classes and starting workouts this summer, as well.

Sleepless nights nowadays aren’t fraught with worry. They’re teeming with promise. His strength inspires others and their support fuels his determination.

“It’s really big for us and I think it’s really big for him,” Campbell said of Meyers’s return. “He said he didn’t sleep at all last night and I can imagine not. Just to be be back and around and a part of our football team was huge for us.”

“I just came in to keep working hard,” Chandler said, “and try to make them notice me.”

ISU tight ends coach/recruiting coordinator Alex Golesh said Chandler’s stood out early in spring ball. It’s vitally important someone has given how much the Cyclones plan to use their tight ends in both the passing and run games.

“(Chandler’s) done a really good job,” Golesh said. “He’s, for a guy that hasn’t played a whole lot, he’s a guy we’re putting a lot on. Only senior in the group. Trying to bring (highly-touted JUCO transfer) Cliff Fernandez along and we’re using those guys. We need to use those guys.”

Golesh said overall work with the tight ends has been “just OK.”

“They’re getting better, which is what I like to see,” Golesh said. “But just continuing to coach the little things: effort, finish, first step, second step, hand placement — all those little things you expect is just so brand new with these guys. Literally it’s like starting in square one.”

Chandler’s on his last square, though, and he’s approaching it that way.

“I’ve just been coming in just thinking, you gotta keep working and you’re gonna get it,” Chandler said. “Stumbles gonna happen in front of you so you’ve just gotta keep fighting through adversity. That ain’t really nothing to me.”

WARREN’S NEXT STEP(S): No coach has set any numbers-driven goals for ISU’s star running back Mike Warren. They left that up to him — and his aim remains high.

How does Warren plan to get to that lofty plateau?

“A lot of sweat, probably a lot of blood, a lot of sacrifice, just a lot of hard work,” Warren said.

What coaches seek most from Warren is less tangible: Leadership. Improvement. Small tweaks that can create bigger gains.

Warren’s being asked to be more of a vocal leader. Is it natural for him? Not quite. Warren likes to lead by his actions, but something this mother, Barbara, has told him sticks in his mind.

“My mom always says, ‘You’re a leader even if you don’t want to be,’” Warren said.