Monte Morris not only looked healthy in Thursday’s 94-81 NCAA Tournament victory over Iona, he looked fantastic.

“He is better than he ever was,” teammate Abdel Nader said. “He played amazing.”

That’s 20 points and eight assists worth of amazing.

Morris has been fighting a nagging shoulder injury for almost a month now but apparently the week off following a quarterfinal Big 12 Tournament loss to Oklahoma helped.

“It’s the tournament,” Morris said. “I want to lay it all out there. I don’t want any regrets. I’m just going to give it my all every night. No matter if we win or lose or whatever round, I want to sit back in my couch and be able to say that I gave it my all. I have a good training staff and they are going to have my ready for Saturday.”

“When he made his first shot, then he made another three, he kind of had his swagger back,” Steve Prohm said. “I knew he was going to have to play well for us to be successful today. When we played well this year, Monte’s had great games.”

When Georges Niang grabbed his sixth rebound early in the second half, he became the fourth player since 1994-95 to record 2,000 career points, 700 rebounds and 400 assists. Niang, who struggled going 3-of-12 from the field in the first half, went 8-for-10 in the second period to lead Iowa State with 28 points.

“The guys were telling me to stay confident,” Niang said. “That’s what I did, tried to get the ball to the front of the rim. I think coach drew up a couple plays that helped me get there. Once I got a rhythm going, I felt like there was no turning back.”

Niang is now only 34 points away to set a school record for points in the NCAA Tournament. He is 20 points away from tying Barry Stevens for second on Iowa State’s all-time scoring list. 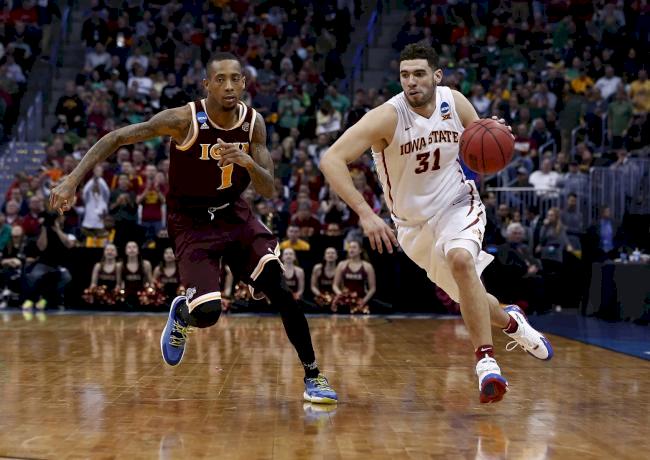 Got a little chippy

Jameel McKay and his former Indian Hills Community College teammate Jordan Washington were called for a double technical early in the second half. McKay says it was due to friendly trash talk between buddies but the officials didn’t quite understand that.

“They just gave us a technical because they didn’t know we were cool,” McKay said. “It wasn’t what it was hyped up to be. We were talking like it was no harm, just trash talking a little bit. I guess we deserved it but after we told them we knew each other they said, ‘Oh we didn’t know that.’”

McKay fell one rebound short of recording his fifth double double in a row. The big man ended the game with 11 and nine. Meanwhile Washington had a huge game for Iona by dropping 26 and 12.

“The whole game those guys were talking,” Monte Morris said. “Washington and Jameel went to the same JUCO. They had a rivalry going on. If somebody has a rivalry with Jameel or anyone on my team, I’m going to step in cause I’ve got a rivalry.”

Abdel Nader was fantastic on Thursday to the tune of 19 points on 6-of-9 shooting. He did however go to the ground hard in the second half after being fouled on a dunk attempt.

“I’m alright. I just kind of lost my balance,” Nader said after the game. “He hit me pretty hard. It was a good foul. I don’t think it was a dirty play at all. I lost my balance in the air and landed kind of rough. It looked worse than what it was.”

Good to go on Saturday, right?