CHICAGO — Thirty seconds. That’s all it took for Virginia (29-7) to land their first blow on Iowa State (23-12) Friday night at the United Center. Thirty seconds was all it took for Devon Hall to knock down a 3-pointer and to give the Cavaliers the lead for good before pulling away in an 84-71 victory in the Sweet 16.

The blows kept coming over the next nine minutes. A 3-pointer by London Perrantes that put the Cavaliers up by 10 in less than four minutes of game time. Perrantes’ second shot from behind the arc that made the lead 14 before the under-12 timeout.

Five straight points from Anthony Gill sandwiched around a Georges Niang layup that kept the Virginia lead at 15. A Mike Tobey tip-in and an Isaiah Wilkins dunk pushed the lead to the largest it was in the whole game at 17 points.

“They came out and made some tough shots, a lot of tough shots,” senior forward Jameel McKay said. “I mean, them scoring and them playing defense the way they do is going to make them hard to beat them any night. I think when we walked past them at the end of the game one of their coaches said, ‘That’s the best game we played all year.’ Got to be true. They couldn’t have played any better.” 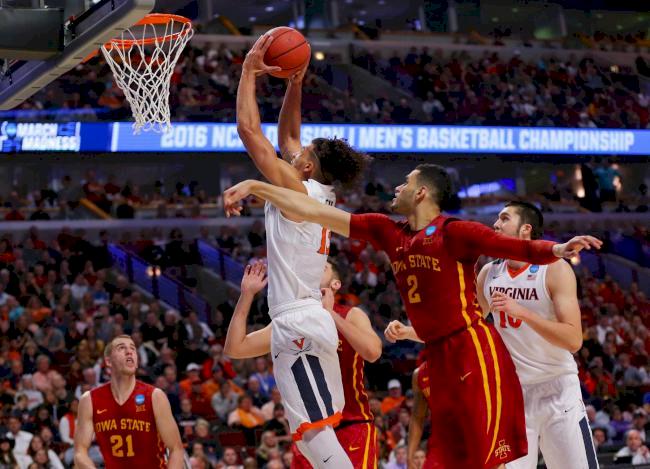 The Cavaliers did everything people said they would. They defended, they ran the shot clock and they made play after play after play. Iowa State cut the lead to 10 on a Niang 3-pointer, one of his three in the game, with close to a minute to play in the first half. Iowa State’s senior star was doing everything he could to keep his team in the game despite two first half fouls.

Then, Virginia just did what they do. They drew a couple fouls that allowed them to push the lead back to 14 before the halftime break. Gill blocked a Niang floater into the stands as the halftime horn sounded.

Virginia shot 60.7 percent from the field and 44.4 percent from behind the arc in the first half. They had assists on 15 of their 17 baskets. It’s tough stop an avalanche.

“We got it to 10 and I think we had a late shot clock. You know, and then, a tough shot, or whatever,” Iowa State head coach Steve Prohm said. “Then we gave them two bail outs to where we put them on the line to get it to 45-31, so we didn’t close the half there.”

It was a different Iowa State team that ran out of the tunnel after halftime. Each player trickled out individually instead of running out as a group. Whatever was said during that halftime worked.

The two teams traded baskets for the first few minutes of the half. Niang made a layup. The Cyclones got a stop. Niang made a free throw then Virginia star Malcolm Brogdon made a pair of his own. McKay threw down a thundering dunk then Monte Morris made a floater. 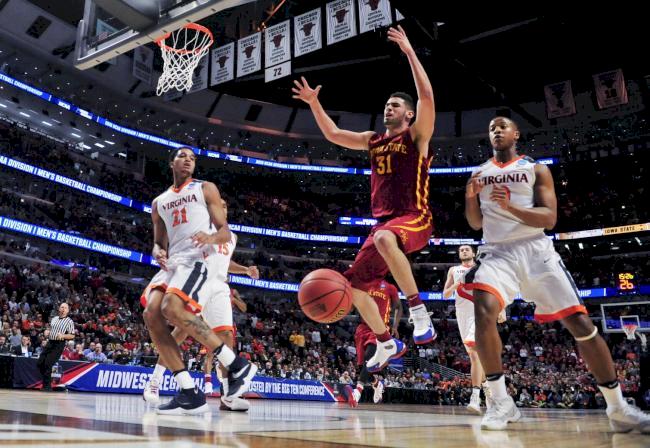 All of a sudden, the Virginia lead was cut to seven.

Tobey ended the Iowa State run with a basket through a foul that accounted for three of his 18 points. Niang came back with a jumper then the foul was called. Niang picked up his fourth personal when Marial Shayok pulled up for a jumper in the middle of the lane.

Was it a foul? I don’t know. Replay showed it might not have been but it was definitely the moment the game flipped. It wasn’t the reason Iowa State lost the game, but it sure did kill momentum.

“I probably could have done a better job of putting myself in better position,” Niang said. “Being a senior and not putting myself in a position to pick up fouls. Obviously that was frustrating, but this is do or die, win or go home, so I really just had to figure out a way to get through it. My teammates did a good job of encouraging me, and I’m just bummed that we couldn’t continue this run.”

Virginia pushed the lead back up to 15 before Niang, who finished with a game-high 30 points, was able to check back in with about nine minutes to play. The Cyclones never got back within 10.

“We get back and we get it going and I thought we were really flying around on the defensive end,” Prohm said. “(Georges) gets his fourth and I had to take him out of there. You know, hindsight I could’ve played him at 12, 13 minutes but my goal was to get him a two minute breather, get it to 10 and get him back in. But, you know, it went to 15.”

Iowa State wasn’t at their best on the offensive end but they were as good as anyone has been against the Cavaliers this year. The Cyclones’ 51.9 percent from the floor was the third best mark of the year against Virginia’s highly-touted defense.

“We run a lot of our plays through Georges, so when he’s not in the game sometimes things start to get stagnant but offense wasn’t the problem,” junior guard Matt Thomas, 12 points and knocked down a pair of 3-pointers, said. “We didn’t play our best game offensively but it was defense. They scored at will on us.”

It’s tough to stop an avalanche.

*** Iowa State made its 18th appearance in the NCAA Tournament and are now 18-18 all-time following the loss.

*** Georges Niang became just the fifth player to score at least 28 points in three straight NCAA Tournament games and the first since BYU’s Jimmer Fredette in 2011.

*** Niang registered his 44th-straight game in double figures to tie for the third-longest streak in school history. It was the fourth time this season (fifth in his career) that he scored at least 30 points.

*** Niang’s 718 points this season made him just the seventh Cyclone to score over 700 points in a season.

*** Matt Thomas finished with 89 3-pointers on the season, the fourth-highest single-season total in program history.

*** Niang, Thomas and Monte Morris all played in their seventh career NCAA Tournament game to tie the school record.