It’s nice to be writing this from my home office today.

Don’t get me wrong. Denver was awesome but like the Cyclones, I’m ready to regroup and move onto Chicago.

That was so painful.

With a about two minutes to go – shortly after the Panthers had regrouped from that little issue they had right before the final media timeout – I went to take my dog on a quick walk around the block so that he could take care of a little bit of business (if you know what I mean).

When I got home, it was in overtime. What? How?

In my mind, the only thing I could compare the meltdown to was Iowa State’s incomprehensible football loss at Kansas State this season (I still don’t know how that happened).

Big difference though: Iowa State was playing for win No. 4 while the Panthers were fixing to go to the Sweet 16.

The Kansas State did secure that Iowa State would have a new football coach though, so the outcome was incredibly significant.

2 – Once again, look for Ben Jacobson’s name to be tossed around with numerous high-major openings across the country. I actually think the way UNI lost last night helps assure he will come back to Cedar Falls though. There’s no way he wants to go out like that. Plus, Jake has proven time and time again that it isn’t about the money for him.

I could make an argument that based off of seeding; once again the league underachieved in this year’s tournament.

I could also make the argument that in November, we all thought this league would ultimately come down to (and be judged by) Kansas, Oklahoma and Iowa State.

Perceptions and expectations change throughout the season though, so I’d describe the Big 12’s opening weekend as, “meh.”

The ACC though…Six in the Sweet 16?

According to multiple reports,TCU has zeroed in on Pitt head coach Jamie Dixon to be the man who will replace Trent Johnson, who was fired last week.

On the surface, this is a curious move but when you consider the fact that Dixon is a TCU grad and that he’s been at Pitt for 14 seasons (and might have reached a bit of ceiling there), it makes sense.

Like in football, I get the feeling that TCU is a bit of a sleeping giant in hoops. The word “giant” is probably overstated, my apologies, but with a brand new facility and all of those recruits in that area, I think we all can agree that the Horned Frogs have overachieved during their first few years in the Big 12.

Dixon, who has led Pitt to 11 NCAA Tournaments in 14 years, would be quite the splash.

5 – What about Oklahoma State?

I just find it really hard to believe that a guy like Gregg Marshall is going to leave Wichita for Stillwater of all places. Does that not make sense to anybody else?

Three things I’ve learned over the years of doing this:

1) Agents dictate the names that are thrown out there as candidates for open jobs.

2) Agents, for the most part, are liars.

3) Gregg Marshall and Buzz Williams have been mentioned for 90 percent of the open high-major jobs in the country for damn near a decade.

I don’t know who is representing these guys, but he or she is good.

6 –The name Doug Gottlieb keeps getting tossed around the Oklahoma State blogosphere. Gottlieb, who currently commentates for CBS, can thank Fred Hoiberg for that. 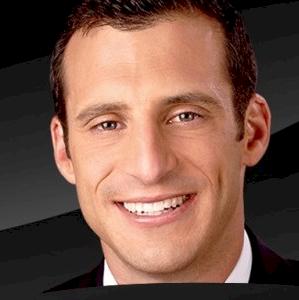 It’s intriguing, that’s for sure.

Personally, I like Gottlieb on the radio and television. He says what he thinks. I like the fact that he isn’t as polished as a lot of broadcasters. It’s kind of my style.

Can he coach though?

My guess is that he would be able to recruit.

He would also reenergize the portion of Oklahoma State’s fan base that appreciated watching him play. My guess is that he would relate to the younger Cowboy fans as well.

It’s worth considering. I know this: I would not kill the Cowboy administration if this is the route that they go.

Selfishly, I hope it happens as he would be a great quote.

7 – While I’m on the topic of coaches, congrats to former Cyclone Bryan Peterson who won a JUCO national title over the weekend as the head coach at Kirkwood. That’s pretty awesome considering he has only been in the business for a few years. Bryan is a great guy and to this day closely follows and supports the Cyclones. 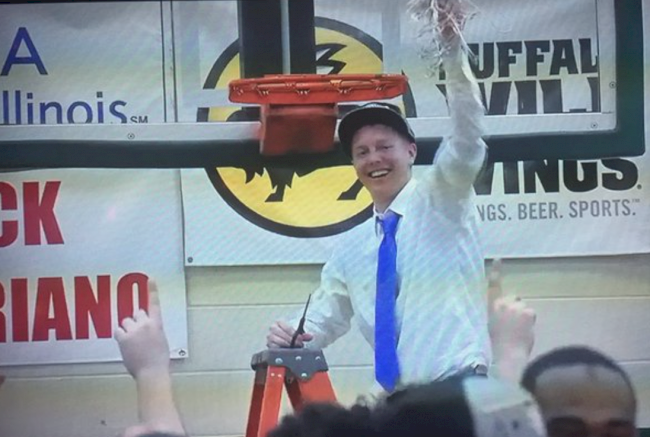 8 – From CBSSports.com, here are your tip times and television information for the Sweet 16. 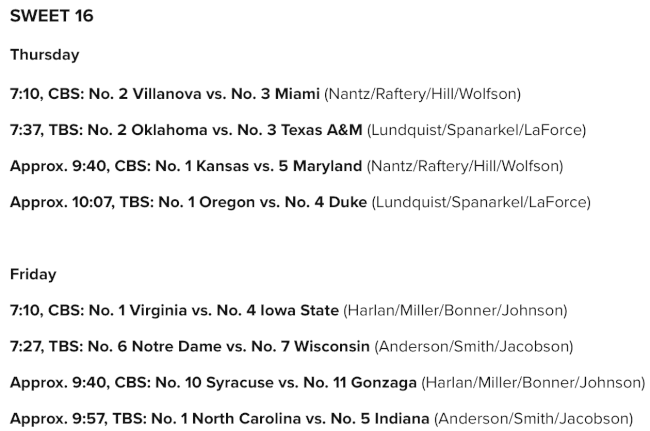 9 – Iowa State is currently a 5.5 point underdog to Virginia in Las Vegas. KenPom.com, where Virginia is the top ranked team in the country, has the Cavaliers winning 73-68 (gives Iowa State a 30 percent chance at victory).

Do you want to go with us to Chicago? Adam Gray has worked hard on this great package.

Also, we will have our Sweet 16 preview radio show tonight from 6-7 on 1460 KXnO. If you can’t listen live, I will post the podcast on CF later tonight.