Iowa State will be taking the court in the NCAA Tournament for the fifth consecutive season on Thursday, which is impressive in its own right but it has also been a top four seed for three consecutive seasons. That’s a pretty rare achievement in the history of Iowa State prior to this tournament run.

The first round opponent is the Iona Gaels, or Iowa State Lite as some have alluded. The Gaels are a smallish team that plays up-tempo and bombs away from beyond the 3-point line with a lot of success. They aren’t an especially deep team and they haven’t played an extremely noteworthy schedule, but KenPom.com does have their non-conference schedule as the 37th toughest in the country.

The fast paced Gaels are highlighted by their 3-point shooting and they have the numbers to back it up, significantly. Forty-four percent of Iona’s shot attempts are from outside the 3-point line, the 20th most in the country. But it is all worth it since they cash in on better than 37 percent of them (56th). For reference, the 2013 Cyclones attempted 44 percent of their shots from behind the arc (8th) and also made 37 percent of the attempts (34th).

If you combed through Jared Stansbury’s piece yesterday, you saw a few common themes from how they attack, and the undersized Gaels typically have done their damage off the dribble. Not so much by getting all the way to the rim to convert for points but solely to drive and draw help to then kick to an open shooter—and there are plenty of shooters. Nearly 61 percent of Iona’s made shots are assisted (26th most in the country).

Given their makeup for style of play and shooting ability, that screams drive and kick attack. Ideally, the Cyclones wouldn’t get beat off the bounce often but that is rare for any team let alone a team that is somewhat defensively challenged. When they do get beat defenders in the middle will have to decide between rotating to help, jabbing and recovering to their guy, or giving them free run to the rim which is hopefully a funnel to Jameel McKay. That, however, would require McKay to be very alert, in the right position, and stepping up to meet the driver earlier than later—an issue he’s had this year. That obviously sets a chain of events into motion of backside rotations to help down, and continued stress on a defense. 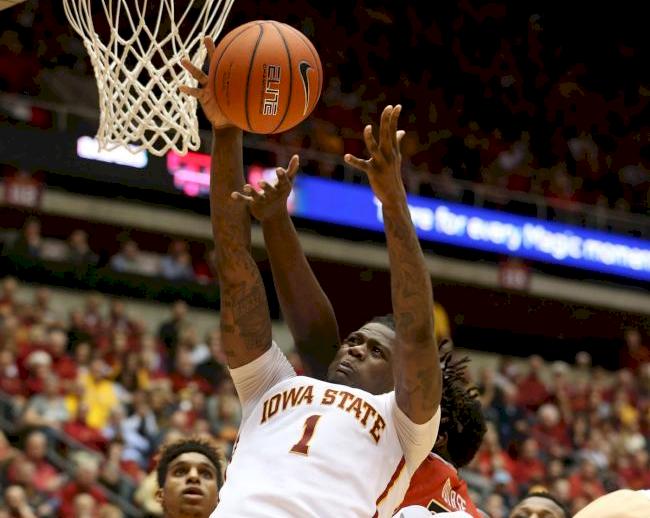 That’s why avoiding the dribble penetration in the first place is a big deal. Zone is typically unconventional against very good shooting teams but if many of the looks are coming off of the drive and kick game it would be an okay defense to test out. The added benefit for ISU that has struggled to grab defensive rebounds in the second half of the season is that Iona does not excel in that area. The Gaels have grabbed less than 30 percent of offensive rebounds (187th) even against their mostly subpar schedule.

The three guys that Iona relies on most heavily in all offensive things but especially in bombing away from long distance are star player A.J. English, Isaiah Williams, and Deyshonee Much. All three are wings with some height 6-foot-4 or taller and have attempted over 170 3-pointers. English has taken 246 and made 37 percent, Williams chimes in with 231 attempts and 36 percent accuracy, and Much has launched 171 and made 45 percent of them.

Those three guys will be on the court for pretty much the entire game while Aaron Rountree and Jordan Washington basically trade off time and rarely play together. Both are 6-foot-8 but Washington has more size with 255 pounds and sports the second best offensive rebounding rate in the country by grabbing 18 percent of his team’s misses when he is on the court. Though, he typically isn’t on the court for huge minutes and he averages 43 percent of minutes played per game.

Ibn Muhammad is the last major player in their rotation and has a pretty non-descript impact though he takes advantages of the chances he gets. He hasn’t taken as many shots, especially 3-pointers, but he has taken 91 and made almost 40 percent of them. He’s only 5-foot-9 but he can cause issues.

English is the star of the show and grabs all of the headlines and that is because of his scoring ability, but he makes a huge impact in other ways too. English has an assist rate of 34 percent (his assists compared to Iona’s made shots from everyone else while he’s on the court) which is the 32nd best in the country.

Matt Thomas will have to keep him out of the land and when Abdel Nader gets a chance on him, he’ll have to use his length and live on an island on penetration and try to force English to make tough shots over the top of him. Nader could certainly have a tough time guarding any of Iona’s guys on the perimeter if he’s having to chase them all over the perimeter where they will likely have the quickness advantage.

All in all defensively, Iona doesn’t do a ton that should scare Iowa State as long as they play to their average or better. Offensively, they offer up a unique attack that can be difficult for most any teams to defend. If they shoot it well from deep they will be able to hang around and cause problems for the Cyclones.

With all of the talk of Monte Morris’ shoulder, I did some digging on his performances and how it seems to correlate to the Cyclone offensive performances to get some data to backup how important he can be to the Cyclone’s scoring. While I was at it, I added in Georges Niang’s numbers as well.

I graphed the offensive rating of each of them for every game this season (right y-axis) versus Iowa State’s scoring efficiency (left y-axis). The chart below shows a blue line that reflects ISU’s best scoring outputs to worst as well as the offensive ratings for Niang and Morris.

What is pretty crazy is when you put a linear trendline on Morris and Niang’s game by game offensive ratings you can see just how closely it follows the team scoring efficiency output. 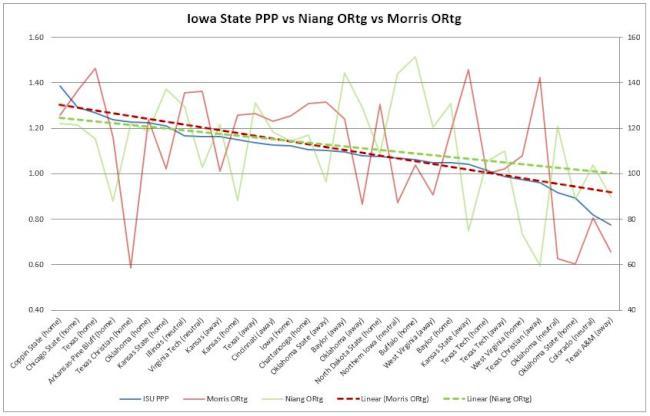 Morris is key and so is Niang—SHOCKING! But the tie of the numbers is profound. However well Monte can play on Thursday, Georges will likely have to play well to have a strong offensive showing and take advantage of the Iona defense and keep pace with their offense.