For a school record fifth straight year, Iowa State is headed to the NCAA Tournament. But as Cyclones fans are well aware, the first round opponent matters. Strangely enough, since 1995 Iowa State is 6-0 in the opening round as a 5 seed or worse. The Cyclones are 2-2 as a 3-seed or better, including last season’s first-round disaster against UAB. They have never been a 4-seed; until now.

Iowa State is a 4-seed and faces Iona out of the MAAC in a Thursday game played in Denver (1 p.m. on TBS). The Iona Gaels are located in New Rochelle, New York, which is about a half hour from New York City, pending traffic.

Let’s take a closer look at the opponent.

Iona finished the season 22-10 overall, but were 16-4 in the MAAC, finishing second to Monmouth in the regular season. The Gaels avenged matters by winning the conference tournament final over Monmouth 79-76. Iona has one of the longest winning streaks in the country, reeling off eight straight wins entering the NCAA Tournament. This is their third NCAA tournament appearance. In 2013, they lost to Ohio State in the opening round 95-70. Coincidentally, that game was played right before the Iowa State-Notre Dame game in Dayton.

The story of the game between the Cyclones and the Gaels will be speed. The Gaels have been known over the years for their up-tempo style under head coach Tim Cluess. Iona averaged just shy of 80 points per game, compared to Iowa State’s 82 points per game. The Gaels were 44th in Ken Pomeroy’s tempo stat, a tinge faster than Iowa State’s 53rd best tempo in the nation.

The Gaels like to get up and down the floor and fire at will, making over 10 threes per game on 27 attempts. Get ready for a track-meet in the high altitude of Denver. The Gaels’ frenetic pace is energized by versatility and speed. They lack the bulk of most Big 12 teams, but cause problems with their ability to score in transition and turn turnovers into offense. 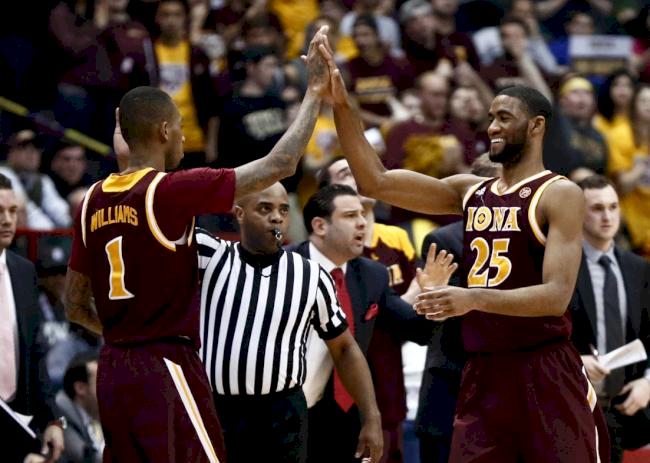 The Gaels attack is led by versatile guard A.J. English. The 6-foot-4 senior guard averages 22 points per game, the 10th best mark of any player in the entire country. English has decent size at 190 pounds and attacks off the bounce and in transition. English hasn’t met a shot he doesn’t love. He shoots it at a good clip at 43 percent from the field and a solid 38 percent from three. English has scored 30 or more points six times and 40 or more TWO times. He is essentially a lite version of Buddy Hield from a smaller conference. He is a playmaker in all areas and leads the Gaels in assists as well. The ball will be in his hands all the time. He will be number one on the scouting report for obvious reasons.

But English has plenty of help. Their next leading scorer is 6-foot-8, 255 pound forward Jordan Washington. The athletic forward actually spent two seasons with Indian Hills C.C. in Ottumwa, IA (the same JUCO as Jameel McKay and Dustin Hogue) before heading east. Washington put up 13.8 points and six boards a game. He cleans up inside and is very productive around the rim. He knows his limitations and is not a threat outside 15 feet. He is their only post with elite bulk.

On the wing is 6-7 senior forward Isaiah Williams. Williams is used on all positions of the floor and leads the Gaels in rebounding at 7 per game. But he is also their second leading 3-point shooter. He averages 13 points per game and is used to exploit match-ups. He will be a tricky match-up for Iowa State to keep off the glass.

Another combo guard/forward is 6-5 sophomore Deyshonee Much. Much is a transfer from Buffalo and is a knock down shooter. He leads the Gaels shooting 45 percent from three and isn’t afraid to fire in transition. Somebody better keep an eye on him at all times. He often finds himself with great looks thanks to the play-making ability of English.

The spark-plug for the offense is the mini guard Ibn Muhammad. The dynamo is only 5-9 and rarely looks for his own offense, but pushes the pace, takes care of the ball and is a pest on the defensive end. If you do forget about him, he will knock shots down and is a capable three point shooter at 41 percent.

Off the bench, the Gaels bring off 6-8 forward Aaron Rountree, a grad transfer from Wake Forest.  Rountree is only 200 pounds, but is very active and productive when in the lineup. He puts up six points and five rebounds and is a great energy guy off the bench.

A 6-3 freshman guard named Jahaad Proctor will come in looking to fire; over half of his shots are from deep. He averages five points on 29 percent shooting from three.

Another freshman is 6-1 guard Rickey McGill. McGill is a classic backup guard that will provide some depth, but isn’t a huge threat to fill it up.

The Gaels have relied on an 8-man rotation pretty much all conference season. They will turn to 6-10 junior Ryden Hines and 6-9 junior Taylor Bessick if they need extra size or are in foul trouble. But the Gaels prefer the eight man rotation and the versatility of guards and speed.

All things considered, this is a pretty fun matchup for Iowa State. They won’t have to deal with a big man like Johnathan Motley at Baylor or Devin Williams at West Virginia that has given the Cyclones fits this season. Iona has been out-rebounded by their opponents on average and had immense trouble with size when facing larger schools in the non-conference. The Gaels lost to Oregon State 93-73, Valparaiso 83-58 and Tulsa 90-81.

The Gaels can score with anyone, however, and Iowa State shouldn’t take them lightly. Their style of bombs-away offense makes them terrifying for any first round opponent as the three-ball is a great equalizer.

They will have huge issues defending Georges Niang, but everyone does. Abdel Nader will also be big off the bounce with his size and ability to overpower smaller opponents.

The key for Iowa State will be how the Cyclones keep the likes of English, Williams and Muhammad in front of them. The Gaels will relentlessly penetrate and kick and if they get to where they want to, they could put up a bunch of points.

I’m confident Iowa State will have little trouble finding good looks on offense, but expect a track-meet in Denver. The altitude is the great unknown and we shall see who responds with the most energy.

The Cyclones are back in it, let’s dance.