In three months on the job, you have managed to do something that I have yet to see an Iowa State football coach ever truly do here (and I’m getting old).

I see it more and more every day.

We’ve seen significant growth on our football forums at CycloneFanatic.com. Our football recruiting stories are being clicked three to four times as much as they used to.

There are a couple of reasons for this:

1) The honeymoon period is still very much in play here. Matt Campbell has never coached a game at Iowa State. He’s undefeated! This is exactly what coaching changes are supposed to do. In addition to changing direction within a program, modification at the top is supposed to energize a fan base.

And I know Iowa State fans. Season ticket sales will be through the roof next year. Just wait.

2) It’s a hell of a lot more fun for fans to follow recruiting when Iowa State is competing with other Power 5 schools.

How is John Doe supposed to get excited when the Cyclones are consistently competing with the Akron Zips and New Mexico State for recruits?

The answer is, they can’t. They don’t. They won’t.

After today’s class become official, I called up my buddy Alex Halsted from AllCyclones.com – part of the Scout.com network.

Halsted told me that when Campbell took over as Iowa State’s head coach in December, Iowa State’s class was ranked No. 84 with 12 commitments. At the time of publishing this column, Scout has Iowa State ranked 44th nationally – the highest ranking (by that specific publication) since the statistics have been kept (since 2002). Take a look for yourself.

So yeah, this was a great day for the future of Iowa State football, especially when you consider that Iowa State only had 23 “on the road” days to piece together this class and according to Campbell, only had half of a staff for half of those 23.

I fully realize that this doesn’t automatically give Iowa State a spot in next year’s College Football Playoff. Recruiting – especially football recruiting – is an inexact science. Five-star prospects can be busts. Two-star guys often times end up in the NFL. Development will always be key at a place like Iowa State. That’s the real challenge.

But give the Campbell staff a ton of credit here. As far as the rankings go – and right or wrong, rankings dictate perception – this guy pieced together the best class in Iowa State history in three months.

Campbell and his staff have done as much as they can do in a short amount of time to do it and as far as program momentum goes, that’s good enough for me.

I’ve been beyond burnt out on recruiting for years now. Today, I actually got excited again.

Now, onto my annual National Signing Day awards for the casual Cyclone fan with a little help from my birdies around the football complex.

Guy who will make the biggest impact next season

Clifford Fernandez, TE – He is another junior college prospect at a major position of need. At 6-foot-3, 255-pounds, Fernendez has a body that’s ready for the Big 12.

Most underrated player in the class

Josh Mueller, OL – A three-star offensive lineman who Iowa State snagged out of the state of Wisconsin. At 6-foot-6, 280-pounds, you’ve got to love his already existent frame.

Keenan Forbes, OL – A late, but important commitment for this class. Forbes, a 6-foot-3, 310-pound interior lineman, is a three-star prospect who Iowa State thinks can develop into a cornerstone of a future offensive line.

JaQuan Bailey, DE – In addition to providing the biggest National Signing Day surprise that Iowa State has received in sometime, JaQuan Bailey has an absolutely ridiculous highlight tape. The 6-foot-2, 245-pound defensive end has necessary size and that quick twitch you look for to put adequate pressure on the quarterback at this level.

Chase Allen, TE – Good luck finding somebody who can speak negatively about Allen’s dad, former Iowa State assistant coach (under Dan McCarney), Terry Allen. Chase chose the Cyclones over Michigan, Nebraska, Florida State, Oklahoma State and a handful of other. He’s already got a name that will resonate with fans but he’s a tough kid who the coaches say does everything the right way.

Tymar Sutton, LB – At 5-foot-10, 220-pounds, this kid reminds me of another former fan favorite, Jeremiah George. Take a look at Sutton’s highlight tape and you’ll see a guy who can put pressure on the quarterback and also be effective in coverage. He’s a heavy hitter too, which fans love.

Jamahl Johnson, DT – My birdies tell me this guy is a 6-foot-1, 310-pound walking ball of charisma. 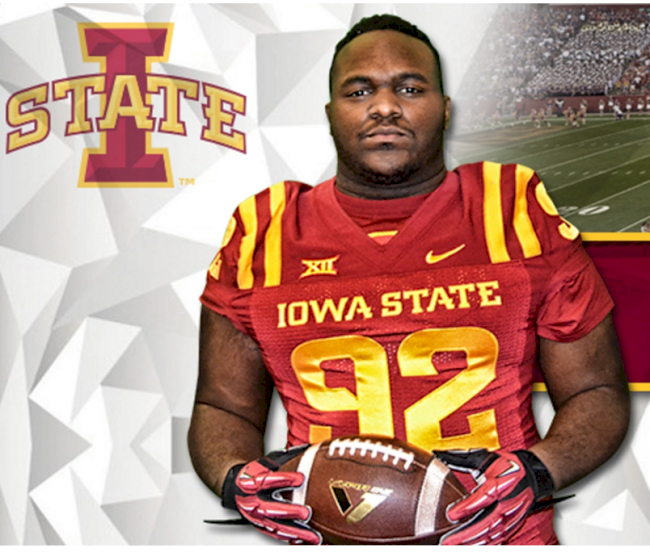 Most likely to someday become president

The Joel Lanning Award (goes to the meanest, toughest guy in the class)

Tyler Catalina, OL – Again, if he sticks with this commitment.

The guy who shouldn’t play next year but might

John Banta, K – The walk-on from Ankeny Centennial made 11-of-12 field goals last year including a school-record 54-yarder. Let’s hope that he’s not needed, but Cole Netten did struggle in big situations last year.

The guy with the highest ceiling

Jacob Park, QB – It has to be him. No other member of this class had the amount of accolades coming out of high school like Park, a former Georgia Bulldog. Out of prep ball, Park had offers from Georgia, Alabama, Auburn, Florida State, Notre Dame, Tennessee and others. He played in the 2013 U.S. Army All-American Game and was named Mr. Football in South Carolina. He’s going to be rusty though. Who knows what his future holds? The talent is there though, which means his ceiling is very  high.