AMES — Monté Morris has seen it all in nearly three complete seasons of high-level college hoops.

A Sweet 16 run. A crushing opening-day NCAA Tournament loss to an inferior team. A junior season filled with soaring wins, inexplicable downturns and a struggle to find consistency — and we’re not even to March yet.

Get hot, you’ll eventually turn ice cold. Get left for dead, you’ll miraculously revive. There are so many good, but flawed teams in this confounding 2015-16 basketball season that even Iowa State’s celebrated point guard can occasionally be caught scratching his head.

"Look at Texas Tech for example," said Morris, whose No. 17 team girds up for a matchup with plucky Kansas State (15-13, 4-11) at 5 p.m. Saturday at Hilton Coliseum. "Then boys rolling and I think they’re in the tournament now by (Joe) Lunardi’s bracket. That’s one team you can say went from cold to hot. Some teams done went from hot to cold and I feel we’re just trying to stay in the middle of that."

Despite a glowing tournament resume, the Cyclones (19-9, 8-7 Big 12) find themselves mired in the middle of the conference pack. Seven of ISU’s nine losses have come by five points or less or in overtime. Swing three or four of those — which you can’t, of course — and a regular season Big 12 championship remains a very real possibility, as does a potential No. 1 tournament seed. 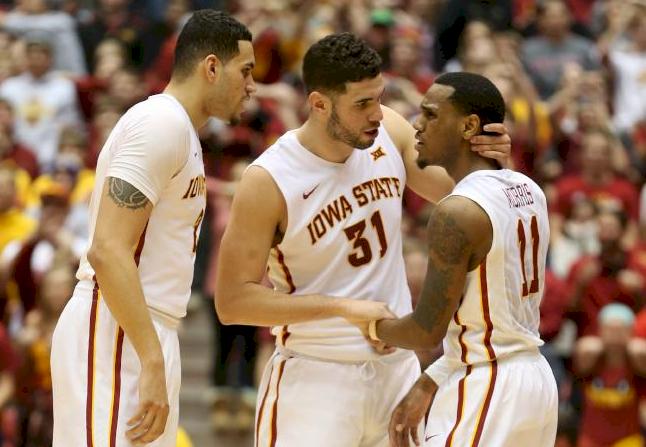 "We’ve had great wins. We’ve done it," ISU coach Steve Prohm said. "We’ve lost tough games on the road. But if you look at us from an offensive clip right now, we’re probably playing the best we’ve played. Our offensive numbers continue to get better and better. What we have to do is finish halves better and defend and rebound better. If we can do that, if we can put all that together, I thin everybody knows this team has a chance to do really special things.”

But what-ifs don’t amount to a hill of beans in this crazy, mixed-up Cyclone season defined by a 13-point win over Kansas and a two-point to Northern Iowa.

"If" must become "when" across the board. And it remains to be seen whether that’s possible, particularly on defense, where ISU ranks a pedestrian 134th in adjusted efficiency according to KenPom.com.

Everybody loves a good mystery, except when it becomes the basis for your favorite college basketball team’s season.

"I think it’s just mindset," All-American Georges Niang said when asked about the toughness factor. "On the road you have to have more energy in everything that you do. If somebody makes a pretty good pass you’ve got to tell them they made a great pass with some enthusiasm. When we’re playing at a high level is when we have the most energy. We’re flying around and not letting people get straight-line drives. So I think the biggest thing with us in everything that we do is just high energy.”

The Cyclones tapped their reserves deeply in last month’s 13-point win at Kansas State. It was the Wildcats’ most lopsided home loss of the season — and speaking of what-ifs, Bruce Weber’s not averse to wistfully looking back at blown opportunities, for good reason.

Five of K-State’s 11 Big 12 losses have come by three points or fewer and/or in overtime. Swing three of those … well, you get the picture.

"We get just half of those games then we are 18-10 and we are in the NCAA Tournament,” Weber told the Wichita Eagle after Monday’s one-point poss to Texas. “It’s no doubt with our schedule. But we aren’t. Now, I hope for these guys and their persistence and their heart and their courage that some good things happen down the stretch. That is all you can do, keep coming back. And they keep coming back."

That means a feisty bunch of Wildcats will amble into Ames on Saturday. It’s up to the Cyclones to turn their "heart" to stone, thus paving a path toward a possible hot streak sparked at precisely the right time — three days before the calendar turns to March.

"We usually play better going towards the Big 12 tournament, so we should be on the up and up," Morris said.

KENPOM SAYS: The Cyclones should win, 80-72. Win probability is pegged at 77 percent.