Iowa State’s senior big man fully adopted a leadership role last season after gaining eligibility at the midway point and no game signified his growth more than the epic comeback from 21 points down to Oklahoma.

McKay demonstrated what it takes to persevere through such wins — and what constitutes a “brotherhood”— by making a fist and enveloping it with his other hand.

“Can’t nothing stop us,” McKay said at the time. “We’re all one and can’t nothing break a rock. That’s how I feel. We stayed together and nothing broke us, through thick and thin and we came out with the win.”

Nearly a full year has passed and McKay’s dealt with a two-game suspension along with knee discomfort, but the metaphorical rock is making it’s long-awaited return. And maybe this time the No. 13 Cyclones (18-8, 7-6 Big 12) will be capable of propelling it closer to the peak of the NCAA Tournament mountain.

First obstacle from base camp: Last-place TCU (11-15, 2-11), which limps into Hilton having lost nine of its past 10 conference games. 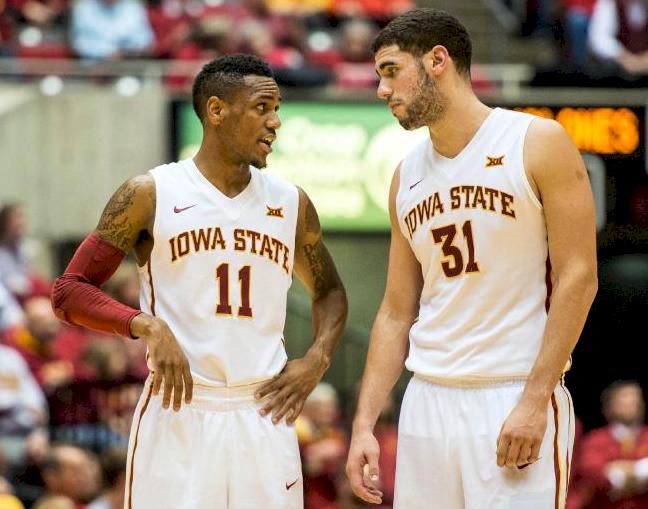 They’re also 17-point underdogs according to KenPom, which pegs ISU’s win probability at a robust 93 percent.

Still, you’ve got to start somewhere and for the Cyclones, the winding path back into elite roundball circles includes burying the psychic debris left behind by six grinding conference losses by a total of 29 points. Four came down to the last possession of regulation. Three of the four road losses came in overtime.

So the new and potentially improved version of the rock must instead by a boulder, crushing doubt, knocking down deficiencies; a formerly inanimate object animated by the dreams of seniors such as McKay, Niang, Abdel Nader and injured sharpshooting guard, Naz Mitrou-Long, who called a players-only meeting Thursday before practice.

Pain complications from offseason double-hip surgery forced Mitrou-Long to the sidelines eight games into the season. He hopes he can gain a medical redshirt and play ball next season, but this season still reigns supreme in his intense, team-building mind.

“At this point Naz is like an extension of coach and a player,” Niang said. “A player-coach or whatever. He’s seeing a lot. He’s not playing. And he’s played at this level recently and with guys on this team, so he had a lot to say because he can offer his perspective because he hasn’t been out there to show it. So I think that was huge for us.”

There isn’t a team in college basketball that’s not in need of occasional mental maneuvers to ensure focus doesn’t dim on a regular basis. Texas Tech clipped Oklahoma after coming back to beat ISU last week. Minnesota finally notched its first Big Ten win of the season by dumping No. 6 Maryland several hours after the Cyclones’ meeting occurred. A depleted Duke team shocked No. 9 North Carolina in Chapel Hill the night before.

It happens. This season, it happens a lot.

Minute deviations from game plans can lead to disaster. One breakdown on defense — or a fog-filled, yet brief lackadaisical sequence — often serves as the key point in games across the country.

Only the sharp survive.

“Everybody in the country wishes there were two or three games they could get back and finish better,” Cyclones coach Steve Prohm said. “You make one shot or two, we’re talking today about, ‘Man, unbelievable. We’re just doing such a amazing job.’ The line is thin and that’s at every level.”

Better to cross it with a rock than any set of numbers neatly assembled on paper. Nobody knows that better than McKay, who faced stern yet uplifting reminders from his teammates of how last season he formed “the rock" and now he must hit the quarry again.

“They got on me especially about being the leader that I was last year: when I’m vocal and I’m active and stuff like that and how they all feed off me,” McKay said. “I had never really paid it no attention, but it’s different when the media says it or a fan says it from when the people that you’re going to war with every day say it. They kind of hit home with me that they expect that out of me and they feel like it’s lacked. I don’t mind letting nobody else down but them and my family. If they feel that way, something has to change.”