“My left one,” the 6-foot-8 All-American eventually admitted. “Who you gonna tell?”

No need. It’s likely rough-and-tumble No. 14 West Virginia’s keenly aware of the Cyclone star’s latest list of maladies, which includes a banged-up left thigh sustained in Saturday’s 72-62 loss at No. 8 Texas A&M.

The Mountaineers (17-4, 6-2 Big 12) bring their intense press defense to Ames for the fourth time. They’ve never won in Hilton Coliseum, losing three previous matchups there by an average of 13 points. Still the No. 13 Cyclones (16-5, 5-3) know what that trapping pressure is capable of producing: a Division I-leading 10.6 steals per game.

“Have you ever been chased by a couple wild pit bulls?” Niang said by way of comparison. “That’s what their press really feels like. They’re everywhere.”

ISU counters with the cool leadership of point guard Monté Morris — along with Niang’s ability to evade traps and split defenders. Morris has reeled off 29 assists to just two turnovers in his career against the Mountaineers, but that doesn’t mean he finds piercing the press easy.

“They’re a pack of dogs in there ready to eat,” Morris said. “They’re out there hustling. Their coach (Bob Huggins) makes them play like that and I think that’s what gets their offense going. We’ve just got to take care of the ball if we want to be successful.”

West Virginia makes that difficult most nights. Even when the press isn’t forcing turnovers, it tends to tire opposing players out and can lead to less-than-ideal spacing in the half-court.

“We’ve got to do a good job of taking care of the ball, but with Georges and Monté and guys like (sixth man) Deonte (Burton) and Abdel (Nader), guys that have good skill level to where they can pass and dribble, hopefully, you just can’t — you’re going to turn it over some, you just can’t have live ball turnovers,” said Cyclones coach Steve Prohm, whose team seeks to expand its conference win streak to five. “You just can’t be 19, 20, 21 turnovers.”

And Niang can’t be far below 100 percent health-wise. By all accounts — including his own — he’s not.

“It’s just like little injuries here and there, you know, the grind of the season,” said Niang, who leads the Cyclones in scoring at 19 points per game. “Nothing that’s going to slow me down or make me change anything I’m doing. Maybe I’ll get a little more treatment, but other than that, I’m 100 percent ready to go.”

If he stays that way, the Mountaineers will find its press to be much more of a roll of the dice than usual. In the Cyclones’ previous three wins in the series at Hilton, they averaged just 13 turnovers. Why? Two of those teams (along with this one) rank top-20 in average turnover rate.

You can thank Morris for that.

“Obviously we feel comfortable when we have (him) bringing up the ball,” Niang said.

Niang will occasionally execute the same task — and his ability to pass both precisely and quickly could lead to transition numbers when the press is broken.

“He’s a little beat up, but you guys know Georges, I know Georges,” Prohm said. “Georges will be ready to go tomorrow and we’re going to need him because he brings so much versatility to attacking the press.” 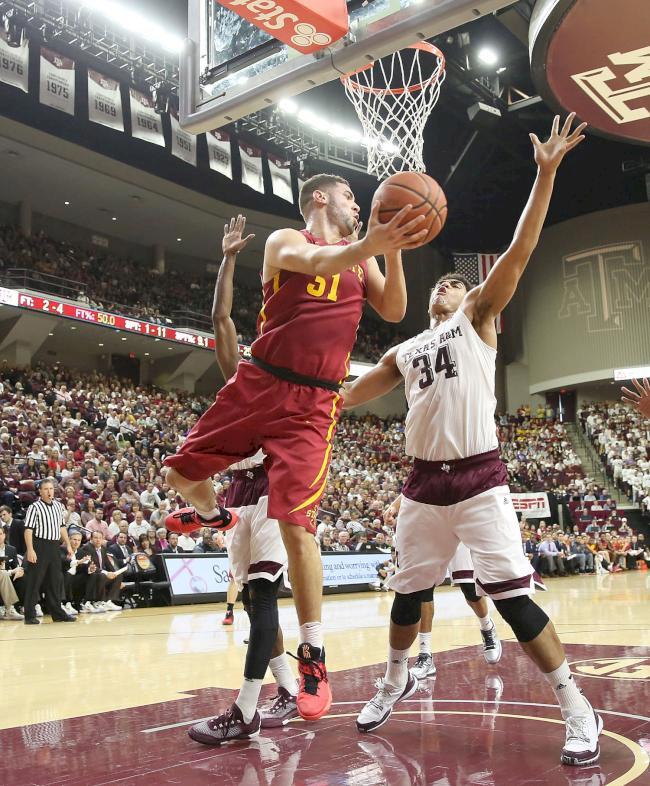 WANDERING WHISTLES: Rules changes and points of emphasis made big news at the onset of this season. Most were expected to facilitate better flow and improved offense. Lately, different patterns among officials have been detected.

“The only thing you really ask for is just the constancy," Prohm said. "You just want the consistency and that’s the one thing I think is tough. I think probably for all the coaches if you ask them, it’s  the consistency. Block/charge. Travel. Forearms. Flops. All those — hand checks — all those. It’s a tough job, but that’s the thing: the consistency is what you want and that’s all you can ask for. As a coach that’s the only time you really get frustrated a little bit, but again, when you go back and watch the tape, most of the time those guys are right.”

MONTÉ’S MEMORIES: The first time Monté Morris met West Virginia, he ended up taking a hard shot to the head from former Mountaineer Eron Harris. Why? Remember former Cyclone Dustin Hogue’s Kung Fu kick while going for a rebound earlier? Morris was told Harris’s hit amounted to retaliation. He’s moved on from it now, but it’s still indicative of how West Virginia likes/needs to play: tough, mean, occasionally nasty. "I feel like that play is in the past," Morris said. "The player that hit me goes to Michigan State now, so I don’t have to worry about that. But I just know it’s going to be a tough matchup every time we lace up against West Virginia. The rough fouls that they do, that’s just how they play. You can’t get mad at them. Thats just what they know. That’s what we  expect when we play those guys.”