1 – Jameel McKay made my Super Bowl Sunday when he posted the following on his Instagram page. 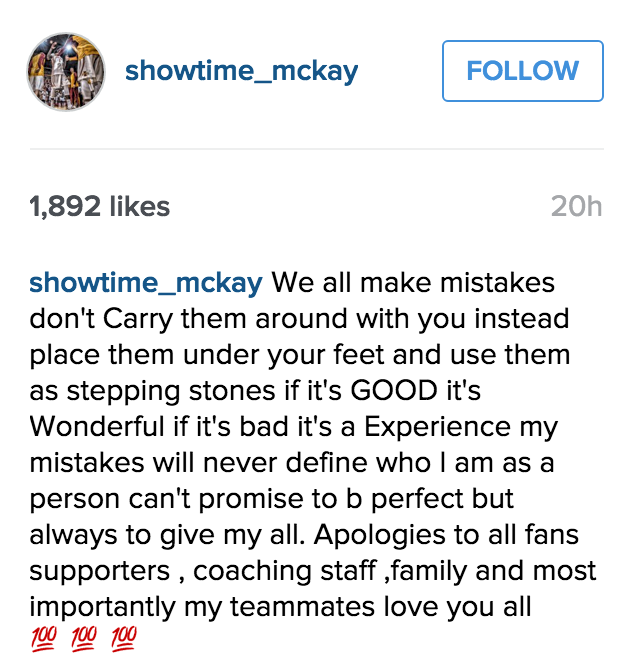 McKay and head coach Steve Prohm are reportedly going to meet today to discuss the senior’s future with the team but the fact that McKay is showing remorse for whatever it is he did to get in the doghouse is encouraging.

2 – That’s because while I totally side with Prohm for his move to indefinitely suspend the big man, let’s all be honest: Iowa State needs McKay if it wants to do any damage at all in the NCAA Tournament.

It’s a slippery slope though.

Iowa State needs McKay, but not the guy who has been around the program for the last month or so. It needs the Jameel McKay that fans grew to love last season and at moments this year. That’s the guy who can do special things in a Cyclone uniform – the Jameel McKay with a smile on his face.

3 – I love the fact that Steve Prohm stood his ground and said what he said following Saturday’s 64-59 victory over Oklahoma State. The Hoiberg years, while awesome, seem like a decade ago at this particular point in time. Prohm really has put a significant stamp on the program now – his program.

4 – My guess is that this all gets resolved quickly and that Jameel McKay is back in a Cyclone uniform on Wednesday night at Texas Tech (how much he will play is another story). McKay has likely realized that he needs Iowa State as much as Iowa State needs him. It’s a mutually beneficial relationship.

Now how about staying off of social media for the rest of the season?

To wrap it up, I feel like this is important to point out: Everybody, from fans to coaches to teammates, wants what is best for McKay. That’s the great thing about college athletics compared to the pros. Everybody is rooting for these young men and women to succeed on the court and in the classroom. There is so much support there.

5 – On Saturday night, I watched ESPN’s latest 30-for-30 documentary, this one on the 1985 Chicago Bears (it was fantastic). I found it interesting that the players on that team all noted that losing to the Miami Dolphins in the regular season was the best thing that happened to that particular group of guys.

I’m a glass half-full person and am hoping that this is a similar situation with McKay. He’s a talented, very likeable and valuable to this team.

6 – Last week’s Big 12 meetings were a little bland but that’s ok. In fact, I’ll make the argument that’s a good thing. The league has once again stated that going forward, it will have one voice – commissioner Bob Bowlsby.

This is how it should have been all along.

Oklahoma president David Boren is to blame for the bad PR the league has been hit with over the last month. It’s not as simple as that though. If Boren hadn’t stepped up and spoken his mind, would the league have pushed itself to make possible changes (for the better) going forward?

Squeaky wheels really do get the grease.

7 – Last but not least, here’s another reminder to join us on Thursday night at Thunderhead for the annual Cyclone Fanatic Football Recruiting Party. I can’t tell you who our special guests are but can tell you that it is their first time coming to a CF party. Let’s make it extra special for them. The party technically starts at 6. I anticipate the guests arriving sometime around 7.