AMES — It felt like 14th ranked Iowa State should have been trailing No. 4 Kansas by say, 13 points (or more) at halftime. Somehow, that is exactly how many points the Cyclones won by in an impressive 85-72 victory over the Jayhawks on Monday night in Hilton Coliseum.

In the first 20 minutes, Iowa State’s defense looked a lot like it did a month ago, awfully stale and inactive. The Jayhawks made nearly 60 percent of their shots (57.6 percent) and Iowa State’s best offensive player, Georges Niang, went a rare 2-for-8 from the floor.

At the break is when Iowa State’s first-year head coach Steve Prohm, whose confidence is visibly growing by the day I’ll add, challenged his team defensively. The Cyclones responded in a big way.

During an almost two minute span about halfway through the second half, Iowa State collected four steals on four defensive possessions in a row (which is hard to do against a bad team). That resulted in an 11-0 run. The Cyclones forced 10 second half Jayhawk turnovers while KU went 0-of-6 from 3-point range.

In the end, this game featured two teams that responded to adversity in complete opposite ways.

Iowa State was contested in the first half and bounced back to outscore the Jayhawks 49-29 in the second.

When Kansas got hit in the mouth, the Jayhawks folded.

"We didn’t show much composure when it got hot and that was disappointing,” Kansas coach Bill Self said after the game.

Iowa State has now four of its last five vs. Kansas.

WHAT’S WRONG WITH KU?: The following happens every year: Kansas loses a couple of games and we all start wondering if this is the year that the Jayhawks will be dethroned.

Then they bounce back and win the league.

History tells us that as long as Bill Self is the coach, there’s a good chance this group will too.

But to my naked eye, something seems different about this team.

Kansas lacked mental and physical toughness on Monday night, and this is a veteran team that we’re talking about.

The Jayhawks looked out of sync.

Is it fair to blame Self for the large amount of different lineups he has played so far this season? When I watch Kansas, it’s like Self doesn’t know who to play when. Game to game, there is no rhyme or reason for personnel decisions.

I’ll say this: I’ve seen Iowa State play Kansas, Iowa and Oklahoma live this year and I’d put the Jayhawks at a distant third behind the other two.

After Monday, KenPom.com is now projecting Kansas to finish 11-7 in league play. Should that happen, Kansas’ 11-year Big 12 championship streak will no doubt come to an end.

There’s a lot of basketball left to play though. 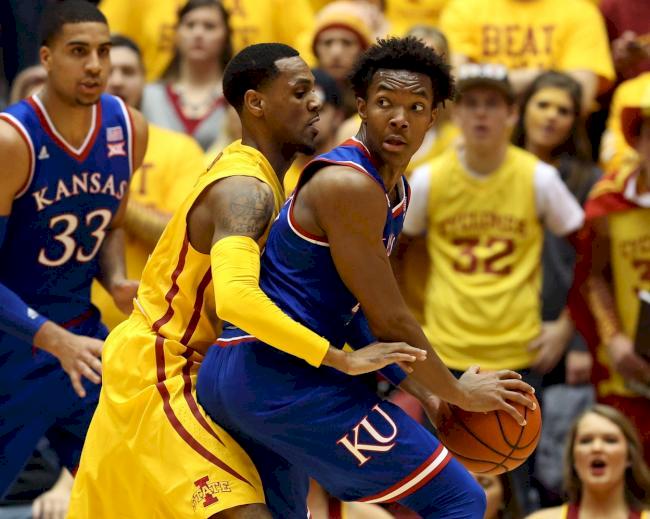 GEORGES NIANG IS TROY DAVIS: When Georges Niang is on (which he is most of the time), it is a beautiful thing to watch. Like a stud running back in football, even when the opposition knows he is getting the ball and exactly what he wants to do, they can’t seem to stop him.

That’s Niang in crunch time for the Cyclones. After struggling in the first half, Niang went 6-for-9 in the second period and finished with 19 points behind only the reigning Big 12 Player of the Week, Monte Morris who had 21.

“Plain and simple, that guy over there. We go how he goes, man,” Niang said of Morris. “That guy has carried us this whole season and I couldn’t be happier for the kid. He’s just doing great job for us. Really fighting through ball screens and doing a great job of getting us all involved and he’s doing a great job of leading this team, so I would say Monté really sparked the plug.”

Morris added nine assists (and zero turnovers) to his incredible stat line. In his seven career games against Kansas, Morris has dished out 37 assists to only seven turnovers.

Back to Niang, who passed Victor Alexander to move into fourth on Iowa State’s all-time scoring chart. The Iowa State senior is 95 points away from third where he will eventually pass – you guessed it – Fred Hoiberg.

UNSUNG HEROES: This is why as fans, you should never get too down on guys when they have a bad game or two. Iowa State needed Abdel Nader and Deonte Burton on Monday and both men played very well.

Nader was an efficient 6-of-9 from the floor, had 17 points and collected four steals.

“Huge defensive plays and that’s Abdel’s MO,” Niang said. “He just wants to be the guy to guard the other team’s best guy and really get out there and stir up things. He’s so long and lankly and does really good job of getting in those passing lane. He got a couple crucial steals Monte throw a lob to him, He played great.”

Burton struggled defensively but was silky smooth on offense by going 4-of-5 for nine points in 17 minutes.

A MAJOR OPPORTUNITY AHEAD: Iowa State has now beaten three of the top five teams in the current AP Top 25 (1. Oklahoma, 3. Iowa, 4. Kansas).

I’m not exactly sure how I feel about Saturday’s oddly timed road trip to Texas A&M but the Aggies are currently ranked fifth (nobody saw that coming in October).

After that, 9th ranked West Virginia will come to town next Tuesday.