This is for the casual recruiting follower? However, the diehard, film-watching recruiting geek might like it too.

To be honest, covering Iowa State’s football recruiting efforts is next to impossible these days. It truly is a full-time job in and of itself.

Matt Campbell’s staff is young, energetic, active on social media and offering what seems like 25 kids a day.

National Signing Day is less than three weeks away and a critical three days are approaching when it comes to last minute official visits.

Here are five key storylines to watch between now and then.

This staff loves offensive linemen and wants more of them

The addition of former Minnesota commitment Sean Foster, a four-star offensive lineman was huge earlier this week but don’t surprised if Iowa State takes one or even two more offensive linemen in this class.

Trying to flip a prospect away from his home still will be a difficult task to achieve but the retirement of Gary Pinkel (Castillo committed to Missouri on April 19, 2015) gives Iowa State a shot.

— Back to Sean Foster for a moment…He’s a four-star kid who by all means is a solid commitment to Iowa State but considering the time of year it is, it is expected that Iowa State will have to play defense here to protect him from other schools that might make a hard push late.

Make no mistake about the fact that this staff loves Joel Lanning. Matt Campbell’s crew has been very vocal about that on and off the record since taking over.

However when Grant Rohach transferred to Buffalo earlier this winter, it left a hold on Iowa State’s offense as to who the backup quarterback will be in 2016.

I’m told that Iowa State is looking at junior college quarterbacks but it has been very hush-hush on who those young men might be.

I don’t even have a name to give you guys but will not be surprised in the slightest if a junior college quarterback is a last minute addition to this class.

My guess is that when spring ball rolls around, we’ll hear the Campbell staff talk about what they refer to as the “M” position. Think of Percy Harvin at Florida – a guy who can line up in the slot, at running back and return kicks.

Iowa State is in the hunt for a guy like this and it could come in the form of Adrian Killins, a current Central Florida commitment out of Mainland, Fla.

Killins, a shifty 5-foot-8, 175-pound prospect, was recently offered by Syracuse and Kansas to go with Iowa State, Temple and UCF. I’ve heard that wherever he goes, Killins will likely also run track as well.

Per a source, Killins will be officially visiting Iowa State this weekend along with another running back named David Montgomery, 5-foot-11, 190-pounds out of Ohio.

Rhode Island transfer Tyler Catalina has already signed a financial aid agreement with Iowa State but that is different than a National Letter of Intent in the sense that it is binding only to the Big 12, not specifically Iowa State.

Technically, if I understand this correctly, Catalina could still play somewhere else next season as long as it isn’t in the Big 12.

Earlier this week, Catalina re-tweeted his brother, who announced that Florida and Missouri had offered.

This is a huge deal: Catalina, a fifth-year senior, is all but guaranteed a starting spot on Iowa State’s offensive line next year. This might be the biggest story to track from now until National Signing Day (and beyond). 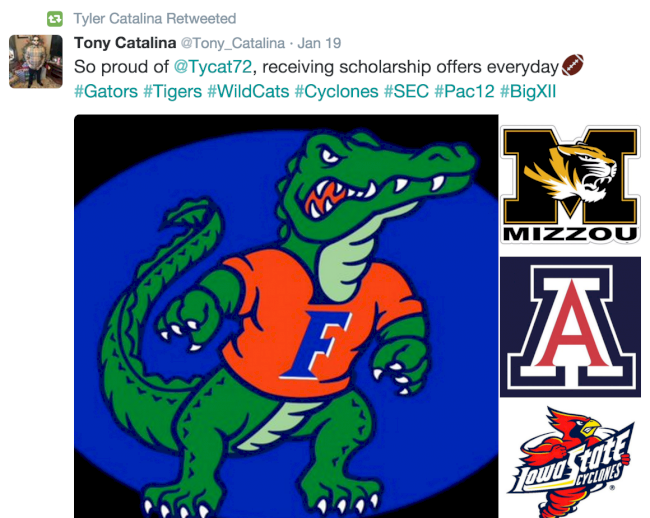 A big weekend ahead

According to a source, Iowa State will host seven official visitors this weekend, who are listed below:

Provonsha Wells, TE, Florida – The 6-foot-6, 217-pound tight end out of St. Petersburg recently received and offer from South Carolina. He visited Central Florida last weekend and in addition to Iowa State, will take trips to South Carolina and Marshall before making a decision.

Calvin Jackson Jr., WR, Florida – You’ve got to like Iowa State’s chances here with the 5-foot-9, 160-pound Toledo commitment, who also has offers from Bowling Green and Akron. That’s awfully small for the Big 12…

Alaric Jackson, OL, Michigan – Iowa State is in a slugfest with heavy hitters Iowa and Nebraska for this 6-foot-7, 285-pound tackle. The big man is in Iowa City today and plans to make an official to Iowa State on Sunday.

Adrian Killins, WR, Florida – Refer to the top of this piece for more information.

Chase Allen, TE, Missouri – The 6-foot-7, 225-pound tight end out of Missouri took an official visit to Michigan last weekend and Minnesota on Dec. 4. He is in Lincoln, Neb. today and will be at Iowa State for  “Big Monday’s” hoops matchup between the Cyclones and Kansas.

It’s probably a long shot but if Iowa State can somehow pull the following off, it would be an absolute game changer for the 2016 class.

According to a source, twin brother defensive linemen Joshua and JaQuan Bailey out of Jacksonville, Florida will officially visit Iowa State.

The brothers, who each hold a handful of impressive high major offers (from teams like Louisville, Virginia Tech, North Carolina, Tennessee), apparently want to play together at the next level.

Jacquan is a former Florida commitment.