Oklahoma’s well-traveled and supremely respected Lon Kruger called Prohm in June to congratulate him months before he’d be initiated into Big 12 play.

“I know him the best probably of any coach in this league,” said Prohm, whose 11th-ranked Cyclones will try to topple the No. 3 Sooners in Saturday’s 6 p.m. (ESPN2) Big 12 season opener for both teams. “We go back a long way. Not from a standpoint of like we’re buddy-buddy, but when I was in college at Alabama, I used to go work his camps at Florida, at Illinois when I was trying to break into the business. He’s a guy as a young coach I really look up to.”

Speaking of Buddy (Hield), he’ll obviously be the focal point for ISU (11-1) on the defensive end.

Hield has simply sparkled while his team’s rolled to an 11-0 start — it’s first flawless pre-conference run since the 1989-90 season. Hield’s shooting a mind-spinning 52.9 percent from 3-point range and has scored 25 points or more in five straight games.

Hold him down, and ISU’s got a chance to leave the Lloyd Noble Center as the victor for the first time since 2012. Let him roam — especially on the break — and an 0-1 start to Big 12 play becomes almost inevitable. He’s that good. Great, even. Hield, like Cyclones star Georges Niang, is a preseason All-American.

“Buddy’s a real great player,” said Niang, who ranks second to Hield among Big 12 scorers, averaging 18.8 points per game. “I think his intensity throughout the whole game is what really makes him great. He can really lull you to sleep sometimes in the half court then come quickly off a screen and really make shots. But I think the biggest thing with him if you watch games is he really gets a lot of easy buckets, open 3s in transition. So that’s one thing we want to take away and make him earn every bucket.”

That means better closeouts. Improved communication on high ball screens. Greater urgency all-around from a team that allowed an outclassed Coppin State squad to stroke it from deep at a startling 17-for-30 clip in Wednesday’s 104-84 win at Hilton Coliseum.

Oklahoma point guard Jordan Woodard joins Hield in shooting 50 percent or better from long range. Big man Ryan Spangler — whose famous point-blank miss in last March’s Big 12 Tournament semis, helped the Cyclones surge to a second straight championship — is one of 26 players in the country averaging a double-double each game. He can shoot the 3-ball, too. Spangler’s hitting 47.8 percent of his shots from beyond the arc.

“I know it’s going to be a rough game down there,” said ISU assist-to-turnover wizard Monté Morris, who eclipsed the 400 assist mark in the Coppin State win. “We were trying to put emphasis on getting back on defense because playing them previous years, Jordan Woodard gets the ball out pretty fast and looks up the court to guys like (Isaiah) Cousins and Buddy Hield, so I think going into Saturday a big key for us is going to be getting back on defense and making them make tough shots. They’re going to make shots. They’re good players. I know we have a good scouting report with our good coaching staff. So we’ll see what the result (is) Saturday.” 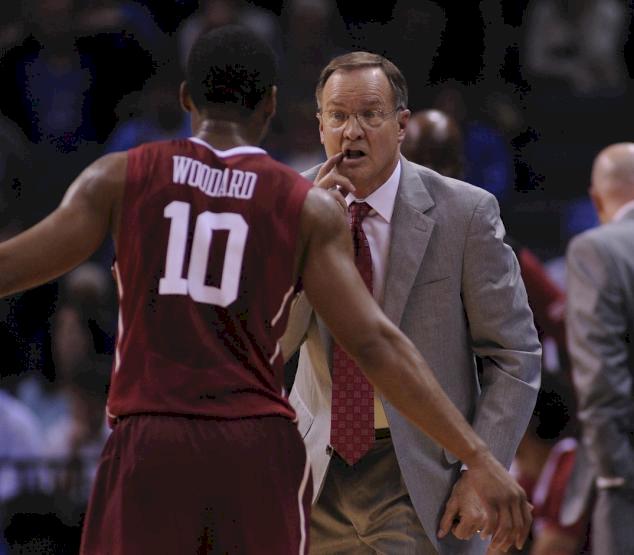 Hield’s cardinal and gold enemy number one. ISU held him to 37 percent shooting while winning two of three against the Sooners last season, but Hield’s operating in a different realm now.

“We’ve got to be locked into him at all times,” Prohm said. “Like Georges mentioned, he’s so good in transition. He can take the ball from rim to rim. He can run the wing. We can’t give him anything easy. That’s the biggest thing. We have to know where he is at all times, starting in transition. When that ball’s shot at our end, we’ve got know where Buddy’s at.”

Right now, that’s the top of the scoring chart. Needless to say, Hield and Kruger plan to offer a different welcome to the Big 12 message to Prohm now that it’s nearing game time. The meat of the schedule makes no room for well-wishes. Casual friendships take a back seat to hard-earned championships — as they should, so it’s game on.

“Coach even said it to us before the Cincinnati game, this is the reason he came to Iowa State, to play big games like this,” Niang said. “If you want to be the best, you’ve got to beat the best, so why not start out at Oklahoma?”