ESPN analyst Jay Williams heard stories — legends, really — about this Midwestern monument to basketball and the reverberations that pounded furiously within its concrete walls.

Years ago, the former Duke star played in one of the most storied venues in the history of college basketball, Cameron Indoor Stadium, so he’s fully accustomed to charged, spine-tingling game-day atmospheres.

Still, Hilton Coliseum proved to be a unique experience. Not necessarily “better” than many of the great, historic sites stretching from Pauley Pavilion to Allen Fieldhouse to Durham, N.C., but one Williams won’t forget. One many of you will both conjure and feel during Iowa State’s 8 p.m. Big Monday matchup with Kansas, as 14,384 fans summon the power of their lungs, clapping hands and bounding bodies to create the stirring, ear-bending, and somewhat disorienting home court advantage known as “Hilton magic.”

It’s real. It comes from you. It’s time to tap it again as Georges Niang tangles with Perry Ellis and Monté Morris seeks to sidestep Frank Mason III.

The No. 19 Cyclones. The third-ranked Jayhawks. Game on, again.

“There’s some magic at Hilton,” Williams said with emphasis last week during a conference call. “I couldn’t hear myself think last year (during a College GameDay stop for ISU-Kansas). It took me about 10 minutes to actually gain my composure coming out of that gym that I was actually able to have a calm, decent though. It was that kind of environment. It was the most electrifying place I’ve been into (while) doing College GameDay.”

Williams won’t be here for Monday’s clash between ISU (15-4, 4-3) and Kansas (16-3, 5-2), but ESPN will be, beaming out sights and deafening sounds from a second straight Big Monday the surging Cyclones hope to turn into another momentum-building win, a la Oklahoma a week ago.

The Cyclones enter the game on a three-game winning streak. They seem to be loose, not overly jacked up about facing every Big 12 team’s arch-nemesis — just as they vowed to be months ago on media day, where talk of Kansas, which has won outright or shared 11 straight conference titles, became almost philosophical in nature.

Right now, finally, that’s Kansas. Here’s a look at some key elements of the game:

Last season, ISU’s record-setting point guard averaged seven assists per game as the Cyclones went 2-1 against the Jayhawks, a solid mark that included a soaring 86-81 Jan. 17, 2015 triumph that coincided with that one and only College GameDay visit. 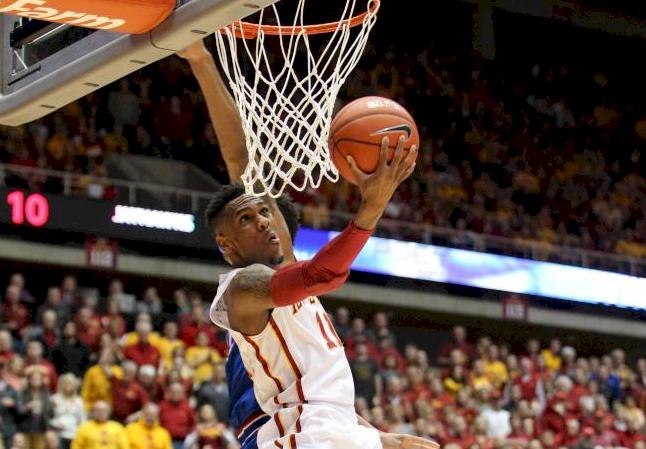 Morris has also been explosive lately, averaging points over the past five games. He’s also shot 62.7 percent from the field in that span.

He did record an unconventional double-double (for a point guard) Saturday in a win over Texas by scoring 17 points and hauling in 10 rebounds.

Make no mistake, Morris will be jacked up for this battle. And when he’s hyper-focused, look out.

Want an up and down game? As usual, you’ll probably get it when the Cyclones and Jayhawks meet.

Kansas features an offense that ranks 14th, according to KenPom.com in adjusted efficiency at 116.8. ISU? KenPom’s slotted it sixth nationally in the same category (119.2). Both teams shoot the ball extremely well, but the Jayhawks are elite from distance, ranking fourth nationally in 3-point percentage at 43.4. The Cyclones, meanwhile, are sixth-best nationally in 2-point percentage at 57.4. Both teams take care of the ball, with ISU sitting 16th, according to KenPom, in turnover rate at 15.2 and Kansas a ways back at 44th (16.1).

As for the crystal ball? Color it cardinal and gold. KenPom projects an 85-82 Cyclones win, so buckle up as usual.

But beyond the usual suspects, telling stat lines and such, If there’s anything Kansas vs. ISU at Hilton has demonstrated in recent years, it’s that the established stars don’t always steal the show.

The magic, however, always does. Thanks to you. Thanks to players such as Niang and Morris — as well as other stars of the recent past such as Melvin Ejim, DeAndre Kane and Royce White, plus pioneers such as Barry Stevens, Jeff Grayer and Jeff Hornacek.

So revel in it. If Jay Williams and his colleague Seth Greenberg had visited Hilton during the McDermott years, their view of magic would be overshadowed by skepticism.

“It’s a different environment than Kansas,” Greenberg said on the teleconference. “I mean, Kansas, that building just reeks with the tradition; the pageantry of playing a game at Kansas and I’ve played there and I’ve also coached there — we’ve obviously seen it through a lot of different prisms. That experience is something that you don’t forget. Now Ames, it’s just kind of really, the intensity of the fans, and the passion and the ownership is hard to explain. It’s so bad that you’ve got to turn down the crowd noise so you can hear the broadcast. I mean, that’s how crazy it is, so (it’s) the fanatics of Ames and opposed to maybe the tradition of the Phog. Ames, the fans at Iowa State, are just incredibly passionate.”