AMES — Foes around the Big 12 Conference know Naz Mitrou-Long as a charismatic and intense Iowa State Cyclone who excels at hitting clutch shots in February and March.

Around Ames these days, Mitrou-Long’s selfless fortitude is what those inside Iowa State’s locker room are talking about.

Unfortunately, a new normal now surrounds the senior leader from Mississauga, Ontario, and it is a painful one.

It’s well known that during this past offseason, Mitrou-Long underwent two arthroscopic hip surgeries (March 31 on his left hip and May 7 on his right) to alleviate chronic pain that he suffered through toward the end of his junior campaign. This was especially apparent during Iowa State’s second-round NCAA Tournament loss to UAB (Long went 2-for-9 from the field in that game). He was clearly nowhere near 100 percent.

It all probably went underreported (my bad on that), but Mitrou-Long’s summer was utter hell both mentally and physically.

“It was easily one of the hardest times of my life,” Mitrou-Long said. “I know that without this game, I wouldn’t be here. It’s done so much for my family.”

Physically, there was a combined span of one full month where he couldn’t walk (two weeks for one hip, two weeks for the other).

When Mitrou-Long finally got cleared to resume basketball activities in September, he made the most of the small amount of time he had to prepare for perhaps the most anticipated season in Iowa State basketball history. The goal, a lofty one, was to be ready for Nov. 13’s season-opener against Colorado.

“I was in the gym three or four times a day,” Mitrou-Long said. “I lived in there and just did whatever I could. I stretched a lot. I knew that I wanted to make myself available for the season opener.”

He made it back for the opener (and scored 13 points in 32 minutes as Iowa State edged Colorado 68-62) but Mitrou-Long’s appearance in Iowa State’s first eight games of the season could have come at a price.

Mitrou-Long, who missed Sunday’s game against Arkansas Pine-Bluff to rest his hips, admittedly hasn’t been the same guy that Cyclone fans have watched grow over the last three years. He is currently 16-for-55 from 3-point range (29 percent). Take a 6-for-9 performance vs. Chattanooga away and Mitrou-Long’s 3-point percentage on the season is at 22 percent (10-for-46). Mitrou-Long was a combined 40 percent 3-point shooter over the last two seasons.

“I’m a firm believer in all aspects of life, not just basketball, you get out what you put in,” Mitrou-Long said. “I wasn’t able to prepare for the season like I wanted to. I lost six months. I wasn’t able to get the workouts in and so forth. It’s tough on my body. I still feel a little bit of pain. I’m fighting through that. It’s fatigue and stuff like that.”

Like a catcher who takes a beating in baseball, Mitrou-Long might need off days from time-to-time this season.

“His body is banged up," head coach Steve Prohm said after Sunday’s game. "He’s really not where he wants to be physically. We thought we could get through this game hopefully without him so what this was going to do by sitting him today, it gets him a competitive game that he doesn’t have to play in. No more wear and tear on his body. We’re off tomorrow. Light on Tuesday and he can just get an extra good day of rest for him to get ready for Northern Iowa. It’s a one game thing. We will continue to get Naz healthy and he has to continue to fight through some pain. He is one of our leaders.”

If you’ve watched closely, you’ve witnessed a change in Mitrou-Long’s game so far this year and it is by design. Mitrou-Long is attacking the basket more for a reason.

“My legs just don’t feel like they are into it,” Mitrou-Long said. “It’s tough. I am just trying to do the little things like scoring in transition and getting easy buckets for us. Just playing some defense. Right now it’s all about sacrificing for the team.”

Naz is sacrificing all right.

So why rush the rehab this fall? Why play through the constant pain? Why not just sit out the first quarter of the season and get right?

“Because we are winning and ultimately that’s what matters to me,” Mitrou-Long said. “If we weren’t winning, I would probably be in a depression right now. But we are winning so it’s all good."

Naz Mitrou-Long is a team-first guy. Some pay lip service to that concept. He lives it.

Other Cyclones might score more points, collect more rebounds and grab more headlines but if you take a poll within Iowa State’s locker room, most will tell you that Mitrou-Long is the heart and soul of this team.

Iowa State assistant coach T.J. Otzelberger recruited Mitrou-Long to Ames and saw this from day one.

"At the time, we were looking for someone who could play both guard positions and had the ability to shoot the ball,” Otzelberger said. “Naz quickly moved to the top of the list because of his work ethic and passion for the game. Every coach he had played for talked about how valuable he was beyond the stat sheet. That has more than proven to be true. He’s the best teammate that have I have ever been around and winning is his top priority"

This is exactly what makes Mitrou-Long so valuable to this specific Iowa State team.

How can you quantify what leadership and vocal energy mean to a program?

KenPom.com doesn’t have a category for guys like Naz Mitrou-Long. 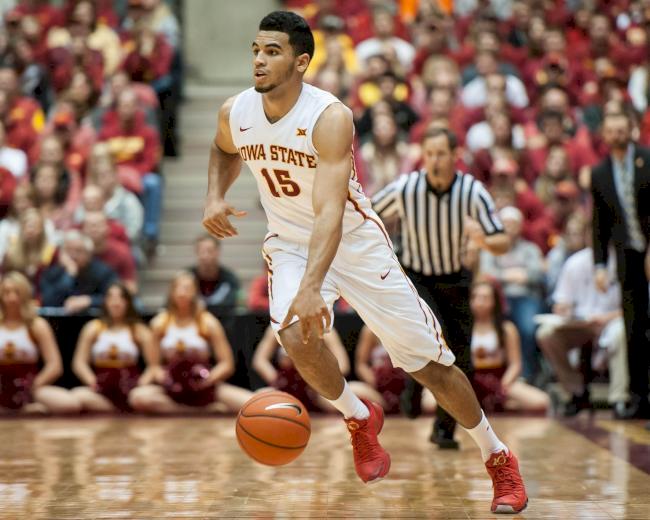 More from our exclusive with Naz (in Q&A form)…

CF: Obviously Iowa State fans love you guys because you’re good, but I’ve been around long enough to notice there is something special about this group’s relationship with the crowd. What is it?

Naz: “I feel like when you are in a certain place for a certain amount of time like us being here for four years now, you definitely build an emotional attachment with the community but the people too. You meet so many people. Seeing similar faces, it becomes so consistent. I can spot different people all of the time because that gratitude is always there. We’ve shook hands so many times. We’ve hugged. We have definitely been building an emotional attachment, especially because all of the things we have been through. There were the championships down in Kansas City and going through games like last night (Iowa). It’s like your family growing up. They have been here for everything and that relationship continues to grow.”

Naz: Yeah, that’s the reason why I committed. T.J. and Coach Hoiberg recruited me. People like that were cool but it was really the fan base. When I walked into Jack Trice on that specific Saturday, I looked around, saw the support for that team and I was blown away. That was the start for me and it was all because of the fan base. It is second to none. It is so big because there are so many people who have your back and that’s why I came here.

CF: Can you tie this into what happened on Thursday night? We’ve seen it multiple times now where it looks like a game is over and that you guys are going to lose and then the “magic” happens. How would you define “Hilton Magic?"

Naz: “You just get a feel for it. When you are in that building and the lights just seem a little brighter. The ground starts shaking and you feel like any shot you take is going in. I can name off so many games: The Oklahoma game last year. Oklahoma State during my sophomore year. Iowa this year. Iowa two years ago. Those are just a few. It’s really magically. It really, really is. It’s honestly kind of scary. I truly believe there is something about that place that just wills us to win. It’s the momentum. It’s the fans. When we are down, it gets louder than when we are up. That takes us to that next level. Right now while I’m talking to you, I am literally driving by Hilton right now. There is something about that building that is special but I can’t tell you what it is.”