Even though the days of playing four non-conference games are long gone (television partners will never agree to that in the future), splitting the league up into two divisions would allow Iowa State to miss the powerful southern schools from time-to-time.

Let’s say that hypothetically, the Big 12 eventually adds Boise St. and Cincinnati. Iowa State could replace TCU and Baylor on a given year with those schools. That’s a win.

Schedule wise, this is a much better scenario for the Iowa State’s and Kansas’ of the world.

The Big Ten claims that it isn’t trying to force Big 12 expansion, which I actually believe. The Big Ten’s point (at least my understanding of it) is that it wants everybody to be on as level of a playing field as possible for the College Football Playoff selection committee, again, which I understand and agree with.

I analyze these teams every day on 1460 KXnO. With some leagues playing three non-cons, some playing four, some playing 13 games (championship games) and others playing 12, it does get rather difficult to properly analyze the situation when every league seems to be doing something different.

My gut tells me that the Big 12 will expand at some point but I’m not sure when or to where.

One good source told me two years ago that the league would never go west. We’ll see.

The price has to be right in order for this to occur, which is going to get tricky with all of the cord cutting going on.

During the last round of realignment, television eyeballs were the key factor in adding programs to leagues (this is how Rutgers got into the Big Ten). Eyeballs will still be important but in the next round of realignment, I feel like these schools will get placed based on actual merit and their football brands instead.

I don’t really care what the Big 12 does, I just want it to play offense this time as opposed to simply reacting to everybody else.

As is always the case with this topic, stay tuned.

2 – Perhaps I am over-analyzing this but in one final realignment thought, I am delighted that Oklahoma made this year’s College Football Playoff. My gut tells me that if the Big 12 is going to have problems with one school in the future when it comes to realignment, it’s OU. Rumors of the Big Ten’s eye on Oklahoma have been out there for years. Of course, the Sooners (and others) nearly bolted for the Pac-12 a few years ago. Oklahoma president David Boren is known for publicly stirring the pot.

I feel though that at the end of the day, if OU is making money and having success, they aren’t going anywhere.

This is why when it comes to realignment, I always come back to how the Big 12 needs Texas and Oklahoma to be football powers. Those brands (and egos) are important to the greater whole.

Don’t feel bad about coddling the big boys either. By doing so, it allows Iowa State to cash those checks.

3 – According to this report by Ohio State’s 24/7 site, Paul Rhoads is the current front-runner to replace Chris Ash as Urban Meyer’s defensive coordinator.

Rhoads could not draw up a better post-ISU scenario for his career than this possibility. He would be working with blue chip players and have a chance to win a national championship annually. If Rhoads indeed gets this job, expect him to be a head coach again within three to four years. 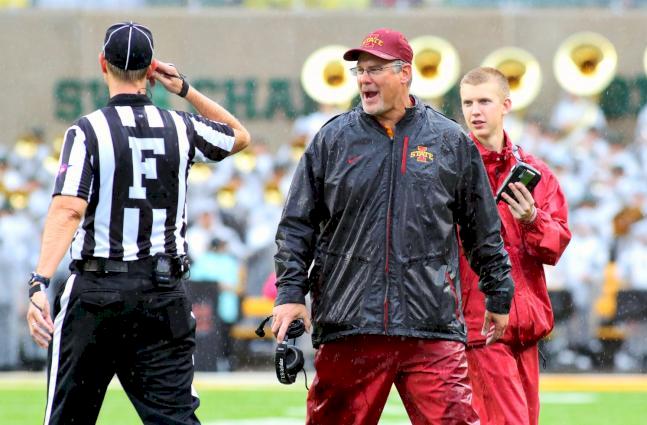 4 – Onto the present staff, in one week, Matt Campbell has proven exactly what I’ve been writing/saying for three years about how social media can hype up a football program.

I’ve had two or three Cyclone fans recently tell me that in the past, they have never followed recruiting but are now excited about it based off of what they have seen on Twitter from the Campbell staff.

But people (especially young ones) are on Twitter and getting the Iowa State brand to as many eyeballs as possible is important. It’s free advertising.

In the year 2015, it’s simply dumb to not use this tool to your advantage.

5 – Campbell’s staff secured an important commitment on Sunday in the form of offensive lineman Oge Udeogu of City College of San Francisco. He’s listed at 6-foot-4, 310-pounds but most importantly, will be in Ames this January for spring ball. When you look at next year’s roster, everything looks pretty solid other than the offensive line.  If the staff can add one or two more JUCO’s to the mix up front, I will be feeling pretty good about 2016.

6 –The Big 12’s bowl lineup is absolutely brutal. Here it is (below) with point spreads as well.

Right now, I’d pick Oklahoma to win and maybe Baylor (depending on its quarterback satiation). TCU has a shot as well. The rest? Woof. You could not draw up a worst slate of matchups for the league in the postseason.

7 – Will Muschamp to South Carolina? Does this not make a lick of sense to anybody else out there? The guy couldn’t win at Florida where he had everything he could ever dream of to succeed. But now he’s expected to turn around the dumpster fire that Steve Spurrier left at SC?

8 – The Cyclones will be tested tonight when Buffalo invades Hilton Coliseum for an 8 p.m. tip (on ESPNU).

The Bulls, who went to the NCAA Tournament under Bobby Hurley last year, had to kick their best player off of the team in the offseason, which has been a major setback so far in 2015. Buffalo is 4-4 and lost to Duke on Saturday by an 82-59 final.

This isn’t a high-major type of opponent by any means, but Buffalo isn’t Arkansas Pine-Bluff either. The Cyclones are 21-point favorites.

If Iowa State wins tonight, Steve Prohm will become the second coach in Iowa State history to begin his tenure with a 7-0 record (Wayne Morgan is the other).

9 – Remember that Colorado team that Iowa State beat to begin the season? The Buffs aren’t half bad. Colorado traveled to Colorado State and beat Larry Eustachy on Sunday. Since losing to Iowa State on Nov. 13, the Buffs have gone 7-0 with road wins at Auburn and CSU.

10 – Thanks to everybody who contributed to our fund honoring the wife of Buffalo coach Nate Oats. Cyclone fans are not only the most loyal in the country, but the most caring and generous as well. Well done.