Before I begin, Merry Christmas everybody.

This is always a fun but hectic week, and I’m sure you all know what I’m talking about. If you’re in an office, you’re there working, but nobody is really working, right?

For those who actually are getting something done, you’ve got like two and a half days to complete a week’s worth of tasks.

After watching my Vikings paste the Bears on Sunday, I re-watched Iowa State’s 81-79 loss to UNI. A few thoughts (and more)…

As Steve Prohm mentioned in his postgame press conference, Iowa State was better than UNI in almost every aspect of the box score. Sure, Iowa State had some blown assignments defensively but especially after seeing it again, UNI hit some big time shots. Washpun and Jesperson were out of this world.

This isn’t to say that Iowa State doesn’t have stuff to work on, because it does.

But if you were approaching the cliff on Saturday night, I think it is safe to back away from it.

I still don’t think that Iowa State is sharing the basketball like it is capable of but we have consistently seen that from this group of guys over the years in the non-con. Remember games like South Carolina last year?

My final takeaway from Saturday: It wasn’t Iowa State’s best outing but against an opponent that played the game of its season (UNI was that good), the Cyclones still had multiple chances to win the game at the end.

That could have been a lot worse. 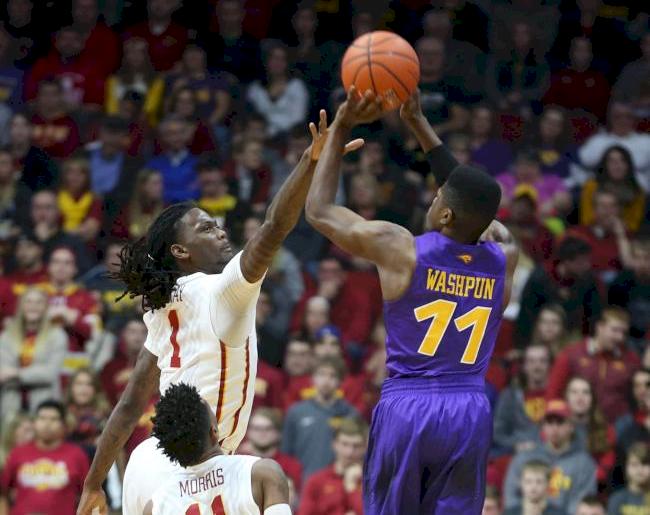 2 – One very subtle positive from my re-watching of that game…I feel like Hallice Cooke might have played his most productive and meaningful minutes of the season. If you look at his box score of 14 minutes, 0-for-1 shooting and zero points, this guy probably won’t stand out but defensively, I thought he was pretty good in the second half. My guess is that he will be praised for it inside the program too. With Naz Mitrou-Long being out for the season, Hallice is a guy Iowa State will need in the thick of the Big 12 season so getting him on the right track defensively right now is important.

3 –What about Deonte Burton’s debut? His seven points in 15 minutes was about what I expected. Defensively, he provides that big body but looked slow out there. That was totally to be expected too considering it’s been how long since the guy has played a competitive game?

4 – I’m glad that Burton will be in a Cyclone uniform during Tuesday night’s game at Cincinnati (6 p.m. on ESPN2).

Over the next 24 hours, we will have a lot more on the site to preview this game but here is Cincinnati for the casual fan in a nutshell.

— The Bearcats are 10-2 overall with their best wins are at VCU (ranked 56th by KenPom) this past weekend and at home against George Washington (ranked 40th by KenPom) on Nov. 28. Cinci’s two losses came to Butler (at home on Dec. 2) and at Xavier on Dec. 12.

— This will be the best defensive team that Iowa State has seen all season. The Bearcats are ranked 12th nationally in defensive efficiency.

6 – Let’s move onto football, where Matt Campbell’s coaching staff might have signed its most important recruit of the winter last week in the form or Rhode Island graduate transfer Tyler Catalina.

My biggest concern with next year’s roster has always been the offensive line.

Catalina should start for the Cyclones when Northern Iowa comes to town on Sept. 3. That’s what those inside the program believe at least.

There are still a handful of questions that need to be worked out with this line but the good news here is that Campbell and his staff are at the very least going to have warm bodies to play with.

7 – Coach Campbell will be on my daily radio show, 1460 KXnO’s “Sports Fanatics” tomorrow at the conclusion of Iowa State’s women’s basketball game. Tune in the traditional way or via the i’Heart Radio App or KXNO.com.

8 – I am one of the few people in this world who does not think there are too many bowl games. Saturday was proof of that.

While covering the Big 4 Classic, I had my Watch ESPN pulled up and took in a fantastic game between Arizona and New Mexico in the New Mexico Bowl. Utah and BYU looked like a blowout early but got very interesting late.

Miami Beach Bowl, you’re up next, and I will be watching.

10 – Way off topic here but if you didn’t get a chance to watch this last night, dude, you have to check it out. It’s quite possibly a top five blunder in live television history. Gotta go. Lots of work to get done on a short week with a BIG basketball game tomorrow night!