Hey, Cy-Hawk week. This should be fun.

The Iowa Hawkeyes enter Hilton Coliseum on Thursday night with a record of 7-2 and they’re currently sporting a ranking of No. 18 on KenPom.com. Their most notable wins are absolute drubbings of Marquette on the road, a VanVleet-less Wichita State in Orlando, and a home overtime win over Florida State.

Meanwhile in Cyclone land, Iowa State has played a somewhat weak schedule thus far and fans are lamenting semi-close games that have mostly ended in routs the last three times out. Which has left me wondering if the order that a large lead is built in varying spurts really matters all that much. I’ve said for the last couple of years that the offense is largely good but usually has one or two spurts per game that decide the game.

The last two iterations of this game have been pretty legendary through Cyclone lenses; one offered up a wild comeback at home in the waning minutes and the other was pure annihilation for an entire half of basketball.

What will happen this time?

(All stats per KenPom.com)

When Iowa has the ball…

Iowa probably has a better offense than you realize.

KenPom.com puts them as the 22nd most efficient scoring offense in the country at 1.13 adjusted points per possession. The formula for their offensive success isn’t all that different than Hoiberg teams of the past, just a slower tempo. They are 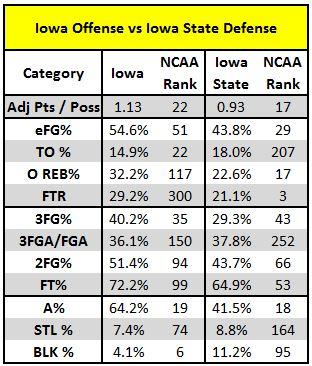 shooting the daylights out of the ball and really avoiding turnovers while neglecting offensive rebounds and rarely getting to the free throw line.

Iowa is shooting over 40 percent from beyond the 3-point line (35th) but one could argue they aren’t hoisting up enough attempts with just 36 percent of their field goal attempts coming from distance (150th).

Perhaps one of the better indicators of a strong offense that is really impressive to me is their assist rate being over 64 percent (19th). All in all, the Iowa offense is very solid, avoids mistakes, and is taking and making good shots.

But for the first time in a while, it appears the Iowa State defense may have something to offer up to combat a strong offensive attack.

The Cyclones have the 17th best scoring defense at 0.93 adjusted points per possession and they are excelling in three of the “Four Factors” to get there as a road map. Most importantly ISU is holding opponents to an effective field goal percentage of just under 44 percent (29th) but they’re also limiting second chances with the 17th best opponent offensive rebounding percentage at 23 percent, and they are once again not sending teams to the free throw line with the third lowest free throw rate in the country.

Teams have been getting 3-point shots off frequently with 38 percent of field goal attempts coming from behind the arc but they have only cashed in on 29 percent of them (43rd). That is a big deal but the more controllable part of shooting defense happens inside the arc and there the Cyclones are holding opponents to 44 percent shooting (66th).

Also worth noting is that the ISU defense has done well to take opponents out of their offense and held their assist rate to under 42 percent (18th).

Another year, another near elite Cyclone offense. Though this year it has been interesting in that there have been days where the defense ranks ahead of the offense.

The Cyclones are scoring 1.13 adjusted points per possession, good for 20th in the country. The method is the same as past years where they are way up the charts in effective field goal percentage and taking care of the ball with the 26th lowest turnover rate in the country. They rarely get to the line and they have mostly been punting on trying to get offensive rebounds, much to my dismay. 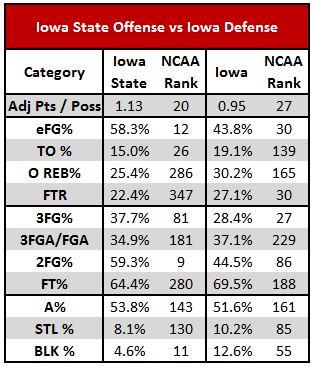 The 3-point shooting has been pretty good up near 38 percent (81st) but perhaps it’s pretty surprising that the Cyclones are just 181st in attempted 3-pointers. Yet again this season the story with the successful ISU offense has been more inside the arc than outside where ISU hits almost 60 percent of their two-point shots.

If there is one concern with the ISU offense it has been its low assist rate just under 54 percent (143rd). Some of that has been how teams have defended Iowa State forcing them to go more isolation for individuals but some of it is also stagnant ball movement at times with slow reversals.

The Hawkeye defense is also pretty tough with the 27th best adjusted scoring efficiency and their success has been built by making opponent shots difficult and keeping them off of the free throw line. There are gaps to exploit with their defensive rebounding and their defense, like Iowa State’s, has allowed opponents to get most 3-point shots they want.

Iowa is a very experienced team though this isn’t their most talented version over the past few seasons. Adam Woodbury, Mike Gesell, Jarrod Uthoff, Peter Jok, and Anthony Clemmons have all had big roles in this game for the past two seasons. And I’m sure they’re still stung over how those games unfolded.

For my money, Jok and Uthoff are the two huge concerns. They are the difference makers on offense, tough to guard, and they can erupt from beyond the 3-point line. Gesell offers up a different set of problems as he can get into the paint at will but sometimes struggles to finish over bigger more athletic guys or consistently find the right pass to make in chaos. He hasn’t taken a ton of 3-point attempts this year but he is a threat to make that shot.

I have been hemming and hawing over how the matchups would look for the Cyclones defensively but Steve Prohm announced this week that Jameel McKay would get Woodbury while Georges Niang would check Uthoff. That leaves Abdel Nader responsible for Jok. Woodbury is not a huge offensive concern other than he absolutely needs to be kept off of the offensive glass.

Honestly, I’d consider sticking Niang on Woodbury and McKay on Uthoff where his length and athletic ability could cause some problems. Though, that would mostly draw him away from the rim. The concern for me with Niang on Uthoff or Nader on Jok is if Iowa puts those guys in situations where they are running off of multiple screens then that will be a tough guard for Nader, but especially Niang.

There is also always the zone option that we have seen just a tiny bit of this season. Or perhaps the more likely scenario involves extended time periods of small ball for ISU that would put Niang on Woodbury, Nader on Uthoff, and Matt Thomas or Hallice Cooke on Jok. That will likely just depend on how guys are playing. There isn’t an obvious plan of attack for the defensive matchups but there are a lot of options.

The flip side of that coin is a big problem for Iowa, though. They don’t have anyone to hang with Georges and Jok will have go guard somebody, likely Nader. Last year, Iowa State was able to exploit him guarding Hogue by posting him up and just backing him down. 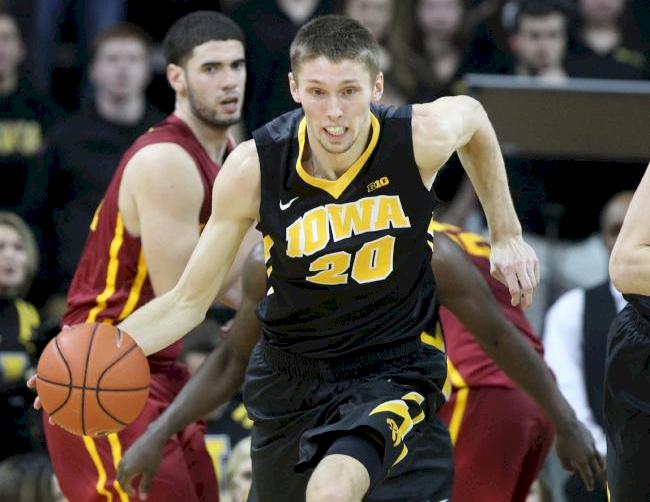 I think Iowa State has the advantage here but Iowa has the ability to hang around and keep it close if they are draining 3-pointers like they are capable. But Iowa has been a bit “boom or bust” from deep where they have made over 42 percent of their 3-pointers in six games and less than 30 percent in the other three. Jok can be a bit streaky so keeping him on ice early will be a huge help.

Monte Morris has to keep Gesell out of the paint even if he isn’t a huge threat to score on his own as Gesell sports an outrageous assist rate of 38.1 percent (26th in the country), for reference, Morris has an assist rate of 31.0. Anthony Clemmons is also an excellent creator that can make some shots that will need to be kept out of the lane off the bounce. Also, McKay can’t roam too much to block shots and get himself out of rebounding position for Woodbury to easily snag offensive boards.

Uthoff will be a battle all night but being physical with him and not letting him get to his little baby hook over his left shoulder near the rim to make him a bit more one dimensional will be key.

Offensively, the Cyclones need to play a bit crisper than they did against Buffalo. Complete that last pass, control the ball on the catch – play quick, not fast. The ball movement was a bit stagnant against Buffalo and didn’t get the defense to shift side to side as much they need to really create a deadly attack.

Converting in the paint against Iowa’s size when the opportunity is there is a must and bombing away a bit from the outside always helps. Nazareth Mitrou-Long I’m looking at you.

My guess is the score will be closer than most would prefer and the Cyclones escape with a seven to nine point win where there is some free throw angst at the end.