Every Monday morning from now until the end of basketball season, I will sit down at my desk and take in one of our nation’s greatest traditions. During this time I will listen to 10 of America’s greatest minds, er, basketball minds, answer every question thrown their way.

Who are these great minds you ask? They are the head coaches of the Big 12 and this great tradition is the Big 12 teleconference.

Every week I’ll take you for a lap around the Big 12 with all the news, notes and flat-out insanity that can come out of this teleconference each week. I won’t always touch on Iowa State because that’s what we do all week long.

With that said, let’s get running. We start in the home of the 11-time defending Big 12 champions.

1 — Kansas head coach Bill Self isn’t a fan of court-storming, and after past experiences for the Jayhawks that’s understandable. There might not be a program in all of college basketball that has fallen victim to the court storm more often than the Jayhawks in the last 10-plus years.

Self was asked about his opinion on court-storms and was also asked to weigh in on the Des Moines Register’s Randy Peterson being injured during the court storm at Hilton Coliseum.

He kicked off his answer by telling a story about an official that broke his wrist during a court-storm in Ames a couple seasons ago, but here’s the rest of what he had to say.

“Even though it appears to be in good fun, but when you have two people that are somewhat seriously injured through this, obviously there needs to be more precautions taken,” Self said. “I’ve said all along I’m fine with it. Just keep it away from the scorers table where the teams are exiting and stuff like this. But the two people that got injured are just innocent bystanders that, I guess, just got stormed. I wish there was some other way to monitor it. Personally, I wish we didn’t do it, but heck we tore down the goal posts here when the Royals won the World Series, so I know kids will do whatever.”

Safe to say Self isn’t a fan, but what the heck, kids will be kids, right?

2 — I need to lead this point off by saying TCU head coach Trent Johnson is one of my favorite human beings on the planet. The man isn’t afraid to say what’s on his mind. This is the same guy that was asked about the plethora of shooters and scorers on his team at Big 12 media day and replied, “Shooters and scorers? I don’t know about that.”

That’s why when he was asked about the Horned Frogs’ new arena and home court advantage, or lack thereof, I had a feeling he was about to drop some good knowledge.

“Well the only home court advantage you’ll probably ever have is if you’re playing a good brand of basketball,” Johnson said. “We’ve got a long ways to go in that regard. It’s just going to be nice to back for the kids to be on campus.”

I sometimes wonder if Johnson really even likes the players he has on his team. I’m not sure I’ve ever heard him give them a compliment.

That was a joke, mostly.

3 — There might not be a team in college basketball that has played more close games than the Oklahoma State Cowboys. Two of their three losses came by five points or less, and seemingly all of their other games were relatively close.

They played another close one when they beat Minnesota 62-60 on Saturday in Sioux Falls which has head coach Travis Ford hoping their luck in close games could be turning.

“It’s always good when you’ve lost two in a row to go get a victory any way you can get it,” Ford said. “Obviously, that was like a road game. I mean, 99.8 percent of the crowd, and it was sold out, was Minnesota fans. So it’s always good to go get a win. We needed a win on the road against a Big 10 team.”

4 —My favorite question from Monday morning’s teleconference was about Christmas wish lists. Baylor’s Scott Drew, Texas Tech’s Tubby Smith and Texas’ Shaka Smart were all asked what their teams want in their stockings during this holiday season.

I know I’d be asking for something like Fallout 4 for my Playstation 4, or maybe a new Fitbit, but these guys had some different stuff in mind. Here’s each of their responses to the question:

Before we get to Drew’s quotes, I have to say he let out one of the heartiest laughs I’ve heard from a coach when he first heard the question. Now here’s his answer:

“Make a shot,” Drew said. “But really, each and every day get better and stay injury free. Coaches will tell you we’re only as good as our players and our football team had a bad string of injuries. I think a lot changes when teams have a key injury, especially if they’re season ending. So that would be first and foremost for me.” 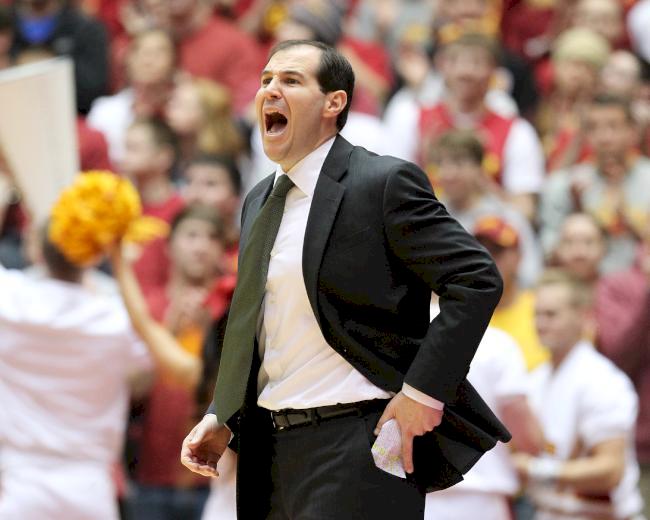 Mid-transcribe I got to thinking of a great blog idea in which I pick presents for each of the Big 12 coaches. Man, I have some good ideas.

Back to the task at hand, here’s what Tubby Smith wants for his Red Raiders this holiday season.

“That they all will stay healthy. That’s what I wish for, that we stay healthy,” Smith said. “Oh, and stay focused. There’s a lot of distractions for young people, especially this time of year with the holidays. We have a lot of young players that probably miss being home so they’ll get to go home for a couple days. It’s just a change, especially for a lot of the new players.”

While staying focused is all fine and dandy, it’s Shaka Smart that gave the best initial answer to the question.

“How many wishes do I get?”

5 —The last point in this week’s lap takes us east to the home of everybody’s favorite grouchy basketball coach, West Virginia’s Bob Huggins.

He seemed particularly grumpy to start this week’s teleconference when he was asked about his relationship with Marshall head coach Dan D’Antoni. After last year’s 69-66 West Virginia win, D’Antoni had some pretty strong words about the Mountaineers and the series between the two schools.

“It’s good for the state. If they back out now, they’re afraid of us,” D’Antoni said. “We’re coming back.”

Huggins was asked if he and D’Antoni have talked at all since that game and if they’d had a chance to resolve things.

This was followed by 15 seconds of complete silence.

I think I’ll love this teleconference too.