Five years ago, I likely would have come on here and written that hiring Matt Campbell from Toledo was the greatest thing to ever happen to Iowa State football.

I have unfortunately developed a bit of a callus over the years, which allows me to look at things more objectively these days.

This is a nice hire for Jamie Pollard and Iowa State.

It is specifically impressive that he was able to sell Campbell on choosing Iowa State over Missouri, if that is really what happened late Saturday night.

I’m not prepared to call this a “home run” or anything like that though because frankly, I don’t know.

Campbell, who has led the Rockets to a 35-15 record since taking over for Tim Beckman at the 2011 Military Bowl, has been great during his time at Toledo. There is no doubt about that. Campbell is a charismatic young football coach who appears to have a very bright future.

But Toledo ain’t Iowa State. There is a lot to learn here.

Let’s weigh what I perceive to be the pros and cons of this hire.

— I think that realistically, this is about as good as Iowa State could have done in the current market to find its next head coach.

As noted above, the fact that Jamie Pollard reportedly wrestled Campbell away from Missouri makes me feel better. It’s just like recruiting prospects to Ames… I don’t really care how many stars a kid has next to his name. I want to know who else wanted him. If it’s Akron and Northern Iowa, I’m generally not that interested.

The fact that a quality SEC program wanted Campbell is a good sign. It’s the opposite of a guy like Tony Alford (who I am incredibly high on for what it’s worth), a long time assistant at big time programs who has yet to receive his big break. Why? You tell me.

— I’m on record stating that I think Iowa State has a team capable of getting back to the postseason next year. The talent is certainly there to do so.

When you consider that, there are two main reasons why this hire makes sense.

1) Campbell has almost a half-decade of head coaching experience. He won’t be learning on the job with a quality team at his disposal.

2) If you’ve done any research on Campbell or watched videos like these, you will notice an understated demeanor that I think will fit very well with Iowa State’s current roster. It’s been well documented how close this team was to Paul Rhoads. Campbell doesn’t appear to be much of a screamer. To the naked eye, there isn’t much ego here. Going from Rhoads to a guy like Bo Pelini would have been a disaster. For the locker room, this transition should be pretty seamless.

— In addition to this being a good fit with the current roster, I think that Campbell will fit in with that “Iowa State culture” that Pollard is always talking about. I do think that he will be well received by the fan base once you guys get to know him. That doesn’t equal wins, obviously, but it might spike ticket sales, which are important too.

— Of all the realistic options that I am aware of, this hire gives Iowa State the best chance to be good next year. 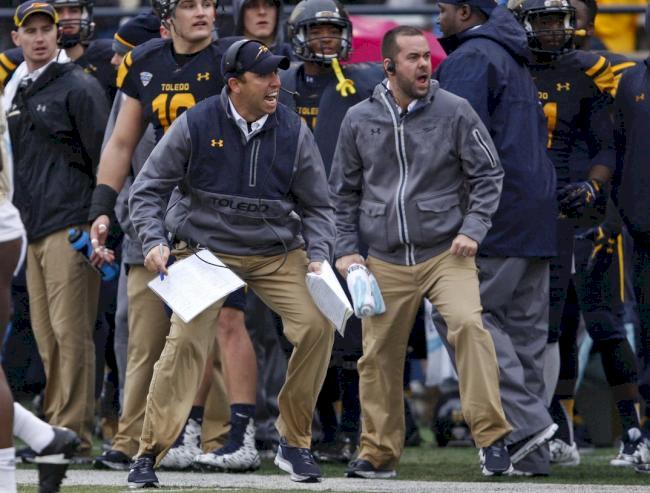 — The big reason I was high on a guy like Western Michigan’s P.J. Fleck was because I think he could have done some major damage on the recruiting trail at a Big 12 school like Iowa State. The proof is there that he can recruit: Fleck’s current class as Western Michigan is ranked 35 spots higher than Iowa State’s (for the record, Toledo’s is ranked higher too) according to Rivals.com.

Campbell is big in Ohio and Pennsylvania, which isn’t exactly Big 12 country.

I’m totally fine with Iowa State heavily recruiting the Midwest if you are going to play a style of football that makes sense with it. But when you play in the Big 12 (and almost half the teams in the league are from Texas), you simply have to recruit Texas too.

Hiring the right staff is going to be critical (which I’ll get to momentarily) for this to work.

— It’s the same story as when Iowa State hired Steve Prohm from Murray State (and we are still waiting to see how that is going to turn out). Both of these guys are coming from the best job in a mid-major league and transitioning to an incredibly challenging job in the Big 12. Both men inherited those great jobs at Murray State and Toledo.

This type of hire always scares me.

The fact that they come from winning cultures and have head coaching experience is great.

But name a Toledo coach that has failed over the last 20 years? Everybody wins there. The same can be said for Murray State.

I’m not saying that he can’t do well at Iowa State, but life is about to get real for Matt Campbell. I trust that he is ready to embrace the challenges of the Big 12.

I’m obsessed with the type of coaching staff that Campbell is going to put together at Iowa State.

He needs ties with Iowa high schools. As I noted last week, bringing a guy like Tom Wilson (Dowling) or Gary Swensen (Valley) on board would be smart. Current Rhoads development staffer Mitchell Moore could provide the same benefit.

Based off of the fact that he came from Campbell’s staff at Toledo, I guess we all can assume that Louis Ayeni will stay on board? That’s big for the sake of recruiting and staff continuity. He has been one of the more impressive members of the Rhoads staff for the last two years.

My assumption is that Iowa State will formally announce the hiring today and a press conference will occur on Monday.

This will surely make for an exciting couple of days!