Full of turkey? Our picks are usually full of — never mind.

Anyway, it’s been a strange week for Cyclone fans, right? Crazy collapse and a coaching search firing up. Kind of a bitter deal for Iowa State fans everywhere but he gets one last swan song in Morgantown, West Virginia.

Here’s the updated standings where Brent Blum is starting to run away from the pack. 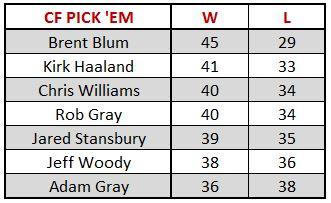 Ohio State @ Michigan (PK) – Well maybe anger will actually wake up the Buckeyes. Nothing else has. Ohio State 27 Michigan 17

Iowa (-1) @ Nebraska – My stance on Iowa the last few years has been indifference but I certainly don’t need them winning a National Title. A win in Lincoln makes that a real possibility. But, I think Iowa comes away with one though Nebraska is better than their record (ironically, Iowa is probably worse than theirs).

Ohio State @ Michigan (PK) – Harbaugh is like the younger Wizard of Manhattan, sort of. I’ll take him.

Iowa State @ West Virginia (-14) – Iowa State covers and I’d love for them to win another one for Rhoads though that would bring some doubt into some minds, I’m sure. But West Virginia gets the win.

Notre Dame @ Stanford (-3) – Notre Dame is overrated. Give me the trees.

Iowa (-1) @ Nebraska – What the heck. Give me the Hawks and that Daniels dude, barely.

Iowa State @ West Virginia (-14) – Paul Rhoads is such a class guy, it would be untoward to bet against him. So I won’t — especially in this case. Clones hang and maybe win.

Iowa (-1) @ Nebraska – This is a match up I’ve had circled on my calendar for quite some time. I’ll be in the stands for this one, and that bodes well for the Huskers. Since I’ve been in college, Nebraska is 10-1 in games I was at. 11-1 will be a common theme on Black Friday. GBR.

Ohio State @ Michigan (PK) – Have the wheels fallen off the OSU wagon? I think so. Go Blue.

Notre Dame @ Stanford (-3) – Stanford has been overrated all season long. Give me the Irish.

Iowa State @ West Virginia (-14) – Cyclones make a late comeback and give us one last Paul Rhoads memory. Cyclones by a point.

Iowa (-1) @ Nebraska – I think the Hawks squeak by a much better than average Husker team in Lincoln.

Notre Dame @ Stanford (-3) – Cards. Again, I love me some Cardinal football. This is more of an enjoyment pick. Also it’s way better for the Big XII if Notre Dame loses.

Oklahoma (-6.5) @ Oklahoma State – OSU. OU is in a class of its own in the conference right now, but it’s a rivalry game and crazy stuff happens.

Baylor (-1.5) @ TCU – TCU. You’ll have to saw Trevone Boykins foot off for him not to play, and any game Trevone Boykin plays is a game I believe TCU wins.

Iowa State @ West Virginia (-14) – ISU outright. There is far too much emotion for this game not to go ISU’s way.

Ohio State @ Michigan (PK) – Michigan, to me, has looked like the better team all year.  With that said, Urban Meyer just lost his first regular season Big 10 game as coach of OSU.  He was 30-0 before that.  30-0!  I can’t see him losing 2 straight.  Give me the Buckeyes.

Notre Dame @ Stanford (-3) – ND has been living on the edge the last couple weeks.  All the injuries catch up to them and Stanford wins by 6.

Iowa State @ West Virginia (-14) – Cyclones win it for Rhoads.  Thanks for everything Paul!