Brent Blum has vaulted to the top of the standings over the last few weeks as I have slid back to the middle of the pack, where everyone else resides. Except for Adam Gray, he’s at the bottom of the pile. 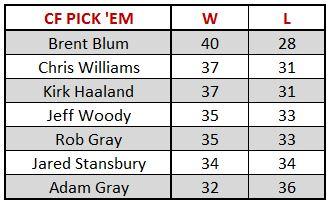 Iowa State @ Kansas State (-6) – Bill Snyder in a desperate spot gives me the willies. Never back the Vampire into a corner. K-State 34 Iowa State 24

Michigan State @ Ohio State (-13.5) – I feel like Vegas is daring me to take Michigan State here. Feels like a trap, so give me the Buckeyes who will show up and play up to the level of their competition.

USC @ Oregon (-4) – Game is in Eugene and the Ducks are vastly improved compared to early in the season. I really like Oregon here.

Baylor @ Oklahoma State (PICK) – Baylor is a different animal on the road. The freshman quarterback is dinged up.

Baylor @ Oklahoma State (PICK) – I don’t have a lot of confidence in Baylor of late but I also saw Okie State struggle last week in Ames. I’ll take the Pokes mainly because I’m hoping for an epic Bedlam game with OU (and the OSU fans behind me last week were pretty decent).

Iowa State @ Kansas State (-6) – If Iowa State can respond and finish out the season like they care, I like their chances. I don’t know the mindset of the team but they seem to still have some fight in them. I think they cover, but will Paul Rhoads finally get a win over Snyder? Iowa State ruined his first farewell game at home in 2004, and they haven’t won there since. Can they do it again?

USC @ Oregon (-4) – Quack. If it weren’t for those early (bad) losses, we would be talking about the Ducks as a playoff team. They’re playing as well as anyone in the country. Credit to Mark Helfrich getting them back on track.

Iowa State @ Kansas State (-6) – I think the Cyclones get this one outright. They can finally fight fire with fire with the Vampire. They won’t get blown out in time of possession, and they won’t get beaten athletically by anyone. I like the matchup for the Clones!

LSU @ Ole Miss (-4) – Since CW will be in Oxford sporting a freaking bow tie and cheering for the Rebels (per a source), I’ll go with LSU to win outright.

Michigan (-4) @ Penn State –  Good old-fashioned slobberknocker between two of the best defense in the country. I’ll go with Harbaugh to cover.

LSU @ Ole Miss (-4) – Tigers get back on track on the road and Fournette has a big game. LSU wins.

Michigan (-4) @ Penn State –  I know this is in Happy Valley but I don’t see this game being close. Wolverines roll.

USC @ Oregon (-4) – QUACK. QUACK. QUACK. Autzen will be rocking and not many opposing teams win when Autzen is rocking. Ducks win and cover.

Iowa State @ Kansas State (-6) – It’s been a while since I picked Iowa State, so I’ll go ahead and do that here. The offense rolls, the defense comes up with key stops and the Cyclones get one step closer to four Big 12 wins.

Michigan State @ Ohio State (-13.5) – It was about this time last year that the Buckeyes started beating the hell out of most teams.  I think they make their first statement of the year and win by.

Michigan (-4) @ Penn State –  Michigan’s defensive front gets after Hackenberg all day.  Wolverines by 13.

USC @ Oregon (-4) – Is Oregon back?  Probably not, but they are still good enough to win a home game against a roller coaster USC team.  Ducks by 10.

Baylor @ Oklahoma State (PICK) – OSU is a fraud.  Baylor exposes them and wins by 24.

Iowa State @ Kansas State (-6) – I have no clue how this Iowa State team will respond after last weeks heartbreaking loss.  They’ve shown to be a resilient team so far.  I’ll go with my heart on this pick. CPR gets over the hump, beats Snyder for the first time, and goes into the last game with a chance to get to 4 conference wins.