The Cyclones had a rough Saturday in Norman and most of our pickers had a rougher weekend with their picks. But, never fear. We’re back to give you more shoddy analysis and picks that should not be trusted with real or fake money. 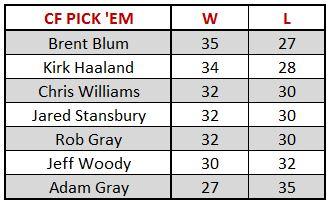 Oregon @ Stanford (-9.5) – This feels like the first relevant Pac 12 game all year. Good for them. Oregon has been playing much better of late. Stanford 31 Oregon 24.

Oklahoma @ Baylor (-3) – This is going to be fantastic. From what I’ve seen, Oklahoma has more balance, but OU in a big spot is nerve-wracking. I’ll take Baylor with some weirdness happening. Baylor 37 Oklahoma 31.

Kansas State @ Texas Tech (-5-5) – This matchup is really, really even but I’ll take the Red Raiders to cover at home.

Oklahoma @ Baylor (-3) – I feel like I always pick Oklahoma but I think they’re the best team in the league right now and prove it in Waco.

Iowa State vs. Oklahoma State (-14) – The scene is familiar, for sure. There’s been ups and downs with how these Cyclones have performed and while I want to pick with my heart to say that they’ll at least cover, my brain says, "Cowboys".

Oregon @ Stanford (-9.5) – History says take Stanford at home but I feel like this Oregon team is finally coming to life. I’ll foolishly take the Ducks and the points.

Memphis @ Houston (-6.5) – I don’t know…Memphis’ offense is really good but I love Tom Herman and Houston. On last night’s radio show I took Memphis but when it comes down to putting it on paper, I’ve changed my mind. Give me the fighting Herman’s by a touchdown.

Texas @ West Virginia (-8.5) – For Iowa State’s sake, I hope Texas wins this game for multiple reasons. I’m just not sure I see it happening though. I guess I’ll take WVU. I guess.

Oklahoma @ Baylor (-3) – I just think that Oklahoma is the better team here. I’ll take the Sooners and the points.

Iowa State vs. Oklahoma State (-14) – I’ve been dead wrong on Iowa State the last couple of weeks. Hopefully that isn’t the case on Saturday because I’m picking the Cyclones to have some success on the ground and cover here.

Oregon @ Stanford (-9.5) – There are few teams that have been able to consistently matchup well with Oregon like Stanford has the past few seasons. Early in the week I liked the Ducks, but now I’m back pedaling. Cardinal cover.

Oklahoma @ Baylor (-3) – I’m calling for a push when the Bears win on a field goal as time expires.

Iowa State vs. Oklahoma State (-14) –  I think the Cyclones will stay close for three quarters, but OSU runs away to a cover in the fourth.

Oregon @ Stanford (-9.5) – Condoleezza Rice is probably thinking Cardinal (homer). I am not. Ducks.

Kansas State @ Texas Tech (-5-5) – Vampire’s been a chameleon. Can there be a vampire chameleon? I reckon so. Cats.

Oregon @ Stanford (-9.5) – Cardinal. It’s in Palo Alto. I know the Ducks have been playing better, but I wouldn’t say I’d be comfortable saying they can make this close against the Nerds.

Memphis @ Houston (-6.5) – Tigers. I sooooooo wish Memphis would’ve been undefeated for this one, because Herman would be hosting gameday in his first year there. But Memphis had to go and lose, so this game loses some luster. What’s crazy is that people have now forgotten how good Memphis actually is. I expect Houston to win because of sheer firepower, but Memphis keeps this very close.

Texas @ West Virginia (-8.5) – I honestly don’t know how Texas manages to get above 17 points. That’s not an endorsement of WVU’s defense, it’s a knock to the Horns. WVU will definitely slow down the run, and the weather will probably not be conducive to throwing, where they’re already inept.

Oklahoma @ Baylor (-3) – I am going to break my number two rule. First, never trust a man with two first names, second, never bet against Baylor in Waco. For some reason, I feel like OU wins this one and throws themselves into the top 6 for the playoff rankings.

Oregon @ Stanford (-9.5) – Oregon seems to be getting back on track. They keep this game close.

Texas @ West Virginia (-8.5) – Hardest game of the week to pick. I’ll take WVU and hate myself for doing it.

Oklahoma @ Baylor (-3) – OU has looked great in games that weren’t "big" games. In their two big games they’ve looked awful. Give me Baylor.

Iowa State vs. Oklahoma State (-14) – I liked ISU a lot in this game 2 weeks ago.  After what we saw in Norman, and what OSU did to TCU in Stillwater, it’s easy to think this could be a route.  I’m sticking with my initial reaction and think OSU is a good matchup for Iowa State.  I think this game is close throughout the 4th qtr, only to have OSU win, ISU cover, 33-24.