What has been the bigger story in the past week; Iowa State shutting out Texas in Ames or the first reveal of the College Football Playoff "Rankings"? Okay, fine, it wasn’t the game in Ames though that was a lot of fun

Playoff implications abound this week with three big games that are all on our slate to pick. Clemson looks to stay unbeaten, LSU and Alabama meet head to head to start sorting out the SEC (West) and undefeated TCU travels to Stillwater to take on undefeated Oklahoma State.

Check out the picks for this week, here are the current standings: 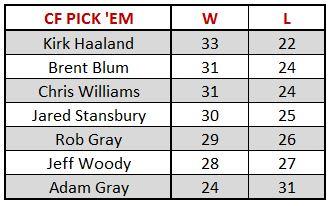 Iowa (-7) @ Indiana – With a hobbled Beathard I think Indiana covers, but will Iowa lose their first game? Indiana may be the toughest test left but I’d bet on the Hawks eeking it out.

Florida State @ Clemson (-12) – Dabo redefines "Clemsoning" this week. This spread isn’t too big for the Tigers.

LSU @ Alabama (-6.5) – I think the rushing matchup in this game with LSU’s offense and Alabama’s defense is exquisite! I’m inclined to take LSU to cover and lose but I think Bama tacks on a late score to cover.

TCU (-5) @ Oklahoma State – Oklahoma State is pretty strong in power ratings making it appear that they could cover this spread but I think it’s more likely that TCU wins by at least a touchdown. Frogs.

There’s plenty more where that came from, too. The good news is those games have nothing to do with this one. Winning in Norman seems unlikely but if Iowa State can continue to run the ball they will have a good chance to cover, barring huge mistakes. Cyclones.

Baylor (-18.5) @ Kansas State – My theory on Baylor and its new QB: Against bad teams, you won’t be able to tell. Kansas State, in my opinion, is a bad team this year. Baylor will roll tonight but struggle when the teeth of its schedule comes to life next week. Bears by three touchdowns.

Texas Tech @ West Virginia (-8) – The toughest game of the week to pick in my opinion…I wouldn’t touch this with Blum’s money. Tech is a different animal away from Lubbock and West Virginia is good at home. I guess I’ll take the Mountaineers but I don’t feel good about it.

Iowa (-7) @ Indiana – C.J. Beathard’s injuries have to be a concern for Iowa here. Hoosiers keep it close and might win.

Florida State @ Clemson (-12) – I really like Clemson to win the game (they are for real) but I’m not willing to say it will be by two touchdowns. Give me the Noles and the points.

Iowa State @ Oklahoma (-25.5) – I’m all in on Iowa State’s new offense. The Cyclones won’t win but will keep it within three touchdowns against what I feel is the best team the Big 12 has to offer.

Baylor (-18.5) @ Kansas State – In case you didn’t know, Jarrett Stidham was the No. 2 dual-threat quarterback in the class of 2015. The Bears are going to be just fine without Seth Russell. Baylor rolls to a cover.

Florida State @ Clemson (-12) – I’m all in on the Tigers bandwagon, but this game won’t be decided by more than two touchdowns. Clemson stays undefeated but the Seminoles cover.

LSU @ Alabama (-6.5) – I’m sure the Crimson Tide would love to put the kibosh on the Fournette for Heisman campaign, but that’s not happening. Fournette runs wild, again, and the Bayou Bengals stay undefeated.

TCU (-5) @ Oklahoma State – I have a feeling OSU is going to end up with, at least, two losses. This game will be the first one. Trevone Boykin makes a late play to seal a win and cover for the Frogs.

Iowa State @ Oklahoma (-25.5) – Iowa State hasn’t scored more than 20 points in Norman since their last win there in 1990. That’s 51 points in eight games. That streak ends this week as Lanning and co. are able to move the football, but the defense struggles with OU’s high powered attack. Sooners win, but I see the Cyclones staying within three scores.

Baylor (-18.5) @ Kansas State – It’s become eerily wise to pick against the vampire, and I can’t imagine him conjuring anything that will slow down the Bears much. Wildcats are wobbly now and too beat up on offense to hang in there. Baylor covers.

Texas Tech @ West Virginia (-8) – Now this should make for some good, old-fashioned Big 12 football. Expect a combined 100-plus — and a great game for everyone who loves unbound offenses. Mahomes makes one extra play, Red Raiders stay within a touchdown and possibly even pull out the win.

Iowa (-7) @ Indiana – Heck, who knows? The Hoosiers were right there with Michigan State a couple of weeks ago in the fourth quarter before falling apart. How healthy is C.J. Beathard? Lots of questions — bot at least one certainty: Iowa can and will run the ball. I expect a cover, but not by much.

Florida State @ Clemson (-12) – Deshaun Watson and company at Clemson pounded Miami a couple weeks ago and Al Golden finally lost his job. Tigers continue their run through the sunshine state by flattening FSU and covering.

LSU @ Alabama (-6.5) – Leonard Fournette or Derrick Henry? He who runs best, wins this mammoth SEC battle. Both are already 1,000-yard rushers, but on this day, Henry gets my vote, despite Fournette having even gaudier stats. Plus I like to think of the havoc having three teams at 4-1 tied atop the SEC West would create. Tide covers.

TCU (-5) @ Oklahoma State – Healthier Horned Frogs have slowly but surely regained some mojo on the defensive side of the ball. Cowboys can’t stop anyone, let alone Trevone Boykin, who will round up massive numbers both through the air and on the ground. TCU covers.

Iowa State @ Oklahoma (-25.5) – There’s something about this Cyclones team right now … Yes, Texas was so one-dimensional that selling out and stopping the run proved less problematic than expected. Still, a shutout’s a shutout. And Joel Lanning just may take out a Sooners safety or two. I think ISU finds a way to hang in this one and will certainly prevent an OU cover.

Baylor (-18.5) @ Kansas State – Bears. I wanna say that Kansas State can keep this close, but since the TCU game, there hasn’t been any reason to believe that. I wouldn’t be surprised if they did, but I don’t think it happens. They just don’t have enough offensive consistency, and the defense is suffering from Cyclone Syndrome (being on the field the whole damn game).

Texas Tech @ West Virginia (-8) – TTU. I think Toddrick Gotcher has a very solid game despite the pressure that Huggins’ team applies. Tubby Smith has his guys rolling, but WVU pulls out a close one where free throws are important. WVU 68-63. Oh wait, this is football? Yea, I’ll take the same score.

Iowa (-7) @ Indiana – Hoosiers. I think we finally have to admit that the Hawks are pretty good. However, this test is a significant bit harder than people are going to give credit to. Howard at runningback is a stud, and no team has won by more than 7 points in Bloomington.

Florida State @ Clemson (-12) – Seminoles. This game has way too much riding on it to be a two-touchdown win.

LSU @ Alabama (-6.5) – Geaux Tigers. I don’t think Bama deserves to be in the Playoff. This is more of an emotion pick than a reason pick.

TCU (-5) @ Oklahoma State – Frogs. That defense is starting to come together, and that is reeeeeally scary for the other teams in the league. Mix that with the best player in college football (sorry, Fournette) and you have a deadly combination. Nothing against the Pokes, but this machine is just getting started.

Iowa State @ Oklahoma (-25.5) – Despite what history says, I LOVE Iowa State to cover. This offense will keep you in every game that you may be playing in. It’s like blowing out Collin Klein’s hayday at KSU. A "blowout" was 17 points, because math says you only have so much time to score. I also love where this team is at. Look for this game to be a shock to the Sooners. Am I saying they are going to win? No. Am I saying they could make OU nervous? Absolutely.

Baylor (-18.5) @ Kansas State – True freshmen QB getting his first start on the road against Bill Snyder?  I don’t care how down KSU is, that’s a rough start.  I like Baylor to hold on for the win but KSU to cover.

Iowa (-7) @ Indiana –  Indiana will be the best offense Iowa has faced this year.  That doesn’t say a whole lot about the offenses Iowa has faced.  I’ll take Indiana to win outright.

Florida State @ Clemson (-12) – I keep waiting for the Clemson choke we are use to. I’ll say that not only does FSU cover, but they win.