AMES — The details are a little bit fuzzy but in honor of Iowa State’s 24-0 pasting of Texas on Saturday night, I’ve got a fun Joel Lanning story for you guys.

Some of you might have heard it by now. Most probably have not.

Grab some hot cocoa. Spike it if you wish (assuming you’re over the age of 21, of course). Curl up and sit around the fire while Uncle Chris tells a tale that took place during one of Lanning’s first spring ball sessions as a freshman at Iowa State.

While sporting his green “no contact” quarterback jersey, this highly touted rookie out of Ankeny threw an interception down what I’m told was the right side of the field. (It’s important to note here that during spring ball, quarterbacks aren’t supposed to participate in contract drills, yet alone live football.)

Lanning surveyed the backlash of his mistake while a certain defensive back (the name slips my mind), reversed field with a little extra pep in his step. Lanning, who finished third in the class 3A state wrestling as a senior in high school, didn’t appreciate the antics. He didn’t hang his head and walk to the sideline either. As the story goes, No. 7 either forgot about or more likely, didn’t give a damn about the green jersey on his back.

Lanning, a guy who most thought would eventually end up at linebacker (Nebraska offered him as a safety), finished the play with authority. Without permission, Lanning made the tackle — a big tackle — on this Cyclone defensive back.

The point of that story is to paint the proper picture of how Joel Lanning approaches the game of football.

This again was evident a handful of times in the homecoming win over Texas, but specifically on Iowa State’s first scoring drive of the game. It was 3rd and 10 on the ISU 34 with just under 12 minutes to play in the quarter. Lanning scrambled on what should have been about an 8-yard gain. He lowered his shoulder, got 10 and eventually led the Cyclones into the end zone.

Those little yards and little things. That badass mentality.

How about when Lanning ran over that Texas safety in the second half? Yikes.

From my seat, that’s what makes Joel Lanning so valuable to this Iowa State football team that appears to have found an edge.

Unlike Iowa State’s defense, Joel Lanning was far from perfect but that’s okay. As a starting quarterback in the Big 12, the local kid is 1-0 and right now, that’s absolutely good enough. 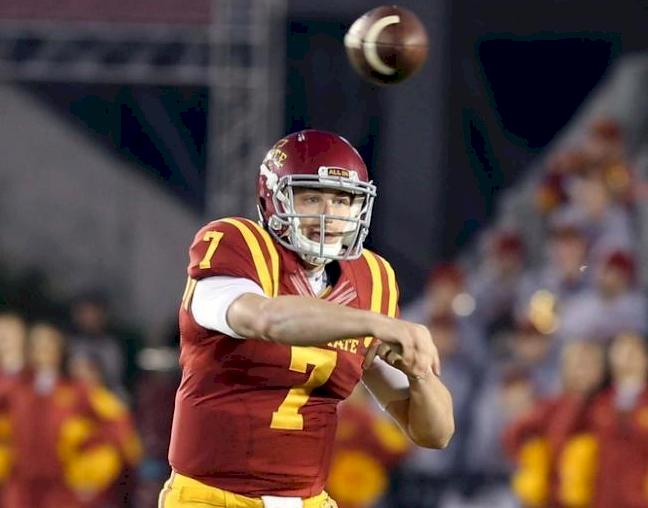 1 – I will get to the defense, but just a little bit more on Lanning. He feels pressure so well for a young guy. That’s in the pocket and in general. I mean, how cool was Lanning in his first career start – against Texas – just five days after his offensive coordinator had been fired?

2 – Here are some major stats that prove the utter domination in this game: Iowa State’s 28 first downs to 11 for Texas. The Cyclones were 15-of-24 on third down while the Longhorns went 2-of-13. Iowa State ran 92 plays to Texas’s 54 and possessed the ball for 15 more minutes.

3 – Texas’s 119 rushing yards fell 87 yards shy of its average on the year. This also marked the first time that the Longhorns have been shut out by an unranked opponent since 1961.

4 – Speaking of rushing the football, how about some additional props for Mike Warren? Warren’s 157 yards vs. Texas marked his fifth 100-yard game in six starts. Warren has run for 150-yards or more three times this season, the first Cyclone to do that since the great Ennis Haywood back in 2001.

5 – That’s the blueprint, folks. That Big Ten style of football that we all witnessed on Saturday night is the recipe for this team to compete in the Big 12. Enough trying to fight fire with fire. It isn’t possible here. As John Walters put it, “We just Bill Snydered Texas.”

That will be a major talking point leading up to Iowa State’s 6 p.m. kick at Oklahoma next Saturday night.