AMES – You’re rightfully jazzed up about the 2015-16 Iowa State men’s basketball season. Preseason magazines are out. Any analyst with a brain has first-year coach Steve Prohm and the Cyclones in his/her top-10.

Junior Monte Morris might be the best point guard in the country.

You guys do realize though that there is another Iowa State senior though, right?

His name is Abdel Nader and I can come up with at least three games (at West Virginia, Kansas State and Kansas in the Big 12 Tournament Championship) that Fred Hoiberg’s Cyclones wouldn’t have won last year had the Northern Illinois transfer not provided essential minutes off of the bench.

Still, Nader’s junior season fell short of his individual expectations. It all began with an unfortunate run-in with the law during the offseason. Rumors surfaced in the summer months questioning if he would even be on the team at the start of the season.

According to Prohm, the Abdel Nader he has worked with at Iowa State is a different cat.

“I met with the seniors and I met with my staff and said, ‘He is probably the most consistent guy we have had since I’ve got here,’” Prohm said. “The stories I have heard about Dooley (that’s what Prohm calls him) last fall at this time and what I’m coaching right now I think are two different men.”

That’s both interesting and encouraging for a program hoping to play in its first Final Four since 1944.

The transition of Abdel Nader began off of the court. First of all, he’s down about 20 pounds compared to the guy who suited up for the third-seeded Cyclones in a disappointing loss to UAB, the 14-seed (sorry for the reminder) last March. It’s the little things that others around the program are noticing.

“Like deciding to stay home instead of coming to the gym,” Mitrou-Long said. “For the past year and a half, Abdel has been in the gym every single day. Like when we went to the hospital recently he took more time to hang out with a kid. He said to the whole team that he wants to be a better man and he’s probably the biggest guy that I am proud of. Abdel has done a great job of growing as a person.” 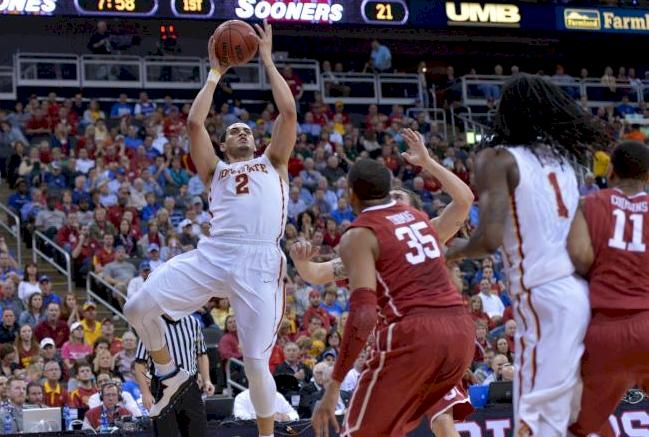 For the first time in his career, Abdel Nader’s mind is right. He is a happier man off the court and as a result, the Cyclones are hoping that it positively impacts him on it.

Nader averaged 5.8 points per game as a junior while playing just over 16 minutes a contest. However when Nader saw at least 20 minutes games last season, he averaged 11.2 points and 5.3 rebounds. Iowa State notably went 8-1 in those games.

“Last year I would come in if someone was playing bad or if someone got hurt,” Nader said. “I felt like I needed to pick up the slack of some other guys, especially on the road. It’s easy to play great at Hilton with the fans behind us.”

For the most part however, none of Nader’s trademark games came at home.

“I love that stuff (being on the road)," he said. "I live for it. I don’t think that Hilton’s rims like me very much.”

Nader’s junior season was highlighted by 19-point outbursts in road victories at Iowa and West Virginia. As Mitrou-Long pointed out, the Cyclones likely wouldn’t have beaten Kansas without Nader in the Big 12 Tournament championship.

“Without him in the Big 12 Tournament, we don’t win,” Mitrou-Long said. “He had a huge game vs. Kansas. He’s focused. He’s watching film. He’s been coming over with me and Georges and talking about plays and positions and where he can be at.”

The expectations surrounding Iowa State basketball are currently at an intensified level. If one were to name all of the characteristics that are needed for a championship basketball team, the Cyclones have most of them.

But come March, great teams have depth. Great teams always have a guy who when everybody is down, can somehow pick his crew up. Last year in some brutal venues, Abdel Nader was able to be that guy for Iowa State.

“I have a different kind of mindset,” Nader said. “I’m just mentally in a better place.”

Compared to last year, come Final Four time, hopefully the Cyclones will be too.