I had the privilege of going back to Iowa State this past weekend to celebrate a great accomplishment by a bunch of good men.

It had been 15 years since the 2000 Iowa State football team won its first bowl game in over 100 years of playing the sport. This team also still holds Iowa State’s all-time wins record at nine. A lot of coaches get fired for consistently winning nine games. That is why OUR nine so special.

There wasn’t much hope at Iowa State when Dan McCarney showed up in 1995. The facilities, to say the least, were noncompetitive. There was very little tradition. Iowa State hadn’t played in a bowl game in over 20 years. But Coach Mac fed us a dream and he recruited athletes that were hungry. It took six years and five losing seasons before his dream came to fruition.

This group of men worked harder and were more dedicated to the idea of team than any "team" I played with during my 12 NFL seasons. Led by a talented and dedicated group of seniors, we capped off the dream season with a win in the Insight.com Bowl in front of roughly 30,000 Cyclone Fans. Four days later, I left for New Orleans to start training for the NFL. My life went in one direction and, for majority of these men, their life went out into the real world.

Over the weekend, I had a chance to discuss family, children, work, football, and the experience of being a student-athlete at Iowa State University. While Iowa State was leading third-ranked TCU at the end of the first quarter, this group got together on the field (see below) for the first time since 2000. It was a moment that I won’t soon forget. We had CPAs, financial advisors, veterinarians, engineers, and farmers in the group. They are men that aren’t afraid of a hard days work. One teammate does welding for the railroads to support his family. Some work for fortune 500 companies and a few have their own businesses. Many have stayed close to Ames and some moved far away. Most never put on the pads again and a few were lucky to play longer. 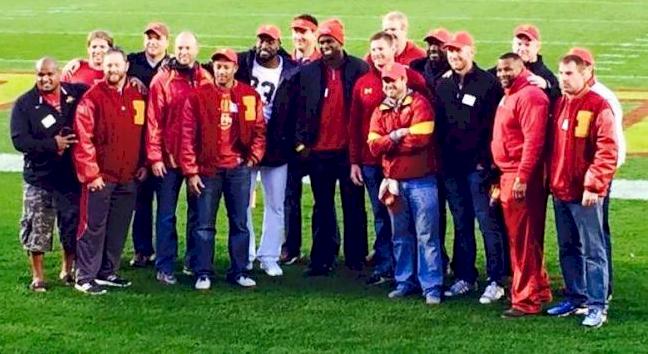 That was a special team, and not just because we won games. We learned about dedicating yourself to the team cause. That you can deal with adversity. You can make mistakes in life and pick yourself back up. We lost a lot of games my first four years at Iowa State. Despite that, our team was still dedicated to our coaching staff and to each other. We believed we would go to a bowl game our senior year. We never gave up. We always thought it was possible. That team made sacrifices for each other. Individualism was set aside. The only thing that mattered was a bowl game.

When you come back home after not being there for 15 years and you see the changes that have occurred around Cyclone football, it’s pretty dang exciting. I know the team has struggled the last couple years, but the fact we are still getting 52,000 fans proved to me that WE will get this thing back on track. It is well within our reach. The fan support and the power of Cyclone Nation has grown at a staggering rate since 2000. The facilities are top notch and impressive enough to lure any recruit. I see Iowa State Cyclone gear everywhere I travel. People are proud of our school, our campus, and they love our teams. The loyal fan support is outstanding. That is what excites me about this Iowa State program.

It may not be this year and it may not be next year, but at some point we will turn this thing around. Either way, I know we will cherish every win and stay faithful after every loss. We know our sports teams are never perfect. But as good old-fashioned midwesterners, we love teams that play hard and with passion.
Whichever the sport, boys or girls, I hope that our student-athletes turn out like a lot of these men from 2000. In sports, they can give trophies for the wins. But you get remembered for the way you played and how that feeling impacted each fan.