So I’m not redundant, CLICK HERE to read my initial thoughts on Iowa State’s 45-21 loss to TCU on Saturday night.

1) This is such a hypocritical thing for me to write but the worst part about Saturday night was the tease. During that first quarter, it really did feel like something magical was in the air. The crowd was engaged. The players were reacting to the crowd. Paul Rhoads and his staff were coaching like their hair was on fire.

Having written that, for me to complain about watching competitive football is ridiculous.

I think you guys know what I mean though. For a few minutes, the Cyclone Nation had reason to believe again. That was kind of fun.

2) This leads me to what my friend Adam Gray talked about on our podcast last Thursday – the topic of Iowa State letting fans leave the stadium at halftime.

I’m not in a position where I will ever tell fans how to act. It’s an entertainment choice. You all are choosing to spend your Saturday’s in the fall at Jack Trice Stadium. If you want to go chug a couple of cold beers at the half, I’m not going to judge that.

But twice now this season (Iowa and TCU), Iowa State’s players have walked out to a half-empty Jack Trice Stadium to start the second half when in my opinion, that place should have been going bonkers.

To start the second half against Iowa and on Saturday night, that atmosphere was absolutely dead.

Having said that, it isn’t the reason why Iowa State is losing football games.

3) Paul Rhoads’ weekly press conference is scheduled to start at 11:30 today. I’m genuinely curious to see what comes from his staff’s “Sunday analysis” as to why Joel Lanning did not play after throwing a 74-yard touchdown pass to Allen Lazard in the first quarter.

4) And for the record, I’m not willing to die on the “Lanning will be the savior of Iowa State’s offensive problems” hill. I like the combo look of him and Sam. But for the life of me, I cannot understand why you would choose to play a guy, watch him throw a 74-yard touchdown pass and then bench him the rest of the game.

And if you guys have read my work for a while, you should know that I’m usually the last guy to start calling dudes out because I realize that the guys on Iowa State’s coaching staff have forgotten more about the sport than I will ever know.

I just cannot comprehend why the staff used Lanning the way that they did on Saturday night.

5) Let’s talk Baylor. You guys cool with that?

Iowa State’s next opponent is averaging 720 yards per game in six games this season.

“Baylor is the best offense I have ever seen in my life. That’s no exaggeration,” a bright football mind who I look up to texted me early this morning.

The Cyclones are 37-point underdogs for Saturday’s 11 a.m. kick.

6) Friday night was special for me. It marked the first time that my 8-month old daughter, Cami, attended an event inside of Hilton Coliseum.

Me to my daughter before leaving our house on Friday: “Honey, are you ready to go to church?”

I took her to “Hilton Madness,” where while she was too young to really understand what was going on, still was in awe of the bright lights, loud music and all around awesomeness that surrounds the sport of basketball in that building.

Last February, we thought that we were having a boy. When I saw that she was a little girl, not kidding, the first thing that popped into my head was excitement knowing that in the future, we would bond watching Iowa State women’s basketball together. It will be our thing. That all began on Friday night.

7) Hilton Madness wasn’t a perfect event, but it was a darn good one to take the family to on a Friday night. The highlight for me was watching Georges Niang interact with some guy named Marcus Fizer. That moment gave me and most other 31-year olds in the building goose bumps.

Deonte Burton won what was a pretty lackluster slam dunk contest with this gem. Shout out to Cyclones.com photog Luke Lu for the shot of Burton throwing one down in his Timberlands. Sick… 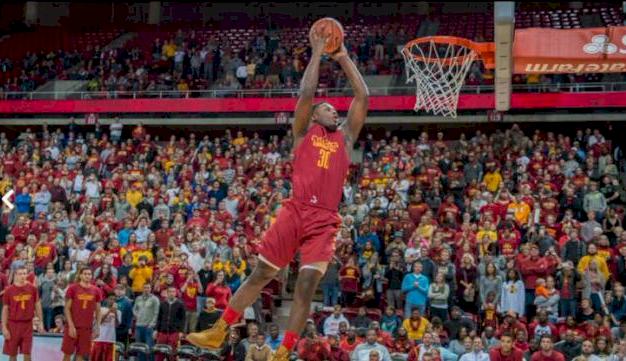 8) Hey if you guys haven’t read Rob Gray’s story on Monte Morris from last week, you need to. It might be the best piece of journalism ever published on this site.

9) Got questions for this week? Football or basketball, tweet at me (@ChrisMWilliams or @CycloneFanatic) with the hashtag #AskCW. More short and to the point videos are coming your way.

10) We’ve got a ton of hoops coverage coming up for you guys this week as the Big 12’s media day will go down on Tuesday in Kansas City. Rob Gray and Jared Stansbury will both be making the trip for CycloneFanatic.com.