Playing the second-ranked team in the country is rough, but you just have to execute your normal gameplan to perfection in order to compete in the game, right? Not there. Not in Waco. Not against Baylor. You have to wholly reshape your gameplan and then execute that new gameplan to perfection. I could talk until I’m blue in the face about what to do against this team, but the more amazing question is why you have to do this?

When I first got to Iowa State, the offensive and special teams staff showed us a chart to emphasize the importance of field position. It looked something like this, which is from footballoutsiders.com: 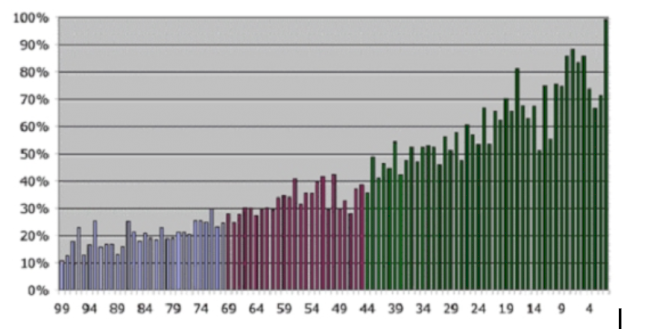 This may seem like a lot to process it is actually very simple. The numbers on the x-axis (the bottom, horizontal line) are how far away from the endzone a drive starts. This means that if the ball was kicked through the end zone on a kickoff, it would be a data point at 75, since it starts on the -25 yard line. The y-axis (the vertical axis) is the percent of those drives that end in touchdowns. This chart is from a national average in 2006, but stats today are roughly the same. Predictably, drives that start closer to the end zone are more likely to end in touchdowns. Why punt, then? If you can effectively pin the opponent inside the 20, the opposing team goes from having a 50% likelihood of scoring a touchdown to around 15%. So what does this have to do with Baylor?

Before I get there, I want to preface the rest of the article with some stats from Cyclone Fanatic’s Brent Blum.

Now that you have context, Iowa State must change its philosophy (as does every other team that plays the Bears). The drive chart for Baylor is INSANE. (compiled by @justusezekial on twitter)

Let’s dive into this for a second.

The national average for scoring touchdowns on drives that start on the 25 (so the distance after a touchback) is roughly 20 percent. Baylor? Try 83 percent!!

They are FOUR TIMES more likely to score touchdowns on average-length possessions. How about long fields – drives that start inside the 10, so 90 yards. National average? About 10 percent. Baylor, 43 percent.

Here’s something to chew on: Based on mathematics, a Baylor drive starting inside of 60 yards has nearly the same odds to end in a touchdown (89 percent) as an average NFL kicker hitting an extra point this year (93 percent via NFL.com). Let that sink in for a second. No matter how you parse this out, Baylor is exponentially better than average.

What does this mean? It means your entire gameplan has to change. Punting gains you a minimal advantage, if any at all. Unless you are 100 percent sure can pin them inside of the 10, the mathematical benefit of punting is gone. In short, there is no point in punting, especially if the 4th down distance is inside of five yards. On top of that, they are going to score touchdowns on atminimumevery other drive, so ISU will have to do everything in its power to keep them off the field.

Iowa State is staring down the barrel of a rocket launcher. The only way to stop them is to prevent them from pulling the trigger. Their gameplan has to be wholly different. Convention won’t beat them. Aggressive down and distance calls will keep them off the field. Execution and points on nearly every drive will allow you to stay in the game. A perfect game will allow you the chanceto win. Baylor mistakes on top of a perfect game make way for a victory, but the statistics say that’s not likely.