Mike Warren has splashed onto the scene in Ames.

After almost a full year of rumblings about him in practice and the constant praise of our own Jeff Woody, he broke out at Toledo. Traditionally you may not be impressed by a guy from a Big 12 school toting the rock 21 times for 126 yards against a MAC school. But Toledo limited perennial rushing power Arkansas to just over 100 yards total and their leading rusher on the season only amassed 54 yards on 20 carries. Also, they didn’t even record a sack against Arkansas to knock those total rushing yards down.

Of course, Warren followed that performance with another salty outing last week at home against Kansas. He tied the freshman record for yards in a game at Iowa State with 175 on just 18 carries.

To me, this young man is the spark of light that we all needed with accompanying credit to the rest of his mates on offense and in the coaching staff. The ground game has been the limiting factor over the years for Iowa State, especially in the Paul Rhoads era after Alexander Robinson left town.

But in his last two performances he hasn’t just spurred the offense on to bigger things he has become the “bread and butter” for the Cyclone offense. Their default when other things have proven futile. Though he is a freshman, he likely will need to – and from what we’ve seen so far – and should be leaned on even more. If his success continues he can continue to be that “bread and butter” option but more importantly cement himself as the identity of the unit. An identity that has largely been non-existent in the past few years and the blank to the question, “what does Iowa State do on offense when things are going poorly to get back on track?”

The football version of Georges Niang on the right block, if you will.

We’re only four games into this season and his career but if we take a look at things how does Warren’s production compare to previous ISU freshman running backs? What if we project that production out over the last eight games? And remember, Warren only logged nine carries in his first two games combined for a total of 28 yards.

I undoubtedly missed a boatload of guys from the 80’s and 90’s but I did my best to compile previous freshmen running backs at Iowa State and their rookie season numbers. Bear in mind that a lot of these guys weren’t the first option in their inaugural campaign but looking at the history Warren is chasing is still pretty fun.

I didn’t use any complex algorithms to predict his future production but I started with the assumption the staff will try to get him 15-20 rushes per game (I used 17) and that his rushing yards will drop a bit as the competition ramps up. Also, you have to figure that there will be some games where his touches will be limited if Iowa State is trailing and needs to sling the ball around.

I don’t like using the simple and inaccurate rush yards per game to gauge rushing defenses (especially so early in the season with small samples and varying competition) but it is really the only way to look at it right now to get some barometer. If you look at Iowa State’s remaining schedule of defenses and their rank in rush yards / carry (adjusted to remove sacks) it looks like this:

Point being, the rushing defenses maybe aren’t as stout as you would normally expect for some of the top performers in the Big 12.

In the end, I came out with the numbers below. The first line shows his numbers to date and the “Proj Mike Warren” are his season totals based off of my guesses. 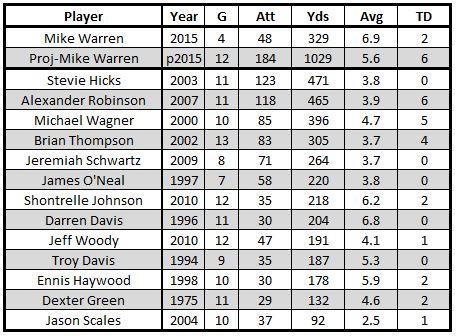 I think a season like that will leave us all happy with Warren and would likely point to positive success for the team as a whole. At the same time, that is a pretty realistic projection based off of what we already know.

And speaking of the Iowa State rushing attack as a whole; there are so many positive vibes in this area from the past two games in large part to Mike Warren but also as a team. For the first time since 2013, ISU accumulated 200 yards on the ground as a team in consecutive games. In Lubbock on Saturday, they’ll aim to make that three in a row, which has been amazingly rare.

Since Ennis Haywood graduated in 2001, the Iowa State rushing offense has been sporadic at best, sans 2009. But from 1995-2001 the Cyclones were renowned nationally for their ability to run the ball and that was proven with a 1,000 rusher in each of those seasons.

But here’s where it gets interesting even if it is more anomaly, randomness, or due to sack yardage than anything else.

Since the start of the 1994 season there have been just two instances where Iowa State managed 200+ yards in a game for at least three straight games. Once in 1999 through their first four games (Indiana State, Iowa, UNLV, and Kansas State) and the other in 2009 (Kent State, Army, Kansas State, Kansas, and Baylor).

Through the other years, seasons are littered with close calls to getting three in a row, but it has happened just twice.

In Lubbock on Saturday the Cyclones will aim to do it again.