Another week is down in this combat of excellent picks and the guy deferring to the computer picks is sitting at the top. 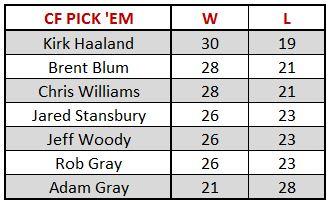 You know it is a big week for college football when Gameday goes to Philadelphia….wait, what?

Oklahoma State (-3) @ Texas Tech – The Cowboys have been good to me, so, Cowboys.

Texas (-6.5) @ Iowa State – I want to take Texas just from a weekly pick and strategic standpoint, but, let’s keep playing the homer card and roll Cyclones.

Mississippi (-7) @ Auburn – My percentage picking the SEC is roughly 0% this year. Give me Auburn. Mississippi 24 Auburn 19.

Oregon @ Arizona State (-2.5) – These two teams are identical. So I’ll take the home team and points.

Notre Dame (-10) @ Temple – Temple, Memphis, Baylor and TCU are all undefeated and Playboy is no longer doing nudes. If I knew this in 1997, I would’ve thought there’d be a better chance of flying cars. Temple puts up a fight. Notre Dame 31 Temple 23.

West Virginia @ TCU (-14) – After starting the season 3-0, the Mountaineers have hit the meat of their schedule. That hasn’t been a good thing as they’ve gotten beat fairly handily in two of those games. That trend continues as the Horned Frogs roll to a cover.

Mississippi (-7) @ Auburn – I still can’t believe I picked Auburn to go to the playoff. Rebels by two scores.

Oregon @ Arizona State (-2.5) – I’m having a hard time picking Oregon on the road with the quarterback struggles they’ve had so far this season, but I’m going to anyway. Ducks figure out a way to win.

Notre Dame (-10) @ Temple – My uncle used to work at Temple, they aren’t usually good and it’s in Philadelphia. That’s the extent of my knowledge on the Owls. But nonetheless, Owls shock the Irish and get their biggest win in program history Saturday night.

Oklahoma State (-3) @ Texas Tech – I would be with OSU all the way if this game was in Stillwater, but give me Tech in Lubbock. Raiders win on a late touchdown.

Texas (-6.5) @ Iowa State – Iowa State forces a turnover late in the game, then Joel Lanning leads the Cyclones down the field to set up a game-winning Mike Warren touchdown.

West Virginia @ TCU (-14) – Frogs. It’s in Fort Worth and I think there is a clear-cut way to beat the Mountaineers. It’s about forcing them away from a running game by pressing their defense. Advantage- Boykin & Doctson

Mississippi (-7) @ Auburn – Tigers. There is something about this inconsistent Ole Miss team that frightens me as a favorite on the road, even at Auburn.

Oklahoma State (-3) @ Texas Tech – Texas Tech wins outright and the police confiscate guns from everyone in the stadium, including the mascots. Guns up!

Texas (-6.5) @ Iowa State – I think ISU wins outright. The coordinator is finally in the right place. The defense will get rest with this new scheme. Texas players say dumb, inflammatory things. The team is fully in "us-against-the-world" mode. Plus the last two have been what I would call "close." ISU wins, and the man dressed as Ricky Williams for Halloween is extremely disappointed.

West Virginia @ TCU (-14) – The Mountaineers are an ordinary team, yet again, and the defense is sketchy. Trevone Boykin goes for 400-plus yards of total offense. Frogs roll and cover.

Mississippi (-7) @ Auburn – Hard to figure out this Ole Miss team. Memphis might really be that good. This smacks of a rebound game for The Tigers, though, who have been meh this season. Rebels won’t cover and might lose.

Oregon @ Arizona State (-2.5) – Both these teams are hard to figure out. They were supposed to at least contend for their respective division titles, but sit at 2-2 in Pac-12 play. Under these circumstances, give me Todd Graham’s home team.

Notre Dame (-10) @ Temple – Kudos to Temple, a longtime doormat until a few decent season recently, for its 7-0 start. Owls are solid, but Notre Dame is a different beast. I think the Fighting Irish roll into Philly and comfortable cover.

Oklahoma State (-3) @ Texas Tech – The Cowboys: Another 7-0 team I’m not totally sold on. Three of their four Big 12 wins have come by a combined 12 points. Tech’s D is awful, but I think Mahomes and Grant and Co. score enough to prevent a Cowboys cover.

Texas (-6.5) @ Iowa State – First thing: The Longhorns’ defense appears to once again be legit. That was the case last year, too, When ISU hung 45 points on them. I expect a non-Big 12 score for this one, but Joel Lanning makes enough big plays in his first start as ISU’s QB and the defense mostly contains Jerrod Heard and the Texas running game. Cyclones win 28-21.

Mississippi (-7) @ Auburn – Ole Miss appears to be getting some key guys back and that’s enough cover against a bad Auburn team.  Ole Miss by 13.