It is a scary week for Cyclone fans, hopefully not for the pickers too.

But at least we can find solace in the fact that Adam Gray is at the bottom of the standings. 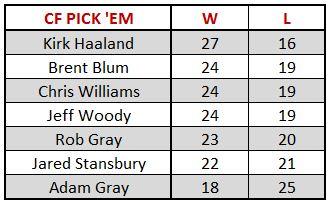 Northwestern @ Nebraska (-8.5) – Northwestern seems to be trending the wrong way and Nebraska is probably a little better than their record and one zillion close losses. Huskers.

Iowa State @ Baylor (-37) – The monsoon helps Iowa State cover but hopefully the running game does too. Maybe Joel Lanning will see an expanded role in that too…? Cyclones.

Kansas State @ Texas (-4) – Bold prediction: Charlie Strong will be at Texas longer than Bill Snyder is at K-State. Texas 31 K-State 17.

Texas Tech @ Oklahoma (-14.5) – The annual late October charge for Oklahoma is on. This is of course followed by the middle November collapse. Oklahoma 52 Texas Tech 28.

Utah @ USC (-3.5) – I actually think that USC will win this game but I want Utah and the points. I see this being a field goal or something close.

Kansas State @ Texas (-4) – Who the hell knows? I preached all offseason about how Kansas State simply isn’t as good this year. I’ve got to stick with it. I’ll take the refocused Longhorns by 10.

Texas A&M @ Mississippi (-5.5) – Ole Miss is down in the dumps, but I think this team is talented enough to run the table and still be in the Playoff conversation at the end of the year. I’ll take the Rebels at home.

Northwestern @ Nebraska (-8.5) – Two teams heading in opposite directions. Northwestern has been outscored 78-10 the last two weeks. Nebraska isn’t as bad as its record would indicate and Mike Riley is a pretty good coach. I like the Huskers here by 14.

Utah @ USC (-3.5) – Utahians. I am going to take Utah here to at least cover because that defense can travel. As of right now, Utah is second in the country in turnover margin at +12 through 6 games. USC? +3, so essentially even. I’ll take the Utes.

Kansas State @ Texas (-4) – DAMNIT WILLIAMS. ENOUGH KANSAS STATE PICKS. I love Bill Snyder, but he let me down last week and only apologized to the students and donors. I am going to go with Texas because I didn’t get an apology. So K State’s probably going to win. Horns.

Texas A&M @ Mississippi (-5.5) – A&M. Both of these teams have a redemption win on their minds. A&M beat themselves giving up 3 pick-6’s, where Ole Miss just got flat out beaten. I think A&M is the better team, so I’ll ride with them to cover.

Texas Tech @ Oklahoma (-14.5) – OU. Ol’ Stoops knows his only way into the playoff is to beat TCU and Baylor, but also to embarrass everyone else on their schedule. I think OU wins by 30.

Northwestern @ Nebraska (-8.5) – Huskers-  I called Iowa to lose to the ‘Cats without ever watching Northwestern play. Boy was that a mistake. Pat Fitzgerald’s team has a huge identity crisis. They throw ALL THE TIME with a redshirt freshman quarterback. Newsflash – they’ve scored A touchdown in the past two and a half games. Nebraska may not be all that good, but they aren’t that bad.

Iowa State @ Baylor (-37) – As I wrote the post, playing Baylor is a different animal. The rules totally change. You can’t turn it over. You can’t punt on 4th down. You can’t relax for a second on defense. You have to play perfect, and then you still have to rely on them to make mistakes. I think Baylor covers, and it pains me to say this because this may end up being a tough game to watch. I think they play close for the first quarter, maybe two, but Baylor’s explosiveness and speed is too much for a fatigued team to keep up with unless the Cyclones do something drastic. Baylor runs away and hides, 65-24.

Utah @ USC (-3.5) – Utes. Devontae Booker’s the real deal in the backfield. Trojans are a steaming mess.

Kansas State @ Texas (-4) – Bill Snyder better prepare another apology letter. Longhorns playing with some pride now and win this by a touchdown or more.

Texas A&M @ Mississippi (-5.5) – How much did the loss to Memphis damage the Rebels? A lot, I think. I’m going with Kevin Sumlin’s boys and maybe they win outright.

Texas Tech @ Oklahoma (-14.5) – Can the Red Raiders challenge the Sooners? Yes. Will they? No. OU’s angry and dangerous now.

Iowa State @ Baylor (-37) – What kind of mood will Art Briles be in? Charitable, I think. Cyclones play well and Bears somehow don’t cover.

Utah @ USC (-3.5) – The Coliseum is always a tough place to play and the Trojans will probably be hungry for an upset, but the Utes get the win anyway.

Kansas State @ Texas (-4) – With these two teams, your guess is as good as mine at this point. Texas covers.

Northwestern @ Nebraska (-8.5) – I’m going to hate myself for this. Nebraska covers, easily.

Iowa State @ Baylor (-37) – Earlier in the week I would’ve been taking the Bears to cover, but the weather forecast has me thinking otherwise. Cyclones hang around for a quarter but that’s about it. Bears win but don’t cover.