Last week was a successful one in these parts. A few fellows went 7-1 and no one did worse than 5-3. For a moment, that may almost make you think we know what we’re talking about. Or, we just got lucky.

The only notable item on the standings is that Adam Gray is still at the bottom. This fact will definitely not humble him in any way. That’s kind of why we love him though. 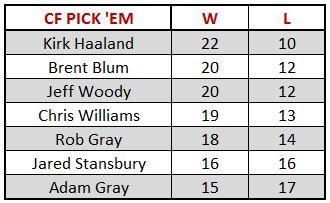 Oklahoma (-14.5) vs. Texas – Players tweeting what they shouldn’t, Bevo is gravely Ill, and they’re coming of a 40+ point loss to TCU. What could possibly go wrong? Things can’t get much worse and I want to go contrarian and say that Texas will rise up and impress…but, I just don’t think they will. Boomer.

Oklahoma State @ West Virginia (-6) – The guys that do all of the fancy math like the Pokes to win this one outright. That seems a little crazy in M’town, but, they know more than I do. OSU.

Wisconsin @ Nebraska (PK) – I know Nebraska is kind of a dumpster fire right now, but I think they’ll get the job done in Lincoln.

Iowa State @ Texas Tech (-11.5) – Texas Tech really struggles with defending the run and the Cyclones have gotten the rushing game on track in the last two outings with young Mike Warren. That should mean that the Cyclones can make some things happen on offense. But, winning would require finishing drives and getting points when the opportunity is presented. They’ll also need some turnovers to force stops more often than what they have been creating this year. I think the rush game and defense keeps it close but failure to notch points and get turnovers gives the Red Raiders the win. ISU.

Oklahoma (-14.5) vs. Texas – It always seems Texas puts up a fight in this game even when at a talent disadvantage. That extra half point should scare everyone. Oklahoma 34 Texas 21.

Oklahoma State @ West Virginia (-6) – WVU safety Karl Joseph may have been the best player in the Big 12 that nobody knew about. That is a HUGE loss. I still think WVU Mounts up for this one. WVU 38 Oklahoma State 28.

Wisconsin @ Nebraska (PK) – Texas and Nebraska have combined to win fewer games than Baylor and we are in early October. 15 years ago that would blow your mind. Nebraska 27 Wisconsin 21.

Miami @ Florida State (-9) – Des Moines debuted a Classic Hip-Hop station this week and it reminded me of those epic Miami-Florida State games. Now, this game is like an old, washed-up rapper doing free shows at the state fair. Sad. Florida State 28 Miami 24.

Iowa State @ Texas Tech (-11.5) – As I referenced earlier this week, Iowa State needs to go to the Bill Snyder school this month. Slow the game way down. This goes down to the wire. Texas Tech 33 Iowa State 31.

Oklahoma (-14.5) vs. Texas – Boomer. This game goes one of two directions. 1) The rivalry game galvanizes the Longhorns and they pull together a tight game despite all the Twit-stractions that have gone on this week or 2) OU wins by 40. I’ll take the latter.

Oklahoma State @ West Virginia (-6) – Eers. There is something about playing in Morgantown that is just a little odd. You could sled from the middle of the field to the sideline because it’s weirdly highly sloped.  Also, OSU is pretty suspect on the road. I think Gundy’s zebra-striped luck runs out.

TCU (-7) @ Kansas State – Frogs. This is one of those lines that is a catch-you-off-guard type until you think about it. The way KSU plays is really uncomfortable for spread offenses. It’s like playing Wisconsin in basketball. The goal of a spread offense is to make you uncomfortable by how fast they can score and get a lead. If you take away the time they have to do that, their advantage is gone and the spread team now has to play your pace. No one does that like the Vampire. That being said, I think Boykin has, and will continue to, live up to his lofty preseason expectations.

Wisconsin @ Nebraska (PK) – Badgers. I have seen nothing from the Huskers to make me think they are anything worth anything this year. It’s a square peg in an N-shaped hole in Lincoln for Mike Riley. They calls for his job start to shake the ground 5 games into his coaching career.

Miami @ Florida State (-9) – Miami – Sean Taylor and Ray Lewis record 12 tackles each and Willis McGahee runs for 2TD’s. Dalvin Cook has a tweaked hamstring, and so far has been FSU’s only reliable offensive threat.

Iowa State @ Texas Tech (-11.5) – Clones. I will go so far as to take them outright, but I like the 11.5 point cushion that I have. Despite the nature of these offenses, whoever wins rushing will win this game. Washington is extremely quick and can cause huge trouble if they don’t get him corralled, and Warren has another opportunity for a big game. Long live Big XII running backs.
Go State.

Oklahoma (-14.5) vs. Texas – Been reading that the talent differential between these two teams is only like 10 to 11 points. Texas.

Oklahoma State @ West Virginia (-6) – In Morgantown? I’ll take Holgy over an Oklahoma State team that has yet to impress me this season.

TCU (-7) @ Kansas State – I wrote about this on Thursday in "three thoughts." I like a TCU team that is finally hitting on all cylinders here big. Forget about the vampire stuff for one week.

Wisconsin @ Nebraska (PK) – I don’t have a clue. I guess I’ll take the home team considering it’s a straight pick.

Miami @ Florida State (-9) – I’d be a liar if I told you I knew a ton about Miami. I don’t. Week by week though, Florida State is proving to me that it just might be for real. Seminoles cover.

Iowa State @ Texas Tech (-11.5) – I went out on a limb and picked Iowa State outright so of course, I’ll take the Cyclones and the points.

Oklahoma (-14.5) vs. Texas – Now Bevo is sick. Very sick. Bad times in Austin all around get worse. Baker Mayfield will have a field day. Sooners cover easily.

TCU (-7) @ Kansas State – Vampires can’t stand garlic. Or so I’ve read and seen. Guessing the same goes for Horned Frogs, who will cover in Manhattan.

Miami @ Florida State (-9) – The ‘Canes ain’t very good, coach. But Florida State? Not sure how good the ‘Noles are either. Everett Golson steps up and FSU rolls.

Iowa State @ Texas Tech (-11.5) – Given injuries for Tech and ISU’s resurgent run game, I like the Cyclones. Good times roll in Lubbock amid the tumbleweeds. Warren goes for 100-plus again. ISU 38-35.

Oklahoma (-14.5) vs. Texas – I’m starting to really come around on Oklahoma and I’m doing the exact opposite with Texas. Boomer Sooner rings throughout Dallas and OU rolls to a cover.

Oklahoma State @ West Virginia (-6) – I can’t get a read on either one of these teams, but Morgantown is a tough place to play. Mountaineers cover.

Wisconsin @ Nebraska (PK) – Please see this week’s episode of The Seniors for my thoughts on Nebraska. Wisconsin wins.

Iowa State @ Texas Tech (-11.5) – I think Iowa State is going to be able to move the ball in this one and Mike Warren has another big day, but Tech’s offense is too much. Cyclones cover but Red Raiders win by a touchdown.

Oklahoma (-14.5) vs. Texas – I think Texas responds in this game and makes it competitive for the first half, but in the end Oklahoma is too experienced/talented and backdoors a cover.  OU by 17.

Oklahoma State @ West Virginia (-6) – Give OSU credit, they keep finding ways to win.  But they keep escaping teams that they are better than.  I don’t think they’re better than WV and I think their mistakes catch up to them.  WVU by 13

TCU (-7) @ Kansas State – Kansas State gave up 441 yards passing to Mason Rudolph.  What happens when Boykin and co come to town?  KSU’s QB situation is to banged up to keep up in this game.  TCU by 24

Wisconsin @ Nebraska (PK) – Neither team is very good.  Give me the home team.  Huskers by 3.

Miami @ Florida State (-9) – Florida State hasn’t had an offensive TO all season.  That has to change at some point.  I think Miami forces 3 TO’s and this is a tight game throughout.  FSU kicks a late FG for a 3 point win.

Iowa State @ Texas Tech (-11.5) – Iowa State covers.  I think it’s a very winnable game and one ISU desperately needs, but I just don’t trust the offense to make the plays when it needs to.  So I’m guessing a loss w/ a cover.