This week was, uh, interesting to say the least in the land of Cyclones. But, a lot of that is seemingly behind us now and it is time get back to Iowa State Football. The bye week was pretty harsh on us pickers as most of us struggled to find a way to get to .500 for the week.

But, like the ISU football team is looking to bounce back and make some hay for the rest of the season, so is the CF staff with their game predictions.

Here are the standings (note Adam Gray’s placement…you maybe should point this out to him when he see him). 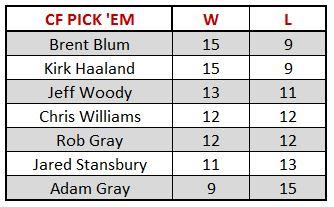 Alabama @ Georgia (-2.5) – Georgia is the better team. But Saban vs. Richt is not fair. I’ll still take the better team and will probably be angry about itSaturday night. Georgia 24 Alabama 20.

If the Hawks win this game, they may actually sell out a game for the first time since Iowa State visited Kinnick in 2014. The Iowa kicker will probably make a 75 yard field goal as time expires. Iowa 27 Wisconsin 24.

Kansas State @ Oklahoma State (-8) – This has vampire Bill Snyder written all over it. One of those games where K-State has two special teams scores and sucks the life out of the Cowboys. K-State 30 Oklahoma State 28

Texas @ TCU (-15) – Texas complaining about a Big 12 conspiracy is the best. The Cubs may actually win the World Series, the world is ending. TCU 45 Texas 34.

Notre Dame @ Clemson (PK) – Dudes named Dabo probably shouldn’t be trusted but I think Clemson pulls it off at home.

Iowa @ Wisconsin (-7) – I’m not really sure on Iowa yet, even after their 4-0 start. I think they’re good, I just don’t think they’re win in Camp Randall good. I will take them to cover though.

Texas Tech vs. Baylor (-17) – I’m not sure on the morale in Lubbock after a loss that came in a similar way to a Missouri – Nebraska game 15ish years ago, but I think they can play while Baylor has had some issues. I’m not feeling good about this, but I’ll take Kliff and his aviators.

Kansas State @ Oklahoma State (-8) – Bill Snyder does Bill Snyder things on the road and gives the Cowboys all they can handle. Cowboys eek out another one but KSU covers.

West Virginia @ Oklahoma (-7) – West Virginia is being lauded for the defense which is supposed to translate for road games. It may well do that, but I think the Sooners win and cover.

Kansas @ Iowa State (-16) – Kansas is pretty bad, y’all. And, while many will point out that Iowa State has spent some time on the struggle bus this year I do believe that they are showing signs of an improving team without the results to fully back it up. Iowa State wins AND covers.

Alabama @ Georgia (-2.5) – Roll Tide. I think the last time Nick Saban lost back-to-back games since Nick Chubb was a Chubb-y baby. Get it? Chubb-y? I’m sorry. I think Chubb gets his, but Bama has too much firing coming off a loss.

Notre Dame @ Clemson (PK) – Tigers. I figure at some point picking against Notre Dame I’m gonna be right once. Plus, Georgia Tech gave a little insight towards the second half as to how to attach the Irish defense.

Iowa @ Wisconsin (-7) – The U of I. I don’t know if the Hawks win this one, but I really feel like any game that CJ Beathard is playing quarterback for the boys from the east side they are going to be in it. He’s too calm, controlled, and effective to get blown out in a game.

Texas Tech vs. Baylor (-17) – Bears. Reason 1– Tech won’t have any emotional juice left for this game. Reason 2- It’s in Waco, and Baylor is invincible there. Reason 3- I think Mahomes is more banged up than is being let on. In order to be within 17 points, the Red Raiders are going to have to hang at least 45 on the board, and I don’t think they do that

Kansas State @ Oklahoma State (-8) – Cowboys. If this was in Manhattan, I would take the Fighin’ Snyders straight up because OSU is a wholly less consistent team on the road. I will take the home team to click and put some points on the board, and I don’t think the Cats can match them score-for-score.

Texas @ TCU (-15) – I’ll take the Frogs to win, Horns to cover. Emotionally, that last win took a lot out of the Frogs. They’ve lost a few more players, bringing the total up to roughly 1,200 this season. Also, Texas is going to be at about 200 degrees after what happened last week. The line is a bit high for me to take the purple toads.

West Virginia @ Oklahoma (-7) – Boomer Sooner. For my money, Oklahoma is the best team in the conference. West Virginia has also not played a good team yet. OU has. This one will start big for the Sooners, WVU makes it close in the middle of the game, but the home team pulls away.

Kansas @ Iowa State (-16) – YES. A 16 POINT FAVORITE. I will take the Cyclones to cover big here. I think that speaks to the improvement of the Clones from years past, but more so to how awful Kansas is. Mike Warren is starting to get it and Kansas is giving up 250+ yards rushing per game against South Dakota State (at home), Memphis (at home), and the coachless Rutgers Scarlet Knights. It all comes down to Iowa State coming out ready to play. If they don’t, KU covers. If they do, ISU wins 35-9.

Alabama @ Georgia (-2.5) – Name the last time that Georgia won a big game…I’m waiting…So I can have Nick Saban over Mark Richt and still get a couple of points? Bama.

Notre Dame @ Clemson (PK) – The injuries will finally add up for the Irish, who are on the road vs. A more athletic team. Clemson.

Iowa @ Wisconsin (-7) – I actually like Iowa to win this game outright.

Texas Tech vs. Baylor (-17) – Why is this spread so high? It’s because of where it is on the schedule. Tech is coming off of two emotional games and despite its rivalry with Baylor, I am fully expecting a letdown. Briles and the Bears by 24.

Texas @ TCU (-15) – The most difficult game of the week to pick in my opinion. Remember what Texas did at Notre Dame though? Is this team that much better? Give me TCU by three touchdowns and the issues in Austin will continue.

Kansas @ Iowa State (-16) – When does Iowa State blow anybody out? I do think the Cyclones are much better this year though. I guess I’ll take them at home.

Alabama @ Georgia (-2.5) – I love Georgia’s Nick Chubb. Great player. Better name. And he’s only 19? Yowza. But I think ‘Bama’s still for real and the defense will show up strong. Bulldogs don’t cover.

Notre Dame @ Clemson (PK) – So … Clemson. Planning to underachieve again this season? Asking for a friend. While waiting for the answer, I’ll stay on your shiny orange bandwagon for now. Tigers win it.

Iowa @ Wisconsin (-7) – Is Camp Randall worth seven points? I’d say it’s worth five points — and think Wisconsin’s at least a field goal better than the Hawks. Good game, but Bucky covers by a smidge.

Texas Tech vs. Baylor (-17) – Another over-under humdinger. But we’re talking spread and I think Baylor’s quite a bit better than Tech. The Bears will put up 60 and cover, but not by much.

Kansas State @ Oklahoma State (-8) – This seems like a small number, but the ageless Bill Snyder works in mysterious ways. Someday “Ancient Aliens” will do a show on him.  Somehow, someway his teams always get better as the season wears on. No cover for the Cowboys.

Texas @ TCU (-15) – Charlie Strong’s bunch needs a win so bad and, dang it, they run into Trevone Boykin. Good luck bottling up the Heisman contender, but I reckon the ‘Horns hang around. No cover for the Froggies.

West Virginia @ Oklahoma (-7) – Hmmm. Don’t know what to make of the musket-toting Mountaineers, who pummeled Maryland last weekend. Is WVU ever consistent? I think not. Boomer. Sooners roll on and cover.

Kansas @ Iowa State (-16) – Big, big number for ISU to cover, but Kansas is worse than much if not all of the FCS Top 25. Maybe top 35. So Cyclones rush for 200-plus again, Quenton Bundrage breaks out and defense shines. Cyclones will cover by halftime and build from that.

Notre Dame @ Clemson (PK) – I picked the Irish to go to the playoff, but it is so tough to play at Clemson at night. #Clemsoning trends again when the Tigers turn the ball over late. Notre Dame wins 24-21.

Texas Tech vs. Baylor (-17) – Not sure what to think about this line after Tech played right with TCU last week. I think the Bears get the win but don’t cover, 55-52.

Texas @ TCU (-15) – Some people are buying into Texas after they nearly beat Oklahoma State last week, but not me. Treyvone Boykin is way too good for the Longhorns to sniff an upset. Frogs win and cover 42-21.

Notre Dame @ Clemson (PK) – Give me the home team playing at night.  Clemson by 6.

Texas @ TCU (-15) – Texas is improving and TCU seems to be treading water.  I think this game is closer than people think.  TCU scores late to win by 10.