This past Saturday while we were all shoe-horned in to Jack Trice Stadium to watch the 2015 Cy-Hawk game, there was a pertinent game to Cyclone fans unfolding in Arkansas differently than any of us probably would have guessed. I got word from fans as I was crossing the parking lot east of the stadium, “Toledo beat Arkansas!”

To be fair, the game wasn’t in the familiar confines of Fayetteville for the Razorbacks, but it was clearly much more of a home field advantage for Arkansas.

But the real question for all of us because it will impact our rooting interests this Saturday is, “how did it happen and how good is Toledo?”

BELOW: The Rockets celebrate after topping Arkansas 16-12 last Saturday. 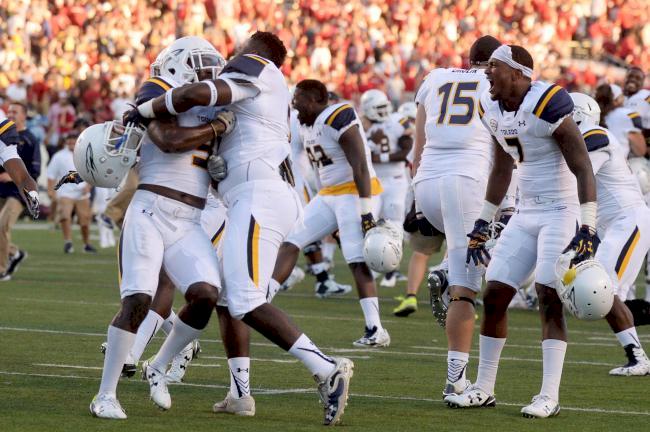 It is early in the season and this was Toledo’s first game, which means we pretty much only have this game to analyze. So, how did Toledo do it? The info and data is to follow but there is a definite feel that Arkansas lost the game more than Toledo won it. Now, let me explain.

The first point worth mentioning is that it was a very low possession game, which typically is a method for less talented teams to try and hang in games. While that is the case and you would maybe think that Toledo was responsible for making that happen to enhance their chances to win, you’d be wrong. Arkansas possessed the ball for more than 37 minutes.

Take a look at the Arkansas drive chart: 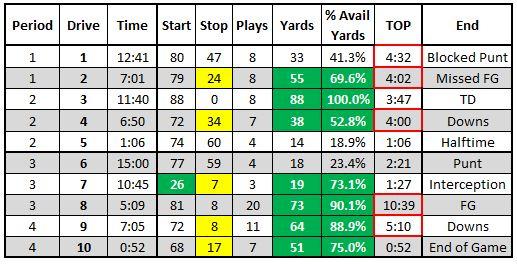 The “Start” column is the starting field position in distance from goal (80=own 20 yard line), the column labeled “Stop” is where the drive ended, and “% Avail Yards” is the yards gained on the drive compared to the most possible yards that could have been gained for a percentage of yards gained, and the rest should be pretty self-explanatory.

Seven of the offensive drives for Arkansas consumed over 50 percent of available yards (cells highlighted in green). Is that good? Yes, the 2014 FBS average was 48 percent. While that is impressive, six of those drives consumed 69 percent of available yards. The point being that Arkansas consistently marched up and down the field on Toledo’s defense. Also, the last Arkansas drive of the first half was moving down the field in the first four plays until they just ran out of time.

Finally, five of the drives ate up at least four minutes of game clock as they marched down the field but those drives only amassed a total of three points. Those drives alone accounted for more than 28 minutes of possession for the Razorbacks.

I’m not here to say that Toledo isn’t a good football team but I think it’s okay to analyze how the game was won and pump the brakes a little bit.

One interesting way that we can break down teams is by looking at the preferred direction for them to run plays and the success rate of those plays that went either left, right, or up the middle. That is all compliments of cfbanalytics.com and more of this type of data is in our future.

How did Arkansas look against the Toledo defense? Certainly not like we would’ve guessed. The powerful Bret Bielema running attack was not so powerful but the aerial attack racked up the yards in a big way.

Below shows the Razorback’s offense as it broke out by direction and running plays or passing plays. Each row is formatted for the most frequent to be red and least to be blue with the variances of shading in between them.

They found little success on the ground but the success they did have was to the left and up the middle of the Toledo defense for nearly four yards per carry. Meanwhile their passing attack was slinging it everywhere for big gains everywhere. The Toledo defense definitely contained the rushing game but it may have cost them passing yards in turn.

Also of interest for us Cyclone fans is the Toledo offense and how they were able to get the job done against Arkansas.

Last season Toledo dominated on the ground with a really strong offensive line and a stable of qualified running backs. I’m not entirely sure on the expectations for the Rocket offense but while they only ran the ball for 3.73 yards per carry in total they were able to do a lot of damage in the middle of the field with their ground game. In rushing plays up the middle they averaged over 5.5 yards per carry which accounted for 19 percent of the total yards and 18 percent of the total plays called. That only heightens the return and play of DeMond Tucker.

The Toledo offense found some success through the air and interestingly they were rewarded for their brazenness to throw the ball over the middle. Thirty percent of all play calls resulted in passes to the middle of the field and the result was almost 42 percent of all of the yards for the offense.

In a game that was featuring two excellent rushing attacks it was the defenses the won out with most of the battles in the ground game. With that, Toledo proved that they are capable throwing the ball around the field and that the Toledo defense also appears to be susceptible to the passing game.

Toledo is probably a pretty good football team. But, based off what we know so far I think it is fair to wonder if they’re eight points better than Iowa State as the current point spread suggests. And, while they deserve full kudos for their win over an Arkansas team that was expected to have a good year, I also think it is fair to say it was a little bit fluky.

Arkansas didn’t just rack up yards upon yards but they were consistently threatening to score. It wasn’t as whacky as the Iowa State win in Lincoln in 2009 with eight turnovers, but it was entering that neighborhood.

It is a winnable game for Iowa State that can help steer the rest of their season in a positive direction.