Every single season during the week of the Iowa State – Iowa football game, there has been a major talking point that has been consistent among fans of both teams and the media that I have observed since paying close enough attention; can the Cyclone offensive line hold its own against the Iowa defensive line?

I swear, it gets talked about every single year. Every. Single. Year.

To be fair, the Iowa defensive line usually is loaded with future NFL draft picks. From Mitch King to Adrian Clayborn, Jonathan Babineaux to Carl Davis, and Mike Daniels to Colin Cole.

I specifically remember in 2008 hearing Ken Miller on KXNO (who I really like and generally enjoy his thoughts and opinions) say, “Adrian Clayborn was going to eat Matt Hulbert’s lunch. Hulbert can’t block him.”

The difficult part of analyzing a situation like this is trying to quantify the battles that go on in the trenches. There really is no empirical data that can tell you that the offensive line or defensive line outplayed its counterpart. But there are indirect stats kept that can point us to which unit seemed to win the battle for the day.

If you know me, you know I had to investigate further to see where the data takes us.

I compiled four main categories over the past 10 seasons to take a look at if the Cyclone offensive line was often up to the task of keeping Iowa’s many future NFL defensive linemen at bay. Those categories are Iowa State’s yards per carry, Iowa State’s completion percentage, the percentage of time that Iowa notched a sack when the Cyclones dropped back to pass, and the percentage of completions and running plays where Iowa tackled the Cyclones for a loss.

I think the justification for those should be pretty intuitive but the main focus is trying to see if Iowa State could run the ball (yards per carry and the percentage of plays that were rushing attempts for reference) and if the Hawkeyes were able to put pressure on the ISU offense either by sacks, tackles for loss, or rushing the pass attempt to force an incompletion.

For each team, I compiled the season long numbers that they accrued for all other games that they played without the Cy-Hawk results included to set the season long averages. For each category Iowa State is in the first column and Iowa in the second column. In the third column of each category you can see the actual result from the game. The Cy-Hawk column is then highlighted red in instances where Iowa held the Cyclones below the season average and green where ISU performed better than average. In some cases ISU did worse than their season average but Iowa did better so it was a judgment call (example: 2010 sack percentage).

(Note: all of this data is in perspective of the Iowa State offense and the Iowa defense.)

In one major way the Iowa defensive line has mostly dominated over the years in that the Cyclones have rarely been able to run the ball effectively. Though, in most years the season average for Iowa State’s yards per carry is nothing to be impressed with in the first place.

In the past 10 seasons, Iowa State has protected the quarterback better against Iowa than the average against the rest of opponents and better than Iowa did against the rest of their opponents seven times. When you look at the percentage of completions and running plays that resulted in a tackle for loss, the Cyclones have won that battle nine times.

(Note: there have been two to four games where ISU opted to pass the ball 60 percent or more of the time which would in turn make it more likely that Iowa can’t hit the average tackles for loss percentage.)

Given that Iowa State hasn’t had gobs of success running the ball, this speaks to the likelihood that they have typically been able to attack the Iowa defense at the weakest spots and avoid what is usually one of their biggest strengths.

Perhaps it is the Super Bowl every year for the Cyclone offensive line, or perhaps the Iowa defensive line often under performs, or perhaps the gap isn’t as big as we’re lead to believe between the two units. Either way, the talking point has rarely fully transitioned to the actual game in the past 10 years.

Keep that in mind with the Drew Ott vs Jake Campos talk.

It is actually kind of a similar topic to the one above; an overly optimistic perception of Iowa that has generally not rung true in recent history. Below is a chart showing the spread and result of every Cy-Hawk game back to 1977 (sans 1982).

The column with the betting line cell color as red indicates an Iowa State cover and if it is black it is an Iowa cover. The scores listed in red indicate an ISU victory and the scores in black text show an Iowa victory. 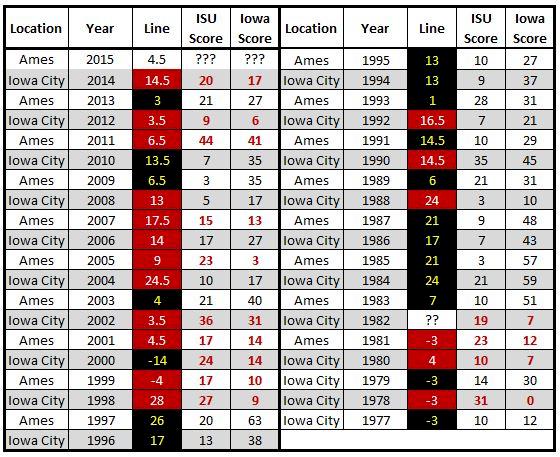 This is the most anticipated game every season in this state, especially for those fans that are closer to being considered a casual fan. Even for us diehards it is a big deal, but the overall importance from our stance is dampened a little bit.

This year it is a really big game, even to me.

But not because it is the annual intrastate rivalry game against the rival to the east. Instead the weight of the game lies in the fact that a team struggling greatly over the past two and a half seasons still needs success to solidify them. A 1-1 start with a win over an FCS team is still a program full of doubt and uncomfortable questions. But a 2-0 start with a win over a Big Ten team that looked very good in week one before heading out to Toledo to start 3-0 would be a team at a whole different level.

A team brimming with confidence that has the appearance of a corner turned and the past behind them instead of still looking for which path to take.